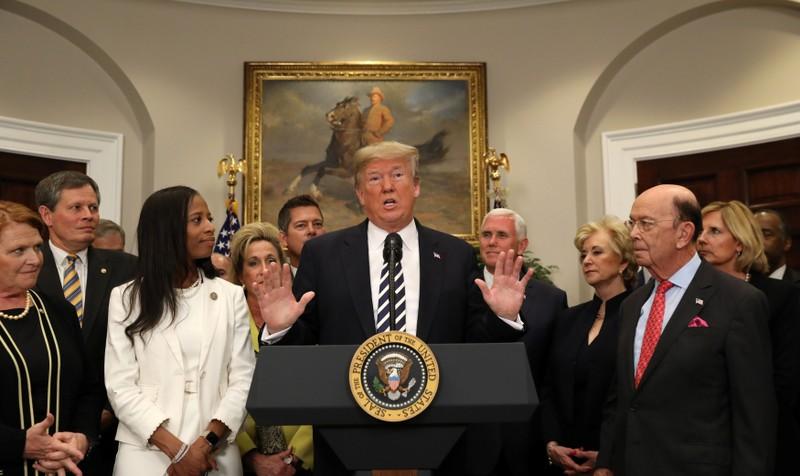 The legislation reworks parts of the 2010 Dodd-Frank financial reform law and is primarily aimed at easing rules for smaller community banks. It also includes provisions helpful to all but the nation's largest lenders. Here are the winners and losers.

BANKS WITH LESS THAN $250 BILLION IN ASSETS

The bill would raise the threshold by which a bank is considered systemically significant, and subject to stricter oversight, to $250 billion from $50 billion. Banks above that threshold are more closely monitored by the Federal Reserve.

That provides some relief to firms like BB&T Corp, American Express Co and Fifth Third Bancorp. At the new higher level, all but a dozen of the nation's largest institutions are carved out of that added layer of scrutiny, although the Fed retains the power to apply the label to banks between $100 billion and $250 billion should it choose.

The bill hands significant relief to custody banks that hold assets like securities on behalf of clients, like BNY Mellon Corp and State Street Corp, by allowing them to exempt customer deposits they place with central banks from a stringent capital calculation requirement.

That provision is a rare example of relief targeted specifically at some of the nation's largest banks, although it only applies to a small handful of firms that are not considered to be among the traditional Wall Street banks.

Banks with less than $10 billion in assets are exempted from a host of regulations under the bill including the so-called Volcker Rule barring banks from making risky bets with their own money. They are also exempted from some mortgage lending rules and heightened capital and leverage requirements, provided the institution holds enough equity.

Banks that issue fewer than 500 mortgages a year and are in good standing with regulators would also not be required to report certain data to the government.

The first significant relaxing of bank rules in more than a decade includes very little aimed at easing rules for the nation's largest banks. Big Wall Street banks lobbied unsuccessfully for a host of changes that were ultimately unpalatable for Democrats.

While big bank critics had fiercely opposed the legislation, it does not contain many of the provisions most sought after by Republicans who say Dodd-Frank went too far.

The bill makes no changes to the U.S. Consumer Financial Protection Bureau. It also does not touch most of the core pillars of Dodd-Frank designed to protect safety and soundness.