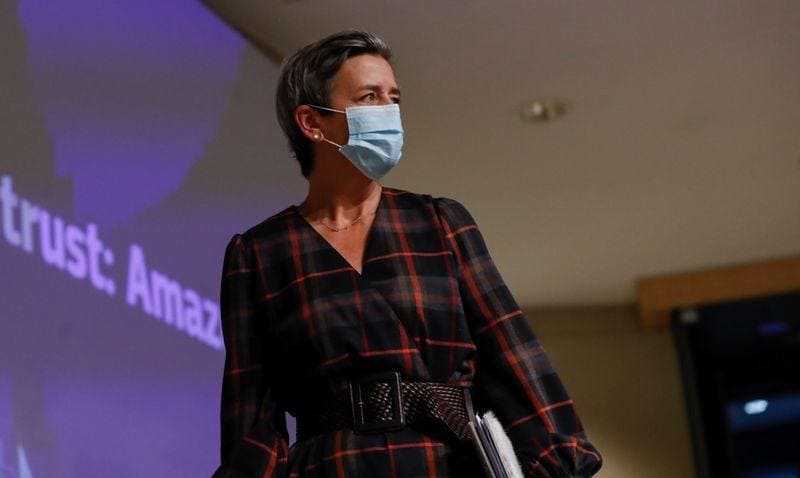 Vestager has challenged Silicon Valley's biggest names on a range of issues and has levied record fines against them.

The following are some of the other antitrust and regulatory cases involving the European Union and major tech companies:

The European Union has been at the forefront of scrutinising antitrust issues against Alphabet's Google since launching its first investigation in 2010.

Google is facing total fines of more than 8.2 billion euros ($9.7 billion) relating to three separate cases over the past three years, although it is contesting the penalties.

The EU competition enforcer handed down a 2.4 billion euro fine to Google in 2017 for favouring its own price-comparison shopping service against those of smaller European rivals.

In 2018, Google was given a record 4.34 billion euro fine for using its popular Android mobile operating system to block rivals.

Apple is being investigated by EU antitrust regulators over its App Store and mobile payment system Apple Pay.

A smaller rival filed a similar grievance related to e-books and audiobooks in March this year.

Vestager has also put Apple at the heart of EU efforts to make U.S. tech giants pay more taxes. In September, Vestager appealed a court ruling dismissing her order for Apple to pay 13 billion euros in Irish back taxes, a landmark case in the European Commission's crackdown against sweetheart tax deals.

EU antitrust regulators are investigating how Facebook collects and monetises its data, the European Commission said last December, opening a second front after an inquiry into its online market place was launched in 2016.

U.S. chipmaker Broadcom agreed last month to scrap its exclusivity deals with TV and modem makers in a deal with EU antitrust regulators aimed at ending a year-long investigation without a finding of wrongdoing, the European Commission said.

The Commission had launched an investigation into the company in June last year and even threatened to issue an interim order, its first in almost two decades, to stop such practices while the probe was ongoing.

The EU is investigating whether Qualcomm engaged in anti-competitive behaviour by leveraging its market position in 5G modem chips in the radio-frequency chip market, the San Diego company said in February.

Qualcomm was fined 242 million euros by the European Commission in July last year for blocking a rival from the market about a decade ago, its second EU antitrust penalty.

The Commission had also fined Qualcomm 997 million euros in 2018 for paying iPhone maker Apple to use only its chips.