Explainer: How were more than 100% of GameStop's shares shorted?

By John McCrank NEW YORK (Reuters) - One area of focus from a U.S. House of Representatives panel on Thursday will likely be on the role short selling played in the GameStop market mayhem. Executives from trading platform Robinhood and hedge funds Melvin Capital and Citadel will be grilled following the retail-driven trading frenzy that sparked wild gyrations in GameStop and other heavily shorted stocks. 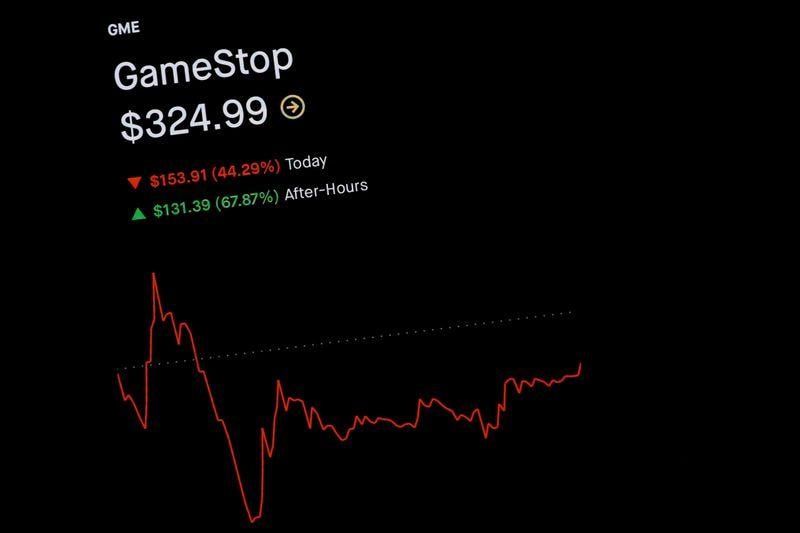 NEW YORK (Reuters) - One area of focus from a U.S. House of Representatives panel on Thursday will likely be on the role short selling played in the GameStop market mayhem.

Executives from trading platform Robinhood and hedge funds Melvin Capital and Citadel will be grilled following the retail-driven trading frenzy that sparked wild gyrations in GameStop and other heavily shorted stocks.

Short selling, details of which are included in the memorandum https://docs.house.gov/meetings/BA/BA00/20210218/111207/HHRG-117-BA00-20210218-SD002.pdf about the hearing, can be a positive move, as it can be used in hedging positions, more accurately valuing prices of stocks and exposing frauds, like Enron and Theranos.

But Vlad Tenev, broker Robinhood's chief executive officer, recently pointed out that some of the stocks involved in the "meme stock" rally were more than 100% shorted, implying that more shares were shorted than were available to trade.

"I just think that's pathological," he said on the All-In Podcast https://www.youtube.com/watch?v=HopEdff0RCU late last Friday. "You end up with this situation that could destabilize the financial markets."

HOW DOES SHORT SELLING WORK?

Typically, shorting a stock is a bet that the share price is going to fall.

Short sellers borrow shares from brokers and then sell them into the market, with the agreement that they will buy the shares back and return them to the lender at an agreed upon time. The shares can come from the brokers' own inventories, or from customers that have allowed the brokers to lend out their shares.

When it's time to return the shares, if the stock price has fallen, the short seller can buy the shares back at a lower price than they originally paid for them, locking in a profit.

If the price has risen, the short seller must buy back the shares at the higher price, incurring a loss.

In the meantime, the short seller pays the lender interest on the value of the stock, giving the lender extra income.

IS IT RISKY TO LEND OUT SHARES?

Not really. The borrower posts collateral, typically https://www.interactivebrokers.com/en/software/glossary/content/glossary/shortsale/collateral.htm 102% of the prior day's settlement price. The borrower can also request the shares back at any time.

HOW CAN MORE THAN 100% OF A COMPANY'S SHARES BE SHORTED?

Once the short seller borrows the shares from the lender and then sells them back into the market, the new owner of the shares is free to lend them out, just as the previous owner did, and have no idea they are on the other side of a short sale.

Settlement time is two days after the transaction. In that time, the same shares can be lent out again, and again. This makes it possible, on paper, for more than 100% of the float of a stock to be shorted.

According to financial analytics firm S3, GameStop's peak short interest was 141.8% of its float on Jan. 4.

S3 argued in a recent research note that the traditional method of calculating the percentage of float is flawed because it uses stale data. U.S. investors are required to mark their shares shorted and regulators report these figures twice a month, with a 10-day delay, S3 said.

There have been calls since the GameStop saga to improve transparency around short selling through more frequent reporting.

When the price of a heavily shorted stock soars, short-sellers are forced to buy the shares back at a higher prices to close out their positions, pushing the stock price even higher.

ARE THERE RESTRICTIONS ON SHORT SELLING?

Yes. In 2004, the U.S. Securities and Exchange Commission prohibited naked short selling, which is the practice of shorting shares before having borrowed them, except in some cases, such as when a market maker is providing liquidity.