By Brian Ellsworth CARACAS (Reuters) - A group of creditors has demanded payment on a $1.5 billion Venezuelan bond that is in default, their lawyer said on Monday, kicking off a long-awaited showdown between creditors and the crisis-wracked OPEC nation. President Nicolas Maduro's government and state-owned companies owe nearly $8 billion in unpaid interest and principal following this year's default on bonds amid a hyperinflationary collapse of the country's once-wealthy socialist economy. 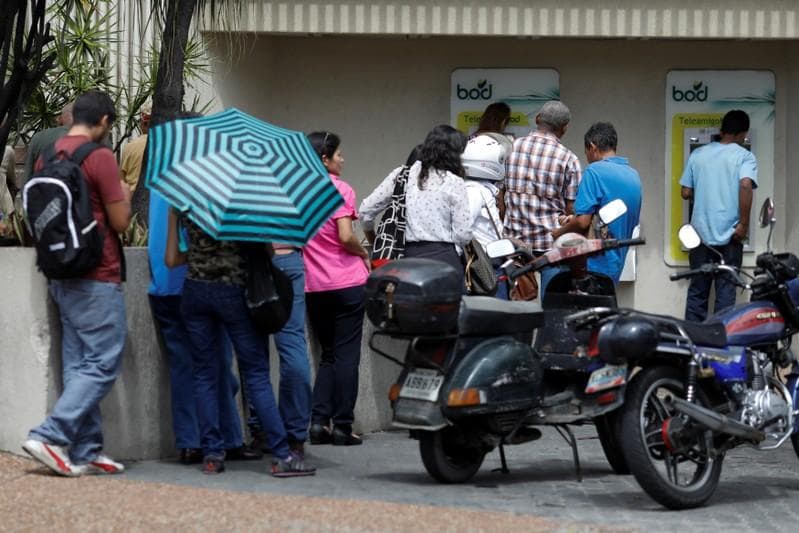 CARACAS (Reuters) - A group of creditors has demanded payment on a $1.5 billion Venezuelan bond that is in default, their lawyer said on Monday, kicking off a long-awaited showdown between creditors and the crisis-wracked OPEC nation.

The decision could trigger similar efforts by investors holding $60 billion in outstanding bonds issued by Venezuela and state oil company PDVSA [PDVSA.UL]. That could pave the way for a creditor dispute similar to the one that roiled Argentina for a decade.

"Unfortunately, the Republic has stopped paying on these bonds and is in default," Stancil wrote in an email. "My clients have therefore exercised their contractual rights to protect their interests - and those of their investors - in the face of the Republic's failure to meet its obligations."

The investors hold bonds with a face value of around $380 million, he said, without identifying the funds. Venezuela has failed to make about $140 million in interest payments on the bond, according to Refinitiv data.

Officials from Venezuela's Information Ministry, Finance Ministry and Central Bank did not respond to a request for comment.

The move, known as "acceleration," means the bond in question must be paid immediately, but in practice it is unlikely that Venezuela would do so and could require years of litigation before investors recoup their money.

The group has not yet taken their claim to courts in New York which govern the terms of the dispute related the bond in question, according to Stancil.

Bank of New York Mellon declined to comment and Syed did not respond to an email seeking comment.

Investors holding defaulted PDVSA and Venezuela bonds have until now taken few concrete steps in response to the default. Creditors do not believe Maduro is willing or capable of carrying out a restructuring process even though he has said he wants to do so.

The acceleration move coincides with a recent flurry of activity among other Venezuelan creditors, including one group which last week said it had hired law firm Cleary Gottlieb Steen & Hamilton LLP to advise on strategic alternatives.

Crystallex, a Canadian mining company that is seeking to collect $1.4 billion in compensation for the state takeover of its assets a decade ago, hired investment bank Moelis & Co to advise it on a possible sale of Citgo [PDVSAC.UL], PDVSA's U.S. refining subsidiary.

Venezuela and PDVSA bonds have for years provided juicy yields due to high oil prices, making them a mainstay of emerging market bond funds that wanted to outperform the market.

After most of them defaulted, the bonds now trade at a discount of more than 70 percent, while almost all of PDVSA's bonds are marked down by more than 80 percent.

Investors have noted that PDVSA has made interest payments on several bonds, including the 2020 issue that is backed by shares in Citgo.

Aid groups estimate that 1.6 million to 2 million Venezuelans will leave the country by the end of this year to escape hyperinflation and the extreme scarcity of food and medicine.