By Michael Martina and Chris Prentice BEIJING/WASHINGTON (Reuters) - The United States is pushing for regular reviews of China's progress on pledged trade reforms as a condition for a trade deal - and could again resort to tariffs if it deems Beijing has violated the agreement, according to sources briefed on negotiations to end the trade war between the two nations. A continuing threat of tariffs hanging over commerce between the world's two largest economies would mean a deal would not end the risk of investing in businesses or assets that have been impacted by the trade war. 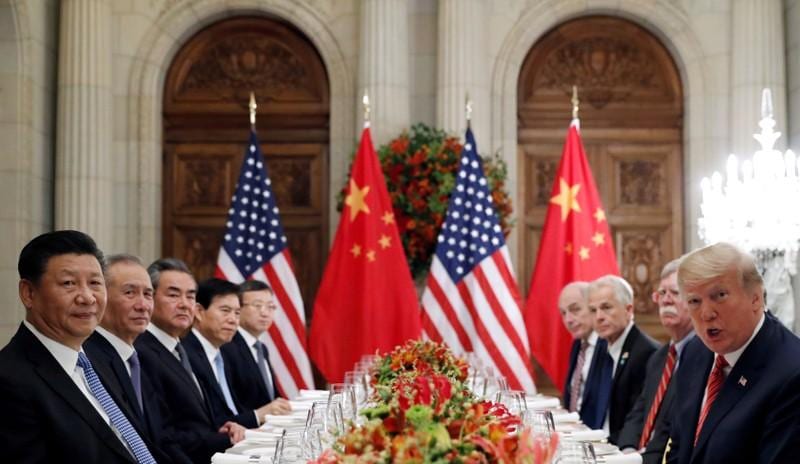 By Michael Martina and Chris Prentice

BEIJING/WASHINGTON (Reuters) - The United States is pushing for regular reviews of China's progress on pledged trade reforms as a condition for a trade deal - and could again resort to tariffs if it deems Beijing has violated the agreement, according to sources briefed on negotiations to end the trade war between the two nations.

A continuing threat of tariffs hanging over commerce between the world's two largest economies would mean a deal would not end the risk of investing in businesses or assets that have been impacted by the trade war.

"The threat of tariffs is not going away, even if there is a deal," said one of three sources briefed on the talks who spoke with Reuters on condition of anonymity.

Chinese negotiators were not keen on the idea of regular compliance checks, the source said, but the U.S. proposal "didn't derail negotiations."

A Chinese source said the United States wants “periodic assessments” but it's not yet clear how often.

“It looks like humiliation," the source said. "But perhaps the two sides could find a way to save face for the Chinese government."

The administration of U.S. President Donald Trump has imposed import tariffs on Chinese goods to put pressure on Beijing to meet a long list of demands that would rewrite the terms of trade between the two countries.

The demands include changes to China's policies on intellectual property protection, technology transfers, industrial subsidies and other trade barriers.

An enforcement and verification process is unusual for trade deals and is akin to the process around punitive economic sanctions such as those imposed on North Korea and Iran.

Disputes over trade are more typically dealt with through courts, the World Trade Organization (WTO) or through arbitration panels and other dispute settlement mechanisms built into trade agreements.

Trump's team has criticized the WTO for failing to hold China accountable for not executing on promised market reforms. The U.S. has also criticized the WTO's dispute settlement process and is seeking reforms at the organisation.

(For an explainer on how the U.S.-China talks differ from any other trade negotiation, see: )

Regular reviews would be one potential solution to address a demand from U.S. Trade Representative Robert Lighthizer for ongoing verification of any trade pact between the two countries, three sources familiar with the talks told Reuters. The threat of tariffs would be used to keep reform on track, the sources said.

Lighthizer is leading negotiations with China. A USTR spokesman declined to comment on the possibility of regular assessments.

The renewed focus on regular reviews in current negotiations - this time carrying the threat of tariffs - underscores the growing distrust between the two countries.

The extra scrutiny is needed and should be based on clear benchmarks - with consequence for failing to meet them, said Erin Ennis, Senior Vice President of the U.S.-China Business Council, a trade group representing American companies doing business in China.

“It needs to be tied to removing or reducing the tariffs," Ennis said. "If China can show compliance through a process like this, it would also be a trust-building measure for both sides.”

Trump's administration has accused China of repeatedly failing to follow through on previous pledges to implement reforms sought by the United States.

Washington often cites as an example the difficulties still faced by foreign payment card operators in entering China's market despite a 2012 WTO ruling that Beijing was discriminating against them.

A separate industry source said it is likely that different agreement on separate issues - forced technology transfer, intellectual property, changes to China's legal system - would require separate verification processes, all of which will need to be hammered out by negotiators.

"The challenge of verification and enforcement stems from the fact that China has made promises it hasn't kept," the source said.

Trump and Chinese President Xi Jinping agreed to a 90-day truce in the trade war in December to give their teams time to negotiate a deal. Nearly 50 days later, there is little sign that China will make the concessions the U.S. is seeking.

China's Vice Premier and lead negotiator Liu He is due to visit Washington for the next round of talks with Lighthizer and U.S. Treasury Secretary Steven Mnuchin at the end of the month.