By David Brunnstrom and Matt Spetalnick WASHINGTON (Reuters) - A meeting between U.S. President Donald Trump and Chinese President Xi Jinping to sign a long-awaited interim trade deal could be delayed until December as discussions continue over terms and venue, a senior official of the Trump administration told Reuters on Wednesday. 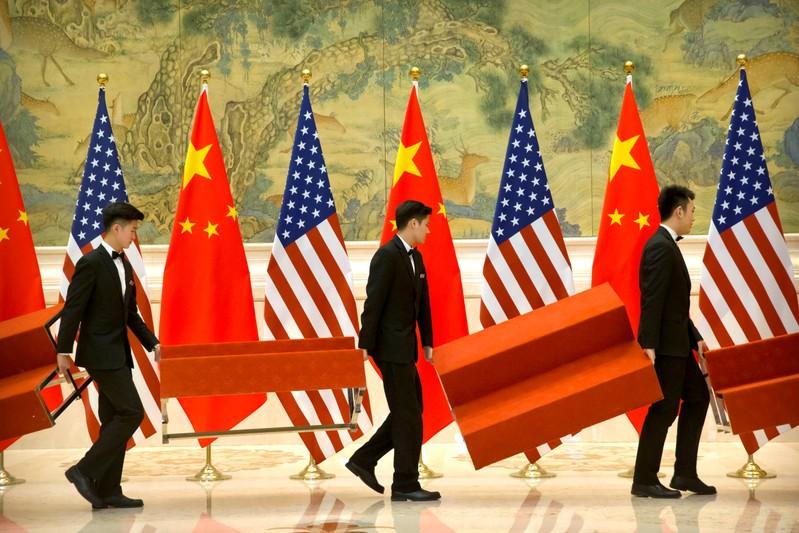 WASHINGTON (Reuters) - A meeting between U.S. President Donald Trump and Chinese President Xi Jinping to sign a long-awaited interim trade deal could be delayed until December as discussions continue over terms and venue, a senior official of the Trump administration told Reuters on Wednesday.

The official, who spoke on condition of anonymity, said it was still possible the "phase one" agreement aimed at ending a damaging trade war would not be reached, but a deal was more likely than not.

Dozens of venues have been suggested for the meeting, which had originally been scheduled to take place on the sidelines of a now-canceled mid-November summit of Asia-Pacific leaders in Chile, the official said.

One possible location is London, where the two leaders could meet after a NATO summit that Trump is due to attend from Dec. 3-4, the official said. "It's under consideration but nothing decided," the official said.

Other sites are possible in Europe and Asia, but the former is more likely, with Sweden and Switzerland among the possibilities. Iowa, which Trump has suggested, appeared to have been ruled out, the official said.

China's latest push for more tariff rollbacks would be discussed, but was not expected to derail progress toward an interim deal.

The official said China was believed to see a quick deal as its best chance for favorable terms, given pressure Trump is facing from a congressional impeachment inquiry as he seeks re-election in 2020.

U.S. Treasury prices gained on Wednesday on word that the talks could be delayed, while some investors also repositioned after a three-day sell-off. The dollar slid and the three-day global stock market rally paused as U.S. productivity data disappointed and investors turned a bit cautious about U.S.-China trade talks.

"Negotiations are continuing and progress is being made on the text of the phase one agreement," White House spokesman Judd Deere said. "We will let you know when we have an announcement on a signing location.”

China's embassy in Washington did not immediately respond to requests for comment.

An interim U.S.-China deal is widely expected to include a U.S. pledge to scrap tariffs scheduled for Dec. 15 on about $156 billion worth of Chinese imports, including cell phones, laptop computers and toys.

People familiar with the negotiations said on Monday that China has been pushing Trump to remove more tariffs imposed in September as part of the first phase of the deal. A U.S. official said the fate of the Dec. 15 tariffs is being considered as part of negotiations.

A source briefed on the talks told Reuters on Tuesday that Chinese negotiators want Washington to drop 15% tariffs on about $125 billion worth of Chinese goods that went into effect on Sept. 1. They are also seeking relief from earlier 25% tariffs on about $250 billion of imports from machinery and semiconductors to furniture.

A person familiar with China's negotiating position said it is continuing to press Washington to "remove all tariffs as soon as possible."

Since Trump took office in 2017, his administration has been pressing China to curb massive subsidies to state-owned firms and end the forced transfer of American technology to Chinese firms as a price of doing business in China.

Analysts say the phase one deal will fail to adequately address these issues, focusing largely on Chinese purchases of U.S. farm goods and intellectual property protections related to copyright and trademark issues. It will not address industrial subsidies at all.

Venues that have been talked about for the Trump-Xi meeting have ranged from Alaska to Greece.

One Chinese official said Beijing was floating the possibility of a meeting in Greece, where Xi is due to arrive this Sunday, after which he will head to Brazil for a summit of major emerging market countries which starts on Nov. 13.

Multiple U.S. sources have said a signing in Greece was unlikely.