By Christoph Steitz and Tom Käckenhoff ESSEN, Germany (Reuters) - Thyssenkrupp has begun due diligence with potential bidders for its plant division as the German conglomerate accelerates a radical overhaul to sell or turn around ailing business units in the next two years, a top executive told Reuters. 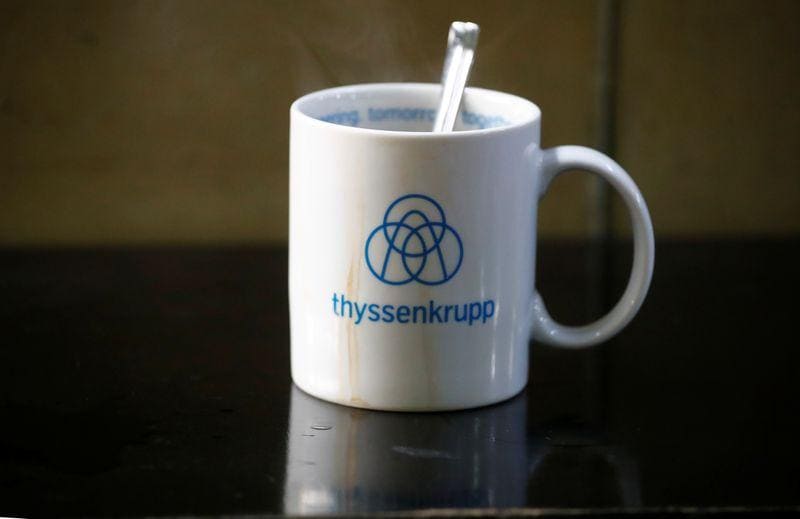 By Christoph Steitz and Tom Käckenhoff

ESSEN, Germany (Reuters) - Thyssenkrupp has begun due diligence with potential bidders for its plant division as the German conglomerate accelerates a radical overhaul to sell or turn around ailing business units in the next two years, a top executive told Reuters.

In his first interview, Volkmar Dinstuhl, who oversees the divestment of non-core assets, said the company has opened the books to buyers of its plant-building units and received expressions of interest for its stainless steel division.

Thyssenkrupp is also open to considering offers for its automotive and remaining industrial assets, said Dinstuhl, who heads up the group's Multi-Tracks division, which houses businesses Thyssenkrupp no longer wants to own.

"Our goal is to find a solution for all our businesses within the next two years," said Dinstuhl, the first time Thyssenkrupp has outlined a timeline for restructuring.

The Essen, Germany-based company, which makes submarines, warships, steel and car parts, as well as equipment for cement factories, construction and fertiliser plants, is struggling to define what its core business is.

Dinstuhl, an international chess master, is taking an opportunistic approach to reshaping the company's portfolio after selling the company's elevators unit for 17.2 billion euros ($20.2 bln) earlier this year.

That disposal gives Thyssenkrupp the financial strength to stem potential writedowns on other assets it has up for sale, allowing it to pursue a deeper restructuring than has previously been possible.

Dinstuhl said that Multi-Tracks, which accounts for about 6 billion euros in sales and was responsible for 400 million euros of negative cash flow in the 2018/19 fiscal year, will seek to sell, shut down or find partners for the 10 units it comprises.

Jennifer Cooper, who has held various M&A positions at Thyssenkrupp since 2001, will succeed Dinstuhl as the group's head of mergers and acquisitions, according to an internal memo seen by Reuters on Friday.

Thyssenkrupp is working with Citi to sell Plant Technology, which comprises more than half of Multi Tracks' 20,000 employees, and which is expected to draw final bids from a handful of suitors, sources said.

"We're keeping all options open, including a full sale or the divestment of parts," Dinstuhl said. Plant Technology covers the mining, cement and construction industries, and competes with Sweden's Sandvik and Denmark's FlSmidth.

Dinstuhl said the group has also received expressions of interest for its Italian stainless steel unit AST, a sales process run with the help of JP Morgan.

Dinstuhl said M&A activity was brisk, adding the first transactions were possible in the current fiscal year running until September.

Simultaneously, he is aiming for operational improvements at Multi-Tracks: "We see a stabilisation of the businesses and are optimistic that we've passed the trough," Dinstuhl said.