By John O'Donnell and Gederts Gelzis RIGA (Reuters) - Latvia is investigating whether its banks acted as conduits for Russian funds used to interfere in elections and politics elsewhere, after it received a warning from the United States, officials have told Reuters. 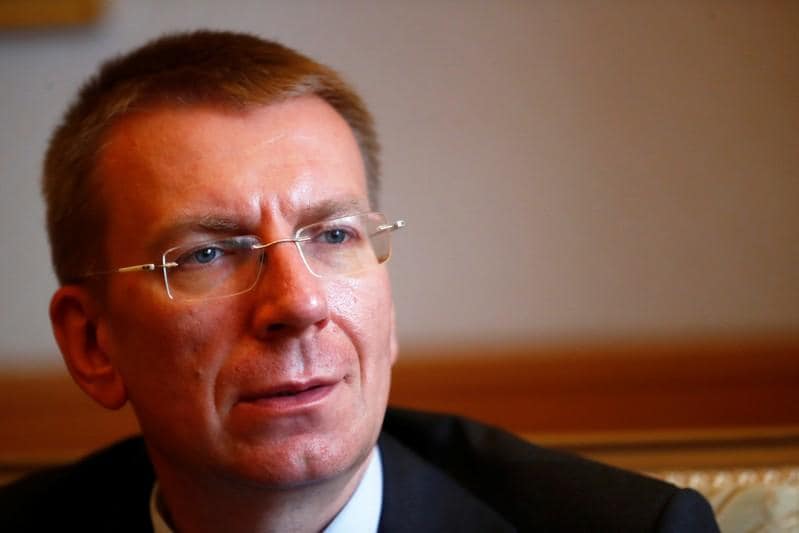 RIGA (Reuters) - Latvia is investigating whether its banks acted as conduits for Russian funds used to interfere in elections and politics elsewhere, after it received a warning from the United States, officials have told Reuters.

The allegations, which highlight the country's role as a stepping stone for Russian money on its way to the west, come after Latvia's third largest bank was shut in February after being accused by the United States of money laundering.

Foreign affairs minister Edgars Rinkevics told Reuters that citizens from Russia and former Soviet states, including people subject to U.S. sanctions, had put money in Latvian banks and some of it may have been used for political manipulation.

"There is also the connection to ... hybrid warfare that money being transferred or kept in (the) Latvian financial system can be used to undermine ... the political systems of other countries," Rinkevics said.

"Currently, our law enforcement authorities are investigating some leads that we have been provided that are related to hybrid warfare," he said, referring to campaigns to influence political developments.

Latvia's finance minister, Dana Reizniece-Ozola, confirmed that the government had launched such an investigation after receiving credible information from "our strategic partners", referring to the United States.

"This is the issue topical ... for the whole of Europe especially if it comes true that money has been used for manipulating election results in several European countries," Reizniece-Ozola told Reuters.

When asked about possible Russian-sponsored campaigns to influence politics, she said: "If our financial sector might be used for financial crime ... especially if it is used for political goals, that is a no go."

The ministers did not give details of which cases were being investigated but three senior Latvian officials said that one concerned the movement of funds from Russia through a Latvian bank to support an attempted coup in 2016 in Montenegro.

Late that year, as Montenegrins voted in an election, authorities arrested 20 people from neighbouring Serbia on charges of planning armed attacks against the state. Serbia later said it had uncovered evidence including 125,000 euros ($144,000) in cash and stashed uniforms.

Montenegro's Special Prosecutor later accused Moscow of involvement in the plot, which he said was aimed at halting the integration of the former Yugoslav republic into NATO. The Kremlin has dismissed such claims as absurd.

"The money which flowed through Latvia was possibly used to finance the coup in Montenegro," said one of the Latvian officials, who all asked not to be named, describing the ongoing investigation into the case.

Russia has also been accused of interfering in elections from Germany to the United States although Moscow denies any such action.

Reuters asked the Kremlin whether Russia had used Latvia to move funds that were used for political interference in Europe, whether it had been involved in an attempted coup in Montenegro and whether people from Russia now on the U.S. sanctions list had accounts with banks in Latvia.

A Kremlin spokesman, Dmitry Peskov, said, in a comment passed to Reuters by his office: "The answers to all the questions are no."

A spokesman for the government in Montenegro did not comment.

The latest warning from the United States that Latvian banks may have played a role in manipulation by Russia highlights the continued pressure from Washington on the Baltic state to tighten its controls.

The suspicion that large flows of Russian funds could also have been used for political interference has underlined the need to change the Swiss-style banking offered by about a dozen Latvian banks to Russians and citizens of former Soviet states.

Foreign minister Rinkevics said the country's change of tack with regards to this business was also due to more aggressive Russian foreign policy, such as in Ukraine.

"There has been quite ... a change in Russia's behaviour," he said. "There is connection between money laundering and the possibility of use of the black money also to influence ... the political system of our allies."

"There was this concept that Latvia can be the bridge between the west and the east," he said. "We need ... to say goodbye to the whole bridge concept."

Since securing independence from Russia in 1991, more than a dozen Latvian banks have promoted themselves as a gateway to Western markets for clients in Russia and former Soviet states such as Ukraine - and promised Swiss-style secrecy for clients.

At the peak in 2015, Latvian banks held deposits of about 12 billion euros ($15 billion) for foreign customers. Bankers and officials have said much of the money came from Russia.

Changing its approach to banking presents Latvia with a difficult balancing act. Washington is an important military ally for the former Soviet-ruled state of 2 million people on the EU's eastern flank. It also has close historical and trade ties with Russia.