By Luc Cohen and Roslan Khasawneh NEW YORK/SINGAPORE (Reuters) - A shipping joint venture between Venezuela and China has fallen apart in the wake of U.S. sanctions, resulting in the South American nation losing three supertankers at a time when foreign shippers are reluctant to carry its oil, court documents show 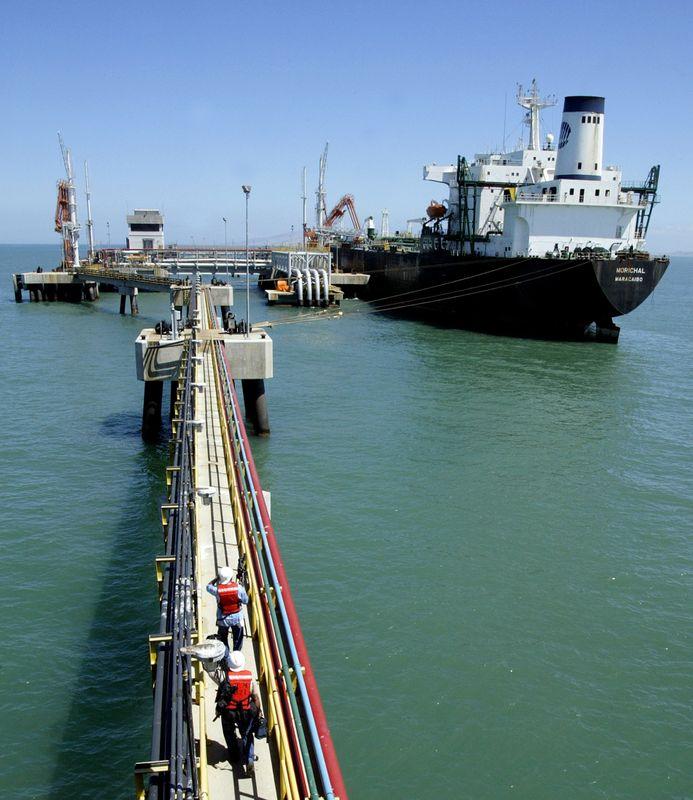 By Luc Cohen and Roslan Khasawneh

NEW YORK/SINGAPORE (Reuters) - A shipping joint venture between Venezuela and China has fallen apart in the wake of U.S. sanctions, resulting in the South American nation losing three supertankers at a time when foreign shippers are reluctant to carry its oil, court documents show.

PetroChina Co Ltd, which had been state-run Petroleos de Venezuela's partner in the Singapore-based joint venture CV Shipping Pte Ltd, took control of the three tankers between January and February, according the documents from a Singapore court reviewed by Reuters.

The transfer of the Junin, Boyaca and Carabobo very large crude carriers (VLCC) has not been previously reported.

It came after U.S. sanctions on PDVSA left the vessels without insurance, leading to millions of dollars in losses for CV Shipping and prompting PetroChina to place it in bankruptcy. The original purpose of the venture was to ship Venezuelan oil to China and some other export destinations.

PDVSA's loss of the three tankers, which carry each up to 2 million barrels of oil, comes as it is more dependent than ever on its in-house fleet. Washington is intensifying its 18-month campaign to oust Venezuelan President Nicolas Maduro by sanctioning third-party vessels that transport the OPEC nation's oil.

That has prompted major Greek shipping firms, some of whose vessels have been sanctioned for transporting Venezuelan crude, to stop working with PDVSA, prompting Venezuelan oil exports to collapse.

PDVSA has until now managed to retain a fourth VLCC from the venture, the Ayacucho.

But a U.S. glass manufacturer seeking to collect a $500 million arbitral award for Venezuela's 2010 expropriation of two factories is suing in Singapore court to seize that tanker, Reuters reported last week.

The dispute marks an unceremonious end to the once-ambitious venture launched in 2008 as oil-hungry China sought to deepen ties with Venezuela under former President Hugo Chavez, Maduro's predecessor and mentor. China has since drastically scaled back support, contributing to Venezuela's collapse under Maduro.

"The fundamental purpose of this JV has already irretrievably broken down," Xia Hongwei, a PetroChina executive, wrote in a Sept. 17, 2019 letter to PDVSA executives included in the court filings.

Neither PetroChina nor PDVSA responded to requests for comment for this story.

Petrochina moved to place CV Shipping into court-administered liquidation in Singapore in January 2020, around a year after Washington first sanctioned PDVSA to try to cut off oil revenue to Maduro, who remains in power.

China remains one of the main importers of Venezuelan crude, mostly by way of ship-to-ship transfers that make it appear as if the origin of the crude is Malaysia.

The sanctions set off a series of cascading crises at the venture. Bermuda-based insurer Standard Club revoked protection and indemnity (P&I) insurance for all four vessels in May last year, letters included in the court records show.

CV Shipping's insurance broker, Willis Towers Watson, explained in an email included in the case file that Standard Club made that decision because "it did not want to be exposed to the risk of being or becoming subject to sanctions."

Singapore law requires vessels to have P&I insurance to set sail, so that move rendered the tankers effectively unable to navigate, according to an affidavit written by a PetroChina lawyer.

In addition, CV Shipping's banks froze the company's accounts, and the vessels' shipmanagers warned they would soon cancel their contracts, the affidavit read.

CV Shipping, which posted annual profits ranging from $600,000-$14 million from operating the vessels between 2013 and 2018, quickly found itself losing $500,000 per month since it had to pay for management fees and fuel, even though the ships could not earn revenue by transporting oil, the affidavit showed.

To stem losses, PetroChina in June 2019 proposed ending the CV Shipping venture and splitting the four vessels between the two firms. PDVSA had taken over management of the Ayacucho in June 2019 while it was in Venezuelan waters, according to a notice to its previous manager included in the docket.

Xia described this move as "unilateral" in a June 28 email to PDVSA executives, but nonetheless proposed the company keep the vessel and the Carabobo, leaving the Junin and the Boyaca to PetroChina.

Shares in the Ayacucho and Junin were transferred to PDVSA and PetroChina, respectively, on Jan. 17, 2020.

PDVSA paid $17.8 million for shares in the Ayacucho while PetroChina paid $13.8 million for the Junin shares, according to a sale and purchase agreement included in the court docket. The payment was deducted from loans the shareholders had made to the venture.

But the two parties were unable to reach a deal for the remaining two vessels, prompting PetroChina to request CVS be placed in liquidation, a move swiftly authorized by Singapore courts. The appointed liquidator proposed an auction of the remaining two tankers between the two companies, and asked both parties to provide proof of funds, which PDVSA said it could not do because of the sanctions.

"Due to force majeure, expressed in the unilateral coercive measures imposed by the Government of the United States of America on our behalf, which is public and recognized, we are not able to indicate a bank account," Oswaldo Vargas - who ran PDVSA's maritime subsidiary, PDV Marina - wrote the liquidator on Feb. 22.

The U.S. Treasury Department, which enforces sanctions, did not respond to a request for comment. Vargas was removed from the company and arrested by Venezuelan authorities on allegations of complicity with fuel smuggling in March.

The liquidator, acting on CV Shipping's behalf, subsequently reached a deal in a private negotiation with PetroChina to sell the shares in the Carabobo and Boyaca, for 1 Singapore dollar ($0.7287) each, after PetroChina agreed to pay off the inter-company debt the two vessels' parent companies owed to CV Shipping for around $53 million total.

Petrochina made the payments on Feb. 26.