By Naveen Thukral and Hallie Gu SINGAPORE/BEIJING (Reuters) - China's government is discussing permits for millions of tonnes of additional corn imports over the next year, three industry sources told Reuters, amid a surge in animal feed demand and after storms and drought damage tightened domestic supplies. A round of new import orders from China would make it the world's top importer of corn for the first time and likely drive up global prices of corn and other grains. That would amplify food inflation caused by disruptions to global supply chains due to the coronavirus pandemic. 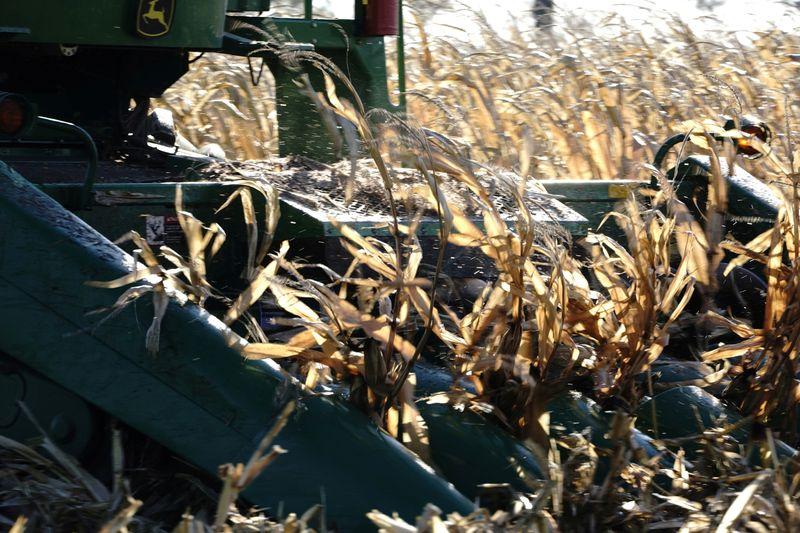 By Naveen Thukral and Hallie Gu

SINGAPORE/BEIJING (Reuters) - China's government is discussing permits for millions of tonnes of additional corn imports over the next year, three industry sources told Reuters, amid a surge in animal feed demand and after storms and drought damage tightened domestic supplies.

A round of new import orders from China would make it the world's top importer of corn for the first time and likely drive up global prices of corn and other grains. That would amplify food inflation caused by disruptions to global supply chains due to the coronavirus

Food security has emerged as a global theme during the pandemic, exacerbated in China by a disease that has devastated the hog herd over the past two years and left pork supply tight. China is the world's largest pork consumer and second-largest corn consumer.

Beijing previously held massive reserves but has almost emptied them at auctions, leading to grain buyers buying alternatives such as rice and wheat, as well as boosting corn imports. Domestic corn prices hit record highs this month on shortages after a typhoon, a drought and a pest hit crops.

Two China-based sources and a Singapore-based trader with knowledge of import discussions said Beijing was considering issuing more lower-tariff quotas for buyers to ease the domestic shortage. These quotas encourage imports by exempting shipments from most of the 65% tariffs that would otherwise be levied by Chinese customs.

"(The government) will review the market supply-demand situation, and might issue more quotas later that could go into the state reserves," said one of the sources familiar with the government plan.

The people with knowledge of the deals declined to be identified because they are not authorised to speak to media.

China's emergence as the top importer as it moves away from a long-standing policy to encourage domestic self-sufficiency in corn will change global grain trade and encourage corn growers worldwide to plant more to meet Chinese demand.

After China began importing soy - another crop used for animal feed - in the 1990s it rapidly became the top buyer. Farmers in Argentina, Brazil and the United States responded by switching to soy crops.

"China over the next decade may change the landscape of the world corn balance sheet by becoming a major import player," said Terry Reilly, senior analyst at Chicago brokerage Futures International.

Beijing routinely issues 7.2 million tonnes in annual low-tariff quotas for corn imports, and meets most of its 280 million tonnes of annual demand through domestic crops. China has never before used its full annual quota.

Analysts have estimated it may need more than four times that quota, or 30 million tonnes, in the 2020-2021 October to September crop year.

The U.S. Department of Agriculture attache in Beijing said in a report issued earlier this month there was talk in China that state-owned companies were drafting a report to the NDRC recommending allocating an additional 20 million tonnes in lower-tariff quotas.

Even before further additional quotas are awarded, Chinese importers have ordered more than double the annual allowance. They have booked around 12 million tonnes of corn imports from the United States and around 5 million tonnes from elsewhere including Ukraine for the crop year, according to a Singapore-based international trading source and two other people with knowledge of the deals.

That would put China just behind Mexico, the world's largest importer. Mexico is forecast to import 18.3 million tonnes, according to United States Department of Agriculture estimates.

Beijing has already authorised a 5 million tonne special low-tariff quota to top grains trader COFCO, which was mainly used to book U.S. supplies, according to one of the sources familiar with the details of the trades.

Under the terms of that extra allowance, COFCO would import the corn at the lower tariff rate, but its profits will be capped at 30 yuan ($4.49) per tonne and any additional windfall will go to the state, the person said.

"I think this is done out of considerations from two perspectives," the person said. "One is we do need corn. Secondly, we have this deal with the United States that we need to fulfil."

China committed to buying billions of dollars of additional agricultural imports from the United States under the terms of a deal signed in January to end a trade war between the two countries.

It is well short of the target, but has increased imports this year as it seeks to address shortages of corn, pork and soy.