By Eric M. Johnson SEATTLE (Reuters) - Boeing Co has told suppliers it will resume production of its best-selling 737 jets at a rate of 52 aircraft per month in February 2020, then stepping up to a record 57 jets monthly in June, three people familiar with the matter told Reuters 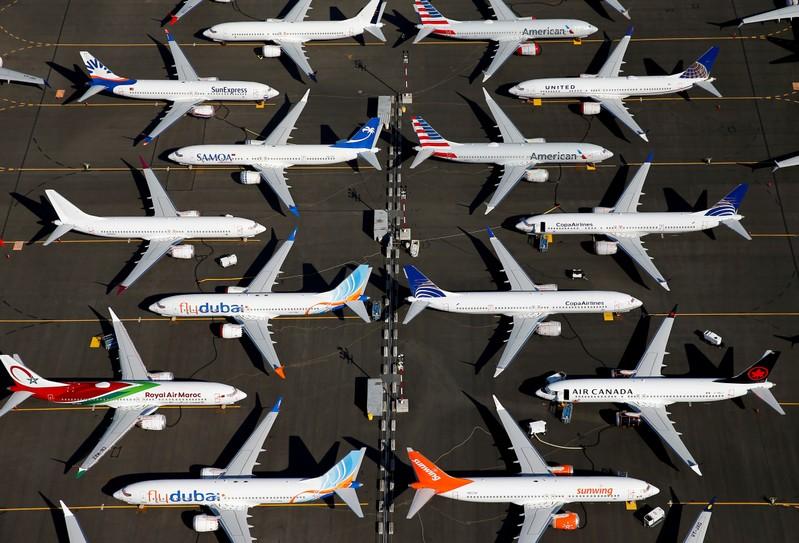 SEATTLE (Reuters) - Boeing Co has told suppliers it will resume production of its best-selling 737 jets at a rate of 52 aircraft per month in February 2020, then stepping up to a record 57 jets monthly in June, three people familiar with the matter told Reuters.

Boeing told more than 100 suppliers during at least one Web meeting July 30 that the new schedule depended upon regulators approving the 737 MAX to fly again commercially in the fourth quarter, one of the people said.

Boeing mainly builds the latest version of its cash-cow single-aisle family at its Seattle-area factory, but also builds a small number of earlier or military variants of the 737.

One of the people expressed skepticism over the timing given the intense scrutiny from regulators that grounded the 737 MAX after deadly crashes killed nearly 350 people in Ethiopia and Indonesia in the span of five months.

There is no guarantee when regulators will clear the 737 MAX to fly again, and Boeing Chief Executive Dennis Muilenburg told analysts last month that Boeing would consider further 737 output cuts or potentially suspending production if the grounding dragged on.

In April, Boeing cut the number of 737s it produces monthly to 42 from 52 after halting deliveries to airline customers, cutting off a key source of cash and hitting margins.

Because the grounding happened when Boeing was going up towards record production levels, and each move of the sprawling supply chain has to be planned far in advance, Boeing and its suppliers are now caught between two conflicting pressures: preparing to get back on the upward path as soon as the plane is flying but also ratcheting downwards if regulators stall and the grounding continues for longer than expected.

Boeing has been tight-lipped about its production plans.

Muilenburg told analysts last month that Boeing expects to be able to maintain its current monthly production rate of 42 aircraft, "followed by incremental rate increases that would bring our production rate to 57 during 2020."

Two persons familiar with Boeing's production plans, who spoke to Reuters on condition of anonymity, said Boeing told suppliers it will increase production from 42 to 47 single-aisle aircraft per month in October, jibing with its guidance to investors on when it expects to win regulatory approval. It would then increase from 47 aircraft to the pre-crash rate of 52 aircraft per month in February 2020, the people, and a third person familiar with the plans, said.

Boeing then would hit a record stride of 57 single-aisle jets per month in June 2020, two of the people said.

"While the assumption reflects Boeing's best estimate at this time, the actual timing of return to service will be determined by the FAA and other global aviation regulatory authorities and could differ from this assumption and estimate."

The current production plan represents a new delay as Boeing wrestles with the logistics of aligning a sprawling global supply chain with its high-volume assembly line in Renton, Washington.

Rate changes by major manufacturers are usually incremental and communicated months or even years in advance, but the unprecedented challenge to the 737 program has forced Boeing to scramble, one of the people said. Boeing is eager to increase production because the higher rate means it can deliver more planes and get more cash. A higher rate also means Boeing pays less for parts.

Boeing organized at least one Web meeting on July 30 to inform suppliers that the original rate ramp plan - which Boeing decided in April would begin in August - was being delayed by three months, according to electronic materials described to Reuters by a person who attended. Different suppliers were shipping at different "rate profiles" and Boeing wanted to try to "harmonize the supply chain," the person added.