By Gabriela Baczynska and John Chalmers BRUSSELS (Reuters) - The European Union's Brexit negotiator told the bloc's 27 national envoys to Brussels that he still thinks a trade deal with Britain is possible despite a new crisis in the tortuous four-year saga, diplomatic sources told Reuters. Britain left the EU last January and is in a standstill transition until the end of the year. Talks on a new trade deal from 2021 have made little progress ahead of an EU deadline of end-October, while London's moves to undermine its earlier divorce deal have further clouded the picture 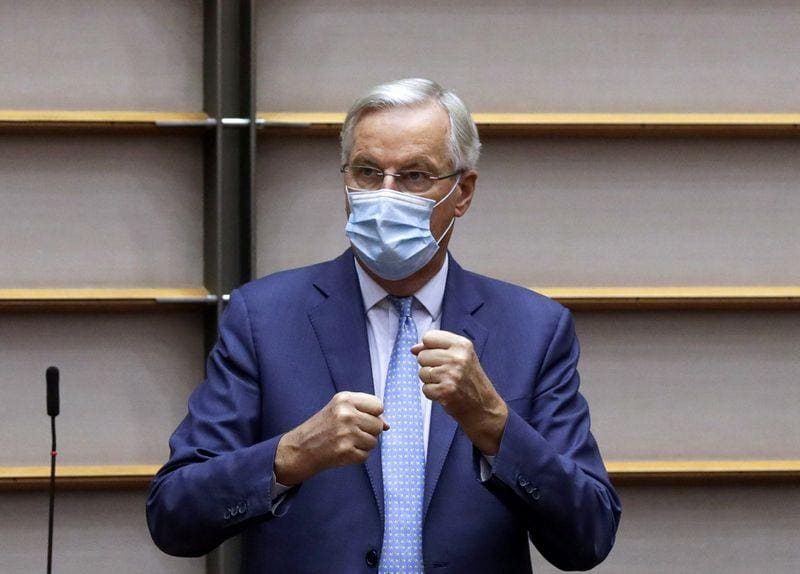 BRUSSELS (Reuters) - The European Union's Brexit negotiator told the bloc's 27 national envoys to Brussels that he still thinks a trade deal with Britain is possible despite a new crisis in the tortuous four-year saga, diplomatic sources told Reuters.

Britain left the EU last January and is in a standstill transition until the end of the year.

Talks on a new trade deal from 2021 have made little progress ahead of an EU deadline of end-October, while London's moves to undermine its earlier divorce deal have further clouded the picture.

But the assessment from Michel Barnier, who addressed the ambassadorial gathering on Wednesday, was not all bleak, according to EU sources who either participated or were briefed.

"Barnier still believes a deal is possible though the next days are key," said one of the EU sources.

"The hope is still there," added another.

The first source said tentative concessions offered by the United Kingdom on fisheries - a major point of discord so far - were "a glimmer of hope".

Reuters reported exclusively on Tuesday that Britain has moved to break the deadlock despite publicly threatening to walk away from the Withdrawal Agreement.

Talks on new trade arrangements descended into fresh turmoil this month over Prime Minister Boris Johnson's plans to pass new domestic laws that would undercut the withdrawal accord.

EU diplomats said they would assess the domestic political situation in Britain at the end of the month before the bloc's 27 national leaders decide next steps at an Oct. 15-16 summit.

'TOO LITTLE BUT NOT TOO LATE'

A third source, a senior EU diplomat, confirmed the UK offer on fisheries but said it was not going far enough.

"It is too little but it's not too late," the diplomat said, stressing that London's offer for fishing concessions in the English Channel was largely irrelevant for EU fishermen who mostly trawl the North and Irish seas.

The diplomatic sources stressed the EU would go on negotiating with Britain, if only to avoid being blamed for jeopardising an estimated $1 trillion in annual trade.

"There is unease about what Britain is doing but Barnier has stressed he will keep negotiating until his last breath," said a fourth EU diplomat.

The person agreed with an estimate by Societe Generale bank, which put at 80% the probability of a damaging no-deal split.

EU states agreed in discussion with Barnier the bloc would not conclude any new trade deal with the UK should it end up approving the Internal Market Bill without amendments ensuring it does not violate Britain's international legal obligations.

The bloc would also take a more rigid line in demanding a solid dispute settlement mechanism in any new UK trade deal should Johnson press ahead with his current plans on the law, according to the sources.

"Most see it (the introduction of the Internal Market Bill) as a ploy to gain a negotiating advantage rather than an effort to sink the Withdrawal Agreement," said a fifth diplomat who also took part in the meeting with Barnier.

A sixth person, also present on Wednesday, said the bloc would sue Britain at the top EU court if it passes the law as proposed.

Barnier was further sounding out his UK counterpart, David Frost, in a meeting in Brussels on Thursday on whether the tentative offer on fisheries meant London was still open to sealing a deal, the EU sources said.

A UK government spokesperson said Britain would work hard to bridge outstanding gaps to get a deal in a month following Thursday's "useful" discussions with Barnier.

"These covered a broad range of issues and some limited progress was made, but significant gaps remain in key areas, including fisheries and (state aid) subsidies," they said.