By Danilo Masoni and Julien Ponthus MILAN (Reuters) - European shares remained stuck in a 'Santa Crash' on Tuesday in a fourth straight session of losses, dragged down by poor economic data and lower oil prices. The pan-European STOXX 600 index ended the day down 0.6 percent, just a few points away from two-year lows hit last week on slowing economic growth worries 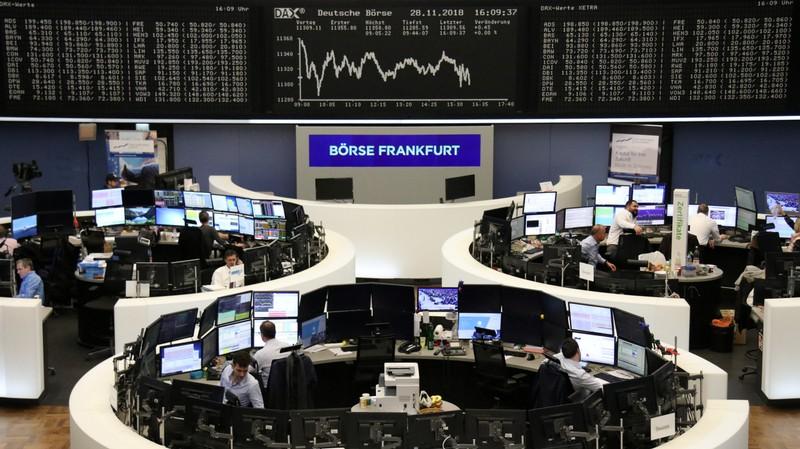 By Danilo Masoni and Julien Ponthus

MILAN (Reuters) - European shares remained stuck in a "Santa Crash" on Tuesday in a fourth straight session of losses, dragged down by poor economic data and lower oil prices.

A vast majority of European bourses and sectors traded in the red and didn't recover when the S&P 500 and the Nasdaq opened higher after the previous session's slump.

"We are stuck in our European doldrums", said Oddo Securities trader Mikael Jacob, noting no spillover effect from investors' new-found optimism that the Federal Reserve might adopt a dovish tone at its meeting on Wednesday.

The STOXX 600 is down more than 12 percent so far this year, hit by a slowing economy and political instability in Europe.

Deutsche Telekom rose at the open after its unit T-Mobile and Sprint won backing from two U.S. national security reviews for their $26 billion merger. The go-ahead came after indications that both groups had offered to stop using Huawei equipment.

Shares in the German phone group pared gains to fall 0.5 percent at the close.

Among the few gainers was Getlink, up 5.5 percent after French builder Eiffage bought a five percent stake in the company, which operates the Channel Tunnel between France and Britain.

Cherry shot up 18.8 percent after a consortium led by British private equity firm Bridgepoint made a $1 billion cash takeover offer for the Swedish gaming firm.