By Jan Strupczewski BRUSSELS (Reuters) - The euro zone is likely to decide between March and May when and how governments would start tapering support to their economies as vaccination campaigns allow the lifting of pandemic lockdowns and economic activity picks up, top euro zone officials said on Monday. 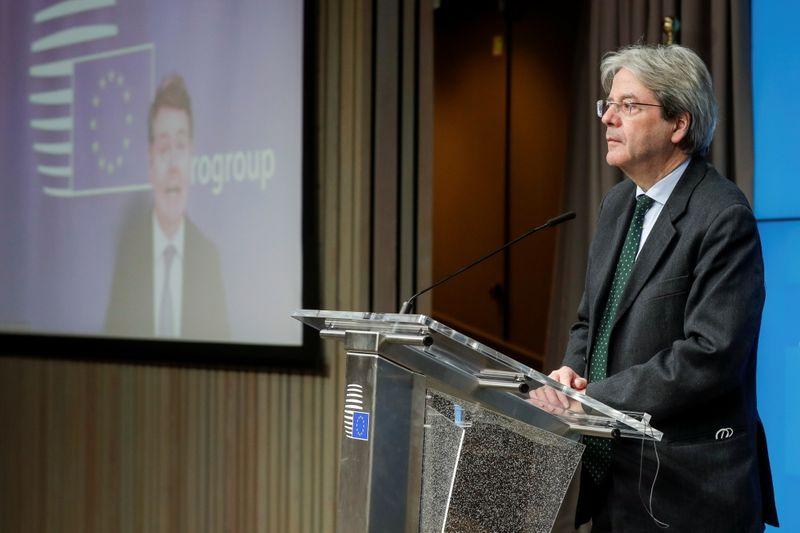 BRUSSELS (Reuters) - The euro zone is likely to decide between March and May when and how governments would start tapering support to their economies as vaccination campaigns allow the lifting of pandemic lockdowns and economic activity picks up, top euro zone officials said on Monday.

Finance ministers of the 19 countries sharing the euro discussed the European Commission's forecasts showing the euro zone would rebound less than expected this year, and they decided to keep all measures intact for now.

"This reaffirms the need ... for supportive economic policies to remain in place for as long as they are needed," the ministers' chairman, Paschal Donohoe, told a news conference, noting the large uncertainty surrounding the recovery.

"There is an inherent risk of withdrawing support too early as opposed to withdrawing it too late," he said.

Euro zone governments have made available trillions of euros to economies since the start of the pandemic in February 2020 in fiscal stimulus and various measures to support corporate liquidity, loan repayment, tax deferrals and salary subsides.

To make cash available, the 27-nation bloc last year suspended its budget rules that limit government borrowing until the end of 2021.

But as the economy gradually regains its footing, the blanket support measures would need to become more targeted and calibrated to help only viable firms, rather keep alive those that would have collapsed even without the COVID-19 crisis.

Euro ministers will discuss how to manage the transition of support for companies in more detail in April.

The European Commission and governments will also have to decide in coming months if they want the EU borrowing limits, suspended until the end of 2021, restored in 2022, or to keep the suspension, called the general escape clause, one more year.

"In early March the Commission will provide guidance on how it intends to approach this year’s Spring economic policy package," European Economics Commissioner Paolo Gentiloni told the news conference.

"This will include preliminary fiscal guidance for the period ahead and the parameters that we will look at to decide on the General Escape Clause," he said.

After the Commission's next round of economic forecasts in early May, euro zone ministers will consider when to restore any borrowing limits.

"The Eurogroup will aim to exchange views on policy intentions against the background of the Commission's Spring forecasts. These discussions could have a clearer focus on 2022 and include a further reflection on medium-term fiscal rebalancing strategies," a Eurogroup work schedule showed.

Deciding which companies are fit to survive and which ones should be allowed to fail will be a tough task, probably best accomplished with the help of private investors, who have better tools to determine that than governments, officials said.

A key element to manage the expected bankruptcies will be more harmonised euro zone insolvency laws that ministers will discuss in April. Such harmonisation would also help bring closer what the EU calls a capital markets union - making it easier for companies to raise funds via securities issued across the bloc, rather than rely mainly on bank loans in their home country as now.

Such capital markets union, combined with an EU-wide bank deposit guarantee system that would complete the bloc's banking union, would raise the role of the euro internationally, giving euro zone countries some of the privileges now enjoyed only by the U.S. dollar, officials believe.