By Jan Strupczewski and Francesco Guarascio BRUSSELS (Reuters) - The EU executive warned Italy's incoming government on Wednesday it should go on cutting the country's heavy public debt, as EU officials pointed to market pressure as a more effective form of euro zone discipline than finger-wagging from Brussels. 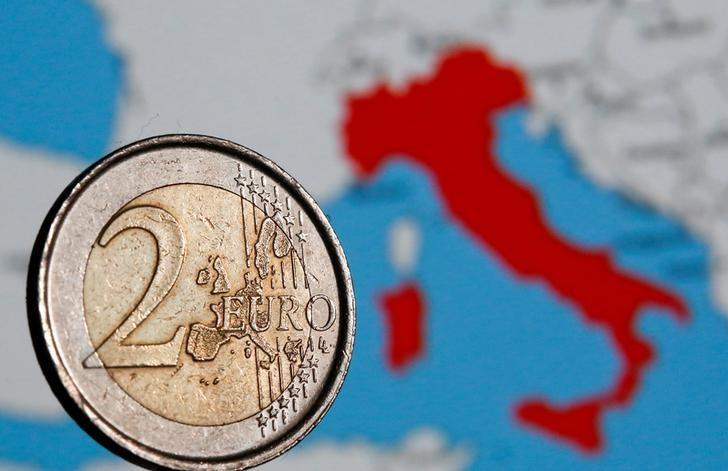 By Jan Strupczewski and Francesco Guarascio

BRUSSELS (Reuters) - The EU executive warned Italy's incoming government on Wednesday it should go on cutting the country's heavy public debt, as EU officials pointed to market pressure as a more effective form of euro zone discipline than finger-wagging from Brussels.

In publishing annual recommendations for economic policy in the bloc's 28 member states, the European Commission did not refer to the appointment of a new coalition in Rome that is sceptical of euro zone strictures. EU officials were at pains not to appear to be publicly interfering in Italian politics.

But the executive sounded its clearest warning yet that any risk of financial instability in the euro zone's third-biggest economy could spill across the single currency area, which is still licking wounds inflicted by sovereign debt crises in several other much smaller countries, notably Greece.

"Given its systemic importance, Italy is a source of potentially significant spillovers to the rest of the euro area," the Commission said in its report, which also highlighted risks for the Italian economy from backsliding on efforts to cut state pension costs and an end to the bloc's easy money policies.

The report rammed home existing concerns about the state of Italy's economy, although senior Commission officials told reporters they had no plan to institute penalty procedures over its high public sector debts.

Valdis Dombrovskis, the Commission's vice president for the euro, said the country had to continue reducing its debt and recommended a cut in the structural budget deficit next year of 0.6 percentage points -- an austerity plan unlikely to find favour with the parties trying to form a government this week.

The League and the 5-Star movement, whose nominee for prime minister Giuseppe Conte was given a mandate to form a government by the head of state late on Wednesday, both performed well in an election in March on promises to spend more and tax less.

Economics Commissioner Pierre Moscovici said that it was important that Italy, an EU founder member and the most indebted euro zone state bar Greece, have a credible debt policy.

Speaking privately, senior EU officials suggested that the reality of having to raise funding in the markets could temper the spending and tax-cutting ambitions of the new ruling parties -- rather as Greece's leftist government found in 2015.

"Reality is something else from posturing in a campaign," one said. Others acknowledged that Brussels' tools for enforcing deficit and debt regulations on member states were limited, and that the rule that investors needed a return for risk might prove tougher.

Markets have already started to bite.

Italy's 10-year bond yield hit a 14-month high on Wednesday, widening the gap over German yields by 18 basis points at one stage. Yet yields remain far below the peak reached in 2011 when Silvio Berlusconi's centre-right government quit amid fears of default.

Markus Ferber, a German conservative member of the European Parliament whose views generally reflect hawkish sentiment in Berlin over the financial problems of Mediterranean euro zone states, said the Commission must challenge a League/5-Star government head on and not let it breach the bloc's fiscal rules.

The League and 5-Star were planning "an open attack on ... the EU system of economic governance", he said. "The Commission must find a credible answer for once. Laissez-faire and business as usual will just not do the trick any more."