By Alissa de Carbonnel STRASBOURG (Reuters) - The European Commission rejected Italy's draft 2019 budget on Tuesday, saying it brazenly broke EU rules on public spending, and asked Rome to submit a new one within three weeks or face disciplinary action. Italian bond yields jumped on the unprecedented move by the EU executive which was exerting for the first time a power obtained during the 2013 sovereign debt crisis, to send back a budget of a euro zone country that violates the rules. 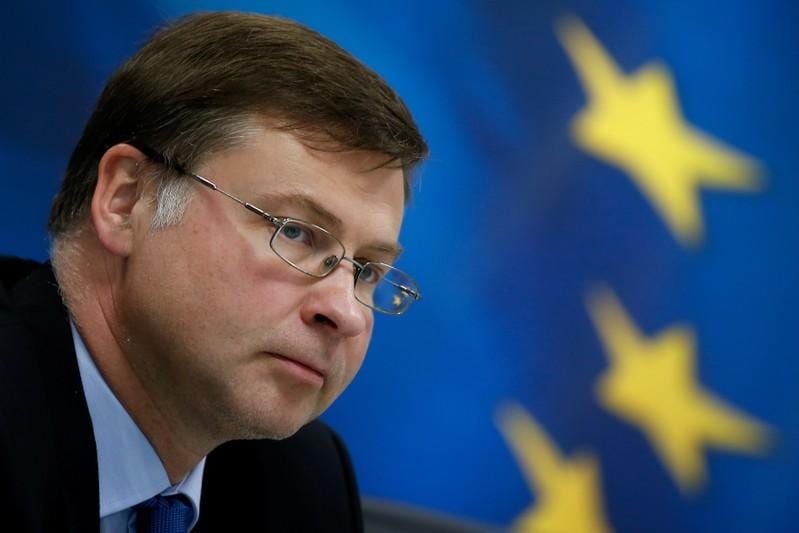 Italian bond yields jumped on the unprecedented move by the EU executive which was exerting for the first time a power obtained during the 2013 sovereign debt crisis, to send back a budget of a euro zone country that violates the rules.

Having recently emerged from the Greek debt debacle that nearly destroyed the single currency, the EU is concerned about another possible crisis if debt-laden Italy were to lose market trust.

The Commission has previously dealt with France, Spain, Portugal and previous Italian administrations that broke EU fiscal rules, but none of those violations were as blatant as the latest Italian budget draft, the Commission said.

"Today, for the first time, the Commission is obliged to request a euro area country to revise its draft budget plan," Commission Vice President Valdis Dombrovskis told a news conference.

"The Italian Government is openly and consciously going against the commitments it made."

Yields of Italian benchmark 10-year bonds surged on the news to 3.57 percent in the afternoon from 3.42 early on Tuesday.

Rome will now have to send a new draft budget that would cut the structural deficit, which excludes one-offs and business cycle swings, by 0.6 percent of GDP, rather than increase it by 0.8 points as in the current plan, the Commission said.

In a letter to the Commission on Monday, Italy acknowledged that the draft violated EU rules, but said it would stick to it. Deputy Prime Minister Luigi Di Maio responded to the Commission rejection by calling for "respect" for Italians.

Deputy Prime Minister Matteo Salvini said the government was convinced it was "in the right".

A spokeswoman for the economy ministry in Rome defended the expansionary budget and said Italy stuck by its position that the only way to cut public debt was by boosting economic growth.

"Experience has shown time and again that higher fiscal deficits and debt do not bring lasting growth. And excessive debt makes your economy more vulnerable to future crisis," Dombrovskis said.

Unless Rome changes the deficit assumptions, the Commission said it would start disciplinary steps, called the excessive deficit procedure.

Under EU law, Italy should cut its public debt every year by 1/20 of the difference between 60 percent of GDP and its current size, counted on average over three years -- in Italy's case meaning several percent of GDP a year.

The excessive deficit procedure can lead to fines of up to 0.2 percent of GDP if recommendations to cut the deficit and debt are ignored.