By Gabriela Baczynska and Philip Blenkinsop SOFIA/BRUSSELS (Reuters) - European leaders sought unity on Wednesday toward threatened U.S. import tariffs on steel and aluminium, balancing the views of those most fearful of a trade war and those determined not to be bullied into concessions. U.S 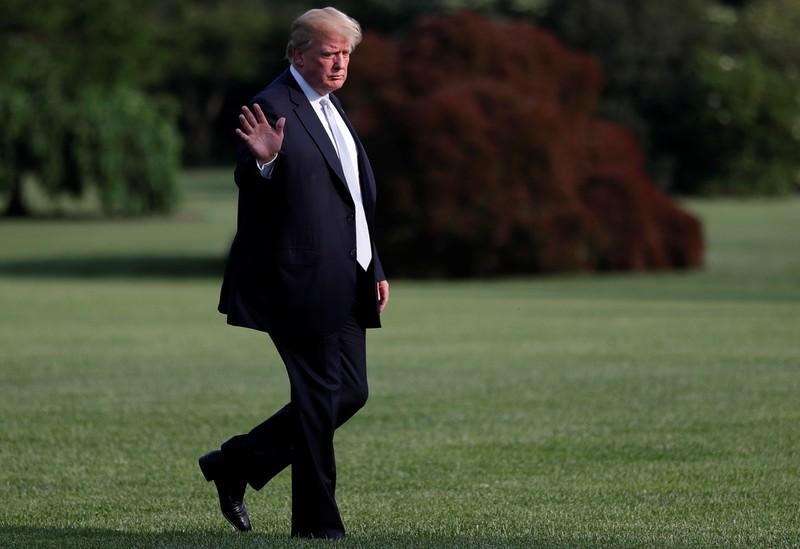 By Gabriela Baczynska and Philip Blenkinsop

SOFIA/BRUSSELS (Reuters) - European leaders sought unity on Wednesday toward threatened U.S. import tariffs on steel and aluminium, balancing the views of those most fearful of a trade war and those determined not to be bullied into concessions.

U.S. President Donald Trump has imposed import duties of 25 percent on steel and 10 percent on aluminium on grounds of national security, but granted EU producers a temporary exemption until June 1 pending the outcome of talks.

French President Emmanuel Macron and other EU leaders, who meet for a summit in Bulgaria from Wednesday, have said the bloc will not negotiate with a gun held to its head. Donald Tusk, who chairs the summits, said on Wednesday EU unity was key.

"Here again, unity is our greatest strength and my objective is simple - we stick to our guns," Tusk told a news conference. "This means a permanent exemption from U.S. tariffs on aluminium and steel if we are to discuss possible trade liberalisation with the U.S."

"The EU and U.S. are friends and partners. Therefore U.S. tariffs cannot be justified on the basis of national security. It is absurd to even think that the EU could be a threat to the United States."

In bitter comments, Tusk said Trump has rid Europe of "all illusions" with the trade dispute and by pulling out of an international nuclear deal with Iran.

"Looking at the latest decisions of President Trump someone could even think: with friends like that who needs enemies. But frankly speaking, Europe should be grateful to President Trump. Because thanks to him we have got rid of all illusions. He has made us realise that if you need a helping hand, you will find one at the end of your arm," Tusk said.

EU diplomats say the need to find a unified stance goes beyond just tariffs. The United States has withdrawn from the Iran nuclear deal, posing a threat to European companies doing business there, and has blocked appointments to the World Trade Organization, undermining its ability to settle trade disputes.

The debate will continue among trade ministers on May 22 with Germany urging its EU partners to show more flexibility in the run-up to the June 1 deadline. Germany is Europe's biggest exporter to the United States with more than 1 million jobs at stake.

An EU source said after the dinner the 28 EU leaders agreed that, in exchange for permanent exemptions, they could discuss with Washington deeper LNG cooperation, a WTO reform and better access to each other's markets for cars and public procurement.

"These talks will be based on the principles of reciprocity and WTO compatibility and with the objective of avoiding a trade war," the source said.

Another one quipped that the EU wanted to "make trade - not trade wars" with Trump.

German Economy Minister Peter Altmaier, a former head of Chancellor Angela Merkel's cabinet, has acknowledged that finding a common stance with France and formulating an offer to the United States were "equally difficult".

The European Commission, which oversees trade policy for the 28 EU members, has insisted that the EU be granted a permanent exemption without conditions.

It has also said it would respond to tariffs with its own duties on U.S. products, including motor bikes and whisky. It is expected to notify the WTO of its potential plans this week.

The Commission has mooted the idea of negotiating an agreement with the United States to lower import duties, but only once the permanent exemption is granted.

The idea would be to dust off bits of the planned Transatlantic Trade and Investment Partnership (TTIP), on which negotiations were frozen after Trump came into office.

Such an agreement would be far simpler, limited largely to tariff reduction, and would not be known as "TTIP", a red rag to anti-globalisation protesters.

The EU view is that the first step would be an assessment of what both parties wish to negotiate, and then it would need EU members to approve a mandate. Negotiations proper could be years away.

Altmaier said the Europeans should discuss this regardless of any exemption.

A further issue is that the United States has agreed permanent exemptions with countries such as Brazil and South Korea, but only by imposing import quotas instead of tariffs.

U.S. Commerce Secretary Wilbur Ross, who talked with EU Trade Commissioner Cecilia Malmstrom again on Tuesday, has been on the phone to EU capitals telling them to accept export restraints, according to EU diplomats.

However, trade specialists in Brussels say that quotas on industrial goods are not allowed under WTO rules and that, in any case, the EU demand is that no measures be imposed. ($1 = 0.8444 euros)