By Jan Strupczewski HELSINKI (Reuters) - European Union finance ministers backed on Saturday a simplification of the EU's fiscal rules to make them more transparent and predictable, but more work is needed before any changes are agreed, a senior European Commission official said. Commission vice president for the euro Valdis Dombrovskis said after a meeting of the ministers that they broadly accepted an idea put forward by the independent European Fiscal Board (EFB) to focus the rules on debt and government spending. 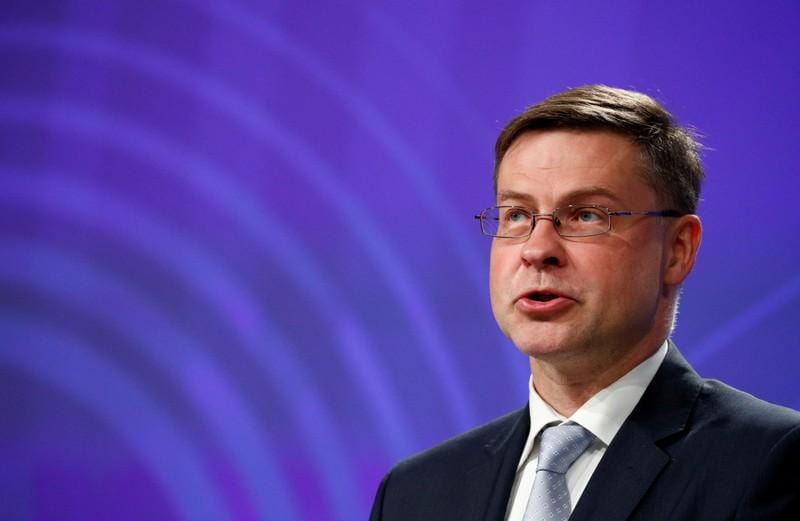 HELSINKI (Reuters) - European Union finance ministers backed on Saturday a simplification of the EU's fiscal rules to make them more transparent and predictable, but more work is needed before any changes are agreed, a senior European Commission official said.

Commission vice president for the euro Valdis Dombrovskis said after a meeting of the ministers that they broadly accepted an idea put forward by the independent European Fiscal Board (EFB) to focus the rules on debt and government spending.

"It is certainly an option to explore and there was relatively good acceptance of this option," Dombrovskis told a news conference after informal talks in Helsinki.

"Many member states spoke in favour of simplifying the rules to increase transparency and predictability," he said.

Focusing on public debt and government spending would put the spotlight on easily observable parameters over which finance ministers have control. The focus of the rules now is on the structural deficit - an artificially calculated parameter that is often revised and over which ministers have no influence.

Dombrovskis said the Commission, the guardian of EU laws, would have to approach a revision of EU rules cautiously to avoid a situation where laws are opened for review, but cannot be closed again for lack of agreement on their new shape.

"We need further analysis and discussion ... which the Commission has to deliver by year-end," he said, referring to a review the Commission is obliged to periodically produce.

Originally designed in 1997, the EU rules, called the Stability and Growth Pact, put limits on borrowing in the economic union of countries that share the euro currency, but left members sovereign over government debt and deficits.

After modifications in 2005, 2011 and 2013, the rules have become so complex that the Commission each year publishes an almost 100-page handbook to explain how they work, along with many exemptions and exceptions.

The two key elements of the rules are a limit on the nominal budget deficit of 3% of GDP and a ceiling on public debt of 60%.

But changing the rules will take a long time.

"It is important to be prudent about the review of the stability pact because it is a complex, delicate and long process," Italian Finance Minister Roberto Gualtieri said. "From talks today it has, however, emerged that governments agree that the process of reviewing fiscal rules should proceed," he said.

Italy got into trouble with the Commission last year because its debt, which at 133% of GDP is the second highest in the EU, has been rising instead of falling as required by EU laws.

Under the EFB proposal countries that have debt above 60% would have to keep net government primary spending, which is expenditure less interest payments on public debt, at or below the rate of the economy's potential GDP growth, which is the rate of growth that does not trigger higher inflation.

To avoid reliance on fluctuating annual data, the ceiling for net expenditure growth would be set for three years, after which it would be recalculated.

Finally, the ceiling could be abandoned via a general escape clause triggered by independent fiscal institutions and a more autonomous European Commission economic department.

The existing rules cap the headline budget deficit at 3% of GDP and oblige governments every year to cut their structural deficit, the budget gap excluding one-off revenues and spending and the effects of the business cycle, until balance or surplus.

For countries with debt above 60% of GDP, the existing rules set a path for debt reduction that is 1/20 of the excess above 60% every year, measured as an average over three years.

They also employ the expenditure benchmark that limits government spending at or below the rate of potential growth.

The EFB also proposed that instead of sanctions for not meeting EU fiscal rules - a measure that has so far never been applied to any country despite ample grounds - it would be better to use an incentive.

Countries that play by the new rules would as a reward get access to the euro zone's about-to-be-created budget that would finance investment and perhaps later also perform a stabilising function during economic downturns.