By Jan Strupczewski WASHINGTON (Reuters) - European Union budget rules that underpin the euro must be made simpler and focussed on cutting debt because negative yields will not last forever, the EU's Economic Commissioner Pierre Moscovici in charge of enforcing the rules said on Thursday. 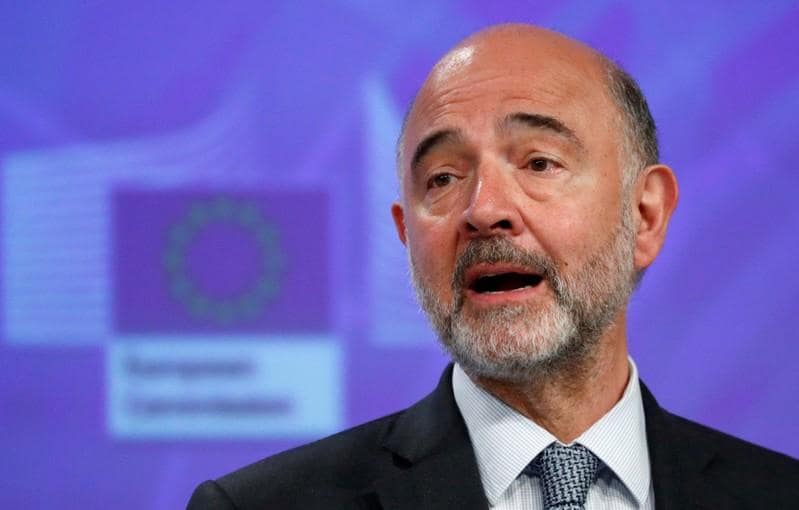 WASHINGTON (Reuters) - European Union budget rules that underpin the euro must be made simpler and focussed on cutting debt because negative yields will not last forever, the EU's Economic Commissioner Pierre Moscovici in charge of enforcing the rules said on Thursday.

"We should find a robust and simple way to cut public debt, today our rules are too complex," Moscovici told Reuters in an interview on the sidelines of the International Monetary Fund meetings in Washington.

Originally designed in 1997, the rules, called the Stability and Growth Pact, put limits on borrowing in the economic union of countries that share the euro currency but left members sovereign over government debt and deficits.

After modifications in 2005, 2011 and 2013, the rules have become so complex that the European Commission each year publishes an almost 100-page handbook to explain how they work, along with many exemptions and exceptions.

The two key elements of the rules are a limit on the nominal budget deficit of 3% of GDP and a ceiling on public debt of 60%.

While no euro zone countries have deficits above the limit, many exceed the debt criterion, mainly as a legacy of high borrowing during the sovereign debt crisis.

Except Germany, which is determined to cut its debt below the 60% ceiling, many high-debt countries are slow to cut borrowing, taking advantage of the negative yields on bonds which are a result of the European Central Bank's bond buying scheme.

GOOD TIMES FOR BORROWING WILL END

But Moscovici warned borrowing would not always be so cheap.

"We are now in a very privileged situation with negative interest rates, but that might not last forever and problems will come back," he said.

Moscovici, who will end his term along with the whole European Commission at the end of the month, said the current rules put too much emphasis on calculated indicators like the output gap, that often underwent major revisions.

"We should find a direct link between public expenditures and reducing public debt in a simpler way," he said.

Moscovici has come under fire from many euro zone finance ministers over the last five years for being too lenient in the application of the rules to countries like Italy, Portugal, Spain and his own country France.

The ministers argued that his reluctance to fine repeated offenders of EU borrowing limits had reduced the credibility of the rules and the justifications given by the Commission were not transparent.

But Moscovici rejected such criticism, saying his approach worked better because deficits in the euro zone fell sharply.

"I am proud of what we have done, which is clearly different to what was done before," he said.

"Until this Commission, the rules were used strictly and rigidly. We immediately thought that flexibility and dialogue would be preferable to rigidity and sanctions," he said.

"If I look at the results, we have succeeded in reducing the deficits in the EU, which are 0.8% of GDP (on average), whilst sustaining growth without austerity or punishment for any country," he said.

Moscovici said he was sure his successor in the job would continue that approach. "That has to be pursued. I am very confident that Paolo Gentiloni, my successor, will go in the same direction," he said.