By Ali Kucukgocmen and Tuvan Gumrukcu ISTANBUL (Reuters) - Turkey announced its biggest natural gas discovery on Friday, a 320 billion cubic metre (11.3 trillion cubic feet) Black Sea field which President Tayyip Erdogan said was part of even bigger reserves and could come onstream as soon as 2023. If the gas can be commercially extracted, the discovery could transform Turkey's dependence on Russia, Iran and Azerbaijan for energy imports. 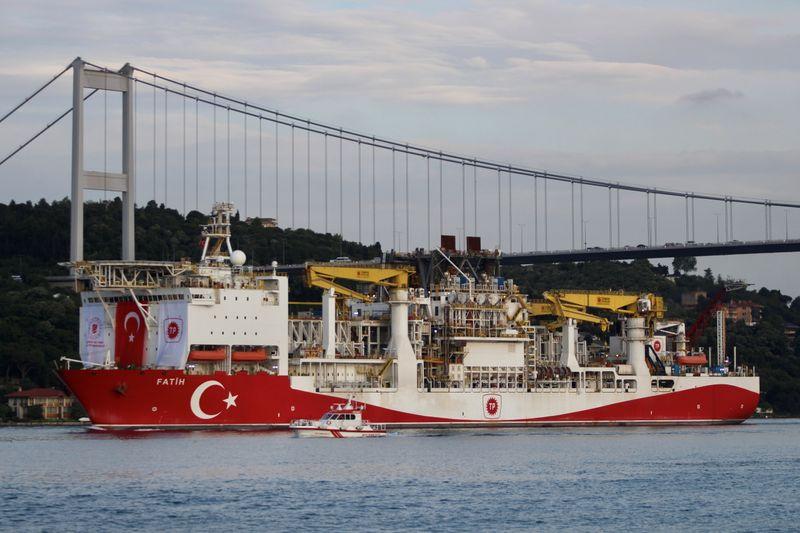 By Ali Kucukgocmen and Tuvan Gumrukcu

If the gas can be commercially extracted, the discovery could transform Turkey's dependence on Russia, Iran and Azerbaijan for energy imports. Erdogan said his country was determined ultimately to become a net energy exporter.

"Turkey has realised the biggest natural gas find of its history in the Black Sea," he said in a widely anticipated televised address from an Ottoman palace in Istanbul, linked by video to a drill ship in the western Black Sea.

The ship made the discovery about 100 nautical miles north of the Turkish coast.

"This reserve is actually part of a much bigger source. God willing, much more will come," Erdogan said. "There will be no stopping until we become a net exporter in energy."

Analysts said it was not clear whether the 320 billion cubic metres he announced referred to total gas estimates or amounts that could be extracted, but that either way it represented a major discovery.

"This is Turkey’s biggest-ever find by a wide margin, and one of the largest global discoveries of 2020," said Thomas Purdie of consultancy Wood Mackenzie.

Any reduction in Turkey's energy import bill, which stood at $41 billion last year, would boost government finances and help ease a chronic current account deficit which has helped drive the lira to record lows against the dollar.

"We will remove the current account deficit from the agenda of our country," Finance Minister Berat Albayrak said, speaking from the deck of the Fatih drill ship.

Many officials and analysts have cautioned that it could take up to a decade for gas from the Black Sea find to come online, and would need billions of dollars of investment to build up the infrastructure for production and supply.

But Sohbet Karbuz, director of hydrocarbons at the Paris-based Mediterranean Observatory for Energy, said Turkey may move ahead swiftly with investment decisions.

"The process will move very quickly, in terms of financing, time and procedures. Help will probably be needed from foreign companies from a technical and technological perspective but I see 2023 as a reasonable target," Karbuz said.

The gas find is located in waters 2,100 metres deep, Energy Minister Fatih Donmez said, with drilling extending another 1,400 metres below the sea bed. "We will go down a further 1,000 metres ... and data shows we will probably reach gas there too."

In a later interview with broadcaster TRT Haber, Donmez said the operation of the gas in the field will be handled by state owned companies.

As well as the Black Sea, Turkey has been exploring for hydrocarbons in the Mediterranean, where its survey operations in disputed waters have drawn protests from Greece and Cyprus. Greek and Turkish warships shadowing a Turkish survey vessel collided there last week.

Erdogan said operations in the Mediterranean would accelerate.