Electrified by Tesla, Chinese startups are on the charge

By Norihiko Shirouzu BEIJING (Reuters) - China's electric vehicle startups are on the charge again, thanks to Tesla. The country's growing fascination with the U.S. 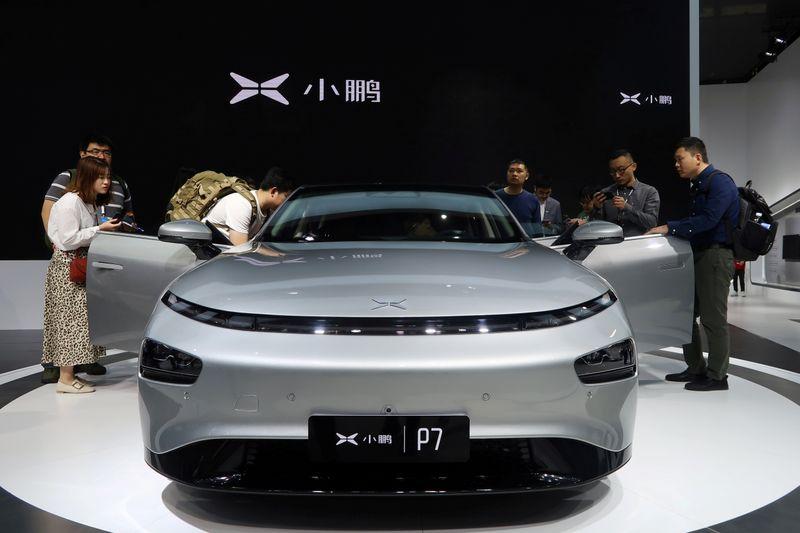 BEIJING (Reuters) - China's electric vehicle startups are on the charge again, thanks to Tesla.

The country's growing fascination with the U.S. pioneer's sleek designs and cutting-edge technology is giving a string of second-wave home-grown Tesla

Speaking ahead of the Beijing auto show which starts on Saturday, Fu said the relative success of U.S. initial public offerings (IPO) by XPeng and Li Auto had helped fuel the company's ambitions to list.

Since it was founded in 2017 in Shanghai, Aiways has raised "no more than 10 billion yuan" and it will need to secure more funding from some private equity funds and other investors, said Fu, the former head of Volvo Cars China who has also been an executive at Mercedes-Benz, Skoda and FAW-Volkswagen.

"IPO is also in our plans, and we're planning to push ahead with it," Fu said, adding that Aiways would most likely be listed within China, declining to elaborate further.

China has been the world's fastest-growing EV market for years helped by generous state purchase subsidies but the sales boom started to sputter last year as Beijing began cutting back financial support and watering down other pro-EV policies.

Some prominent Chinese EV startups such as Byton and Singulato have struggled and NIO's future looked in doubt last year. But a surge in Tesla's market value - and its sales in China - suggest the country's EV dream is far from over.

"As Tesla stock goes, so goes the fate for electric vehicle startups," said China auto expert Mike Dunne. "Funds are flowing like a river in spring again. Tesla could end up pulling everyone into the future sooner than expected."

'JUST OUT OF THE GATE'

Tesla's sales in China in the first eight months of 2020 have nearly tripled from a year ago to 73,658 cars, according to consulting firm LMC Automotive, despite the disruption caused by the COVID-19 pandemic.

Some Chinese auto executives say cars made by the company from Palo Alto, California are achieving the status of Apple's

Fu believes the revived interest in EVs in China is partly because EV owners are fascinated by intelligent driving functions, as well as the interactive, so-called connected services that many newer models are starting to come with.

"Today's smart, connected cars aren't that smart. We're just out of the gate and are in a stage that could be described as iPhone 1 or the original iPhone," Aiways President Fu said. "As that gets developed step-by-step, in the near future we will get to iPhone 8, iPhone 9 and iPhone 10."

Dunne, too, said Tesla was the primary factor sustaining interest in EVs among consumers and investors in China, and elsewhere in the world. Tesla's shares have surged 10-fold over the past 12 months and it became the world's most valuable car company in July.

And cheaper running costs are also a significant factor.

Cui Yihua, who sells aquariums in the eastern city of Suzhou, Jiangsu province, switched from his gas-guzzling Audi Q7 to save cash and chose an electric-blue Aiways U5 sports-utility vehicle (SUV) after also test-driving a Tesla Model 3, saying he liked the U5's interior design, its colour and extra space.

"I have charging facilities in my housing compound, in the parking garage downstairs. I put a 100-yuan deposit down for charging and I've been using it for two weeks," he said. "It's negligible compared to gasoline-fueled cars."

Automakers in China that were part of the initial wave of EV startups sold or leased many of their cars to drivers working for ride-hailing firm Didi Chuxing and rival taxi services who were spurred on by rebates and other policy support for EVs.

That's most evident in the performance of Tesla's Model 3 sedan, which is perceived by many consumers as fairly affordable at about 270,000 yuan ($39,750) after purchase subsidies.

To be sure, some companies hit hard by the initial slowdown in EV sales are still in limbo. Byton has suspended its business for six months through January and is working on a restructuring of its operations, a spokeswoman said.

Singulato, meanwhile, is operating on a limited capacity and is looking for further funding to finish developing two cars and launch them, a senior company source told Reuters.

But executives say raising funds has become markedly easier this year, and their confidence levels are climbing too.

NIO, for example, has raised $3.8 billion this year to get back on track, mostly through state-affiliated funds in the eastern Chinese province of Anhui, and also with commercial paper and additional shares, its spokesman said.

While sales of what China defines as new energy vehicles (NEV) - all-electric cars, plug-in electric hybrids and hydrogen fuel-cell vehicles - started to contract more than a year ago, they jumped 26% in August after a 19.3% rise in July, which ended 12 months of year-on-year declines.

Fu said sales of the Aiways U5, its first model, have gained momentum since April to surpass 1,400 in the three months through August, when it also unveiled its sportier SUV U6 ion.

Within a year, he thinks Aiways could reach sales of 10,000 cars in China, with another 3,000 from Europe, where it has started selling in Germany. It plans to expend into Belgium, Denmark, France, the Netherlands, Norway and Switzerland.

"We think we have decisively overcome the difficulties of last year," Chief Executive Li, who says he still flies economy to save the company money, told Reuters.

"Demand is really strong. If you place an order with us right now you will need to wait for a really long time to pick up your new car," Li said. "Our main challenge in the fourth quarter is to improve our production capability."