Why Subbarao was right not to cut rates

What an extraordinarily unpredictable man Reserve Bank of India (RBI)governor D Subbarao is. Despite loud roars from investors in recent weeks for action from the RBI in the form of another interest rate cut to revive a slowing economy, Subbarao held firm and kept the key policy rate - the repo rate - and the cash reserve ratio (CRR) unchanged. He almost never does what economists and markets expect him to do.

Good for him. Most economists had predicted that either/both the repo rate and CRR would be cut byat least 25 basis pointsin the central's bank mid-quarterly monetary review on Monday. (100 basis points = 1 percentage point.)

On Saturday, even finance minister Pranab Mukherjeeadded his weight behind those expectations, saying he hoped the RBI would "adjust" monetary policy to ease concerns of slow growth and high inflation. (As usual, he had nothing to say on 'adjusting' policy by the government to boost the economy. That's always someone else's job, it seems.) 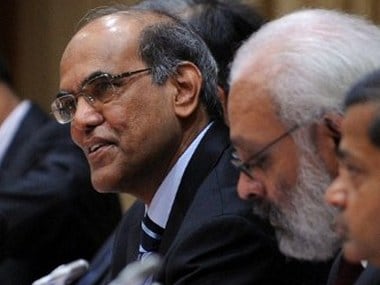 Only the RBI governor could have shrugged off such blatant pressure. AFP

Only the RBI governor could have shrugged off such blatant pressure. Thank goodness for that.

In the policy document, the central bank made it amply clear that it had front-loaded rate cuts by cutting the repo rate - the rate at which the central bank lends to commercial banks for the short term - by a steeper than expected 50 basis points in April and that it was now up to the government to do its part in boosting the economy.

"The Reserve Bank had frontloaded the policy rate reduction in April with a cut of 50 basis points," it said. "The decision was based on the premise that the process of fiscal consolidation critical for inflation management would get underway, along with other supply side initiative."

It also highlighted the fact that several other factors apart from interest rates are causing a slowdown in economic activity and investments. "Consequently, further reduction in the policy rate at this juncture, rather than supporting growth, could exacerbate inflationary pressures," it noted.

Subbarao certainly got that right. India is increasingly moving towards stagflation - stagnating growth and persistent inflation. While GDP growth slowed to a nine-year low of 5.3 percent for the quarter ending March, wholesale inflation remains stubbornly above 7 percent. Consumer inflation, on the other hand, has already crossed into double digits: in May, it came in at 10.36 percent. Cutting interest rates right in such an environment, while popular, would have been the wrong thing to do.

The policy document makes it clear that the RBI has done all it can on interest rates for now, and that it remains watchful of further threats to inflation. The document alsohighlighted some key risks that the RBI said it was taking noteof while keeping rates steady:

One, the risk of commodity prices, especially oil, soaring again, remains high. While commodity prices have been cooling recently, risk aversion has heightened, the document said. If there is an 'event shock' (a financially catastrophic event like the Lehman Brothers collapse in 2008), central banks around the world could unleash another round of monetary easing, which would then again push up commodity prices - and inflation.

Translation:no point in the RBI adding fuel to the inflation fire by cutting rates now. Besides, it's best to keep its monetaryammunition intactuntil later when things could get far worse.

Two, the policy document also noted that real effective bank lending interest rates, though positive, remain comparatively lower than the levels seen during the high growth phase of 2003-08. The real rate is the difference between the nominal rate and inflation. "This suggests that factors other than interest rates are contributing more significantly to the growth slowdown," the RBI noted.

Translation: Interest rates are not the only factor to blame for the slowdown in growth. If investments are not happening even at lower real rates, the problem lies elsewhere (policy hurdles and regulatory bottlenecks)

Three, supply bottlenecks continue to pile pressure on inflation in the economy. "Notwithstanding the moderation in core inflation, the persistence of overall inflation both at the wholesale and retail levels, in the face of significant growth slowdown, points to serious supply bottlenecks and sticky inflation expectations," the documentsaid.

Yet the government has failed so far to move on addressing these supply constraints. Indeed, a long-awaited hike in diesel prices has also been delayed due to political pressures. "The consequent subsidy burden on the Government is crowding out public investment at a time when reviving investment, both public and private, is a critical imperative. The widening current account deficit (CAD), despite the slowdown in growth, is symptomatic of demand-supply imbalances and a pointer to the urgent need to resolve the supply bottlenecks."

Translation: Monetary policy cannot cure supply bottlenecks - and no one should expect it to.

All in all, this policy document seems to bring the focus back on inflation as it notedthat "future actions will depend on a continuing assessment of external and domestic developments that contribute to lowering inflation risks."

Given that a poor monsoon will likely add to inflationary pressures in the months ahead, Subbarao is right not to have cut interest rates right now, never mind disappointed markets.Hopefully, this will put pressure on the government to take some action finally.