The finance minister may have to slice at least Rs 20000 crore from government spending to prevent a budget blow-out, which could threaten to send the country's credit rating into "junk" status, two ministry officials said.

P. Chidambaram will make a final decision on whether to go ahead with the cuts at the end of October, when he gets an update on revenue collections, the officials, who have direct knowledge of the process, said.

If he goes ahead with cuts, the minister would likely focus on areas of discretionary spending but keep programmes, such as food subsidies, in place as state and national elections near, these officials said.

Chidambaram, who last year oversaw cuts worth over Rs 1 lakh crore, is aiming to prevent the budget for the fiscal year to March 2014 from stretching beyond a deficit target of 4.8 percent of GDP. 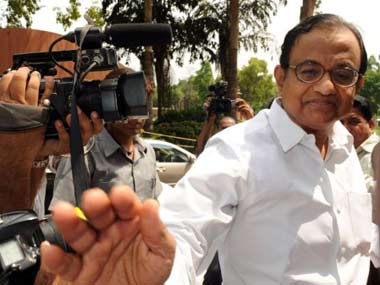 Chidambaram will make a final decision on whether to go ahead with the cuts at the end of October, when he gets an update on revenue collection. Reuters

A budget blow-out would be a concern for credit ratings agencies. India has the lowest investment grade rating and Standard & Poor's maintains a negative outlook. A cut to "junk" status would raise its borrowing costs and could trigger further panic on financial markets after the rupee fell as much as 20 percent this year and the economy posted its weakest growth in years.

The officials said that Chidambaram had briefed federal officials on September 17 on the need for prudent spending, even though in public he has said that the budget remains on target.

"With oil subsidies up by about Rs 30000 crore, the government may have to cut expenditure by around Rs 20000 crore in addition to usual savings of around Rs 30000 crore at the end of the year," said a senior finance ministry official.

However, a spokesman for the ministry said there were no plans for cuts at present and that "departments have been instructed to manage within the allocated funds".

Fearing defeat in state elections likely due in November and in national polls due by May next year, India's government has balked at cutting its hefty oil subsidy bill and recently introduced a costly food subsidy scheme targetted at the rural poor who are the ruling Congress party's core voters.

Last month, it deferred a plan to raise diesel prices by close to 10 percent in one go that could have sharply cut the oil subsidy burden, estimated at over 900 billion rupees for the current fiscal year - nearly 40 percent more than budgeted.

The government also introduced subsidised grain to 67 percent of the 1.21 billion population and has set in motion a substantial revision in salaries and pensions for almost 8 million government workers.

To try to keep the budget on target, Chidambaram has already introduced small-bore austerity measures, such as a ban on new hiring and meetings in five star hotels, plus travel restrictions. The finance ministry estimates the measures will save about 100 billion rupees this fiscal year.

Chidambaram has still to identify the specific areas to be hit if new cuts are agreed, the officials said, adding they expected the picture to become clearer by the end of this month when they hope to have revised revenue estimates.

While government officials insist that tax collection targets will be met, analysts say the effects of slower economic growth will automatically hit revenues.

The budget had banked on tax collections this fiscal year growing nearly 19 percent. In the first five months of the fiscal year between April and August, net tax receipts stood at 20.8 percent of the full-year target. By August last year, receipts were stronger, standing at 22.7 percent of the target.

However, tax revenues tend to pick up from the second half of the fiscal year, finance ministry officials say.

There are also doubts as to whether the government can raise the 540 billion rupees it had planned from share sales in the current fiscal year when turmoil in financial markets has already derailed plans for stake sales in some state-run firms.

"Tax collections are under pressure. The manufacturing sector has slowed down dramatically, which means excise and corporate income tax will be lower," said Pronab Sen, chairman of the National Statistical Commission, the government body which monitors macro economic data.

Some finance ministry officials fear nominal GDP growth this year may slip to around 11 percent compared with a budget projection of 13.4 percent, making it tougher to meet the fiscal deficit target as a percentage of GDP.

Last week, India's oil minister shied away from introducing comprehensive energy subsidy cuts, instead calling on his countrymen to embrace car pooling, buses and cycling as well as staggered working hours in a bid to curb fuel consumption.

The rating agency said the government would need to hike diesel prices by nearly 16 percent from October to keep the subsidy within budget.

While a headline-grabbing set of spending cuts is unlikely to be announced to assuage nervous investors and credit rating agencies, officials say measures will be put in place over the coming months if new data shows continued weakness.

The size of spending cuts in part will be known only in February's budget. The full extent of last year's budget cuts were made public only last month.

"You do not need to announce the cut. You send instructions to the financial advisers and stop releasing funds," said Sen, adding the actual spending cuts could be visible by year end.