The Planning Commission will pitch for lowering the average annual growth rate for the 12th Five Year Plan to 8 percent, from 8.2 percent at the meeting of the National Development Council (NDC) in New Delhi on Thursday.

"Our objective is that we should be going in for a more optimistic scenario ...And probably if we reflect, what we now know (is that) instead of 8.2 percent, it would be better to pitch it at 8 percent.I would raise that issue in the NDC," Planning Commission Deputy Chairman Montek Singh Ahluwalia said. 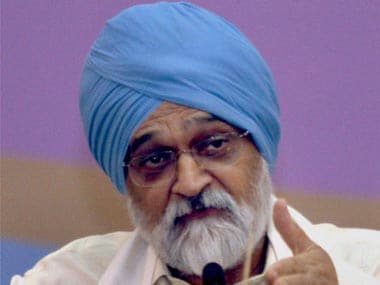 This lowering of growth target, he added, follows changes in the global and domestic economy since the approval of the Approach Paper by the NDC in October last year.

This is the second time that the Planning Commission will be scaling down the growth projection for the 12th Plan (2012-17).

After initially estimating the growth rate at 9 percent in its Approach Paper, it lowered the target to 8.2 percent in September 2012 in view of global economic worries and persistent sluggishness in domestic growth.

The issue will be considered on Thursday by the country's highest policy making body NDC, which is headed by Prime Minister Manmohan Singh and comprises cabinet ministers and chief ministers of all states.

In the 11th Five Year Plan, the average annual growth rate was 7.9 percent.