India to let corporates into banking despite concerns over risky loans

India will soon allow corporate houses to open banks despite misgivings within the Reserve Bank of India (RBI) as well as the International Monetary Fund that it could lead to risky loans if newcomers succumb to the temptation of lending to their related firms.

The government wants to reform a sector dominated by often lethargic state banks and which only reaches half the country's households. Ultimately, it hopes issuing banking licences to corporate groups - India's biggest conglomerate, the Tata Group, is reported to be interested - will provide fresh impetus for an economy that has struggled to close the gap with emerging market star China.

Final rules, expected soon, have been delayed over disagreement between the government and central bank on whether the traditionally more financially volatile sectors of property and brokerages should be allowed to apply for licences, which the RBI opposes.

Opponents of the new measures worry the reform, driven by the finance ministry, could backfire if risky loans from one branch of a company to another go bad and trigger a broader crisis. 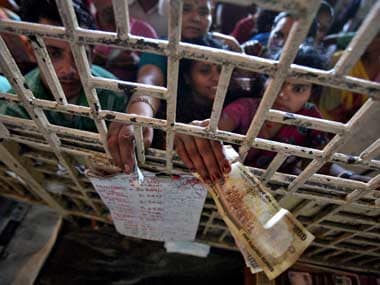 The draft also says new banks must be set up through a holding company, which will own at least 40 percent of the bank for five years. Reuters

"It will be like one person is cooking and the same person is eating it," said one critic, VK. Sharma, chief executive of LIC Housing Finance.

"Most of the time if they need money they will go to their own bank, and it will be difficult to regulate that," Sharma said. His firm, an arm of state-owned Life Insurance Corp of India, plans to apply for a banking licence.

The RBI regulates banks and has the final say on how the rules are shaped and implemented, but is not statutorily independent so takes the government's views into consideration.

"We are not at all happy with this," a central bank official said, echoing similar comments from several other RBI officials, on allowing corporate houses into banking. They declined to be identified given the sensitivity of the matter.

The RBI is not alone in its caution. Regulators in the United States and South Korea do not allow industrial houses to set up banks; Australia, Canada, Britain and Hong Kong allow them to, but with restrictions on ownership and voting rights.

Even the IMF has urged caution, saying in a report on India last month the risks may outweigh the benefits.

"The basic issue is the possibility of self-dealing," said Anand Sinha, the deputy RBI governor in charge of banking operations. "This is a risk which everybody recognises across the world, so that is why we have prescribed many safeguards."

Sinha said final rules would be issued soon. "When there is consultation, obviously you have to take into account the other side," he said on the sidelines of an event on Friday.

Part of India's rationale for allowing companies to open banks is to extend "financial inclusion", something the state-dominated banking sector has been slow to address.

No new Indian bank has been formed since Yes Bank in 2004. Proponents of issuing more licences hope deep-pocketed corporate-backed banks will bring the technology and appetite to operate in under-served markets.

About half of Indian households in the country of 1.2 billion are outside the banking system and branch penetration is low. India has about one-fourth the ratio of branches to adults that Brazil has; in the Philippines the density is even lower.

At least 10 companies, mostly finance firms that are either affiliated with a corporate house or independent, are lining up to apply for licences.

L&T Finance, part of construction and infrastructure conglomerate Larsen & Toubro , and billionaire Anil Ambani's Reliance Capital, are among those that have said they are keen to apply for a licence.

Hopefuls covet the chance to access cheap funds from depositors, looking to emulate nimble private-sector players led by HDFC Bank and ICICI Bank, which have grown quickly and profitably since India loosened state dominance of banking in 1995.

"You will be able to raise deposits, so funding will be a lot easier," said Ajay Srinivasan, chief executive of Aditya Birla Financial Services, part of Kumar Mangalam Birla's industrial empire that ranges from telecoms and metals to cement and retail, and plans to apply for a licence.

The Birla family, one of India's wealthiest, owned a bank that like other private sector lenders was nationalised in 1969.

Many finance companies expected to apply for licences, including Mahindra Finance, Bajaj Finance and Shriram Capital, which are part of corporate groups, already lend to borrowers who are typically outside the banking system.

Such applicants are expected to be looked upon favourably.

Known as a conservative regulator, the RBI is likely to filter out applicants with heavy ownership concentration, poor corporate governance records and weaker finances, officials said. A large share of business in India is conducted by family-run conglomerates with a controlling shareholder and relatively low transparency.

The draft also says new banks must be set up through a holding company, which will own at least 40 percent of the bank for five years. That shareholding must be reduced to 15 percent within 12 years, and banks will be required to list publicly within two years of winning a licence.

Among the safeguards is a recent amendment to banking law that empowers the RBI to inspect the books of banks' associate companies in case of wrongdoing, or even to supersede a board, a change implemented to placate the RBI's concerns.

"There will be clear firewalls and red lines which cannot be crossed," Finance Minister Palaniappan Chidambaram told Reuters Television in London on January 29.