New Delhi: As a probe continues into misuse of stock markets for routing black money and tax evasion, the regulatory and other agencies suspect that GDR route is being used for bringing back suspected illicit funds stashed abroad.

The modus-operandi, in cases currently under scanner, involves an intricate web of entities registered in various jurisdictions, including Switzerland, Hong Kong, Singapore, Mauritius, Dubai and Canada, for multi-layered transfers of funds before bringing them back to India.

Sources said that the capital markets regulator Sebi has come across quite a few cases where GDR (Global Depository Receipt) route could have been used for round-tripping of funds in the name of capital-raising activities of listed companies from abroad. The issue has also been flagged by some other agencies while probing financial matters.

GDR is a popular financial instrument used by listed companies in India, as also in many other countries, to raise funds denominated mostly in US dollar or euros. 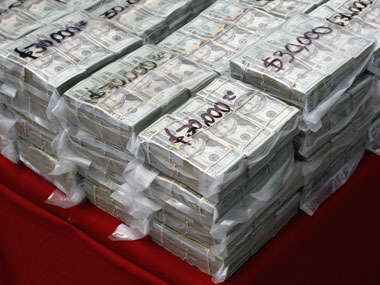 GDRs are typically bank certificates issued in more than one country for shares of a company, which are held by a foreign branch of an international bank. While shares trade on a domestic stock exchange, which happens to be in India in the present case, they can be offered for sale globally through the empanelled bank branches.

In the cases under scanner, it has been noticed that the companies have shown having raised funds without actually involving the real investors, hinting possible routing of black money, a senior official said.

Besides, links have emerged in some cases between the entities linked to the issuer company and those from whose accounts such funds get transferred in the name of fictitious investors, he added.

For further transfer of funds, purportedly raised through GDRs, the companies show fictitious business dealings and several bank accounts are used before the money reaches the final beneficiaries.

Round tripping of funds has been a major route for those laundering black money. It typically involves an entity transferring an asset or funds, in the name of a business
deal, with an agreement to buy it back.

Such practices also involve inflating the size of business transactions without making any real profits and are undertaken mostly to transfer illicit funds or other such
assets.

Besides GDRs, the regulatory and other agencies are already probing the suspected misuse of stock markets within India to evade taxes and launder money through trading in companies that mostly exist on paper.

Sebi is focussing on securities market related violations by these individuals and companies, who have used trading in at least 25 listed companies to evade taxes and convert black money into 'legitimate-looking' funds, by creating fictitious gains or losses in the stock market.

Sebi is also looking into the use of derivatives trading by such entities, while it has asked other agencies including Income Tax Department, Enforcement Directorate and Financial Intelligence Unit to further investigate the cases of tax evasion and money laundering, sources said.

While investigation has reached advanced levels in the case of trading in these 25 listed companies, whose shares had shown extreme gains without any fundamental reasons, the regulator may also expand the scope of its probe and the number of such entities could grow much higher.

A large number of over 1,000 entities -- currently under scanner, which include individuals and 'shell' companies created by them -- are actually related to those already facing action by Sebi or other regulators including in some major scams that have come to the fore in the recent past.

These include entities related to 'cash for loan' scam, being investigated by CBI, as also the NSEL default case that is being probed by multiple regulators and agencies.

Some of them could be top executives and promoters of various other listed companies.
These entities have facilitated illicit transactions worth thousands of crores of
rupees over the past 2-3 years.

It has emerged during initial investigations by Sebi and stock exchanges that such illicit activities tend to accelerate during last few months of a fiscal and quantum of such transactions has grown manifold in the last few years.

Besides, a number of such entities have been found to be repeat offenders for various offences in the securities market and many of them create new shell companies to hide
their past precedents.

While it may be difficult to quantify the entire value of black money laundered through stock markets, as also the total tax amounts evaded through this platform, sources said that the total figure may easily run into thousands of crores of rupees given the spread of such illicit activities.

In just two cases, where Sebi earlier this month passed interim orders, total illicit gains estimated worth over Rs 500 crore have come to the fore in case of a select few
entities.

Besides, being possible cases of money laundering or tax evasion, Sebi has found such activities to be securities market frauds as well, as they involve manipulative transactions in securities and misuse of the market.

In its biggest-ever crackdown for suspected tax evasion and laundering of black money through stock trading platforms, Sebi last month barred 260 entities, including individuals and companies, from the securities markets.

The action came at a time when the government has sharpened its focus on unearthing black money stashed abroad and within the country, while Sebi also recently tightened its surveillance of shell companies created solely for the purpose of tax evasion or money laundering activities.

The modus operandi of such entities typically involves stock market dealings aimed at evading capital gains tax and showing the source of income as legitimate from stock markets.