Chart: Mumbai realty is of the rich, by the rich, for the rich

Just two numbers tell us the story of Mumbai's real estate over the last seven or eight years.

One, between 2006 and 2011, the construction of flats which cost up to Rs 25 lakh fell from 21 percent of the total Mumbai Metropolitan Region (MMR) region to merely nine percent. In the same period, construction of flats that cost more than Rs 2 crore rose from 9 percent to 22 percent, as seen in the chart below. Mumbai is now out of reach of the middle class. 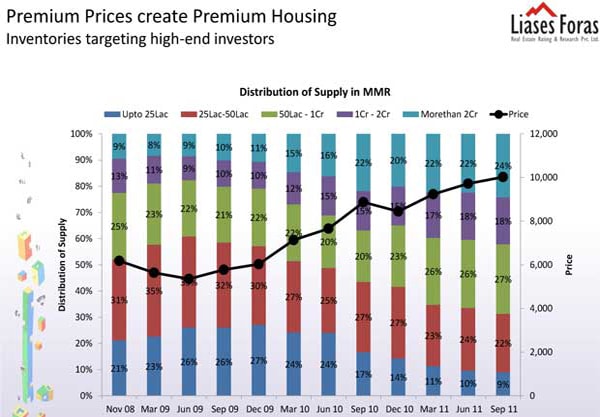 Two, thanks to skyrocketing real estate prices, lakhpatis of 2005 are now crorepatis in real estate terms. A flat costing Rs 27 lakh in January 2005 is now valued at Rs 1.04 crore in the MMR region. That's an appreciation of 285 percent! No wonder wealthy NRIs and investors see Mumbai property as a safe haven for their money.

As things stand today, Mumbai's real estate is among the most expensive in the world but there is still no shortage of buyers at the upper end of the market. The market is as much driven by dollar-rupee exchange rates than domestic loan rates. This is evident from the fact that foreign capital in the housing sector jumped from Rs 171 crore in 2006, when FDI opened up to the realty sector, to Rs 14,027 crore in 2010, according to data available with DIPP (Department of Industrial Policy and Promotion). The number, however, has now come down to Rs 5,600 crore in 2011 due to the global economic uncertainties. Clearly, the fortunes of the wealthy even in real estate are interlinked with the stock market boom of the 2000s. Hot foreign inflows have made realty unaffordable to locals. The vast inflow of capital pushed up land costs and the spiralling prices invariably pushed actual consumers away from the sector. Instead, investors with surplus cash were roped in. Since an investor-driven market is less transparent and has a lot of complexities, it began to attract a lot of black money.

The result? Sky-rocketing property prices. Price and cost of flats in MMR increased at a compounded annual growth rate of 22 percent since the infusion of foreign capital!

Here are three consequences of an investor-driven real estate market:

1. Developers justified the escalating prices to increasing land and construction costs. All the high- priced land deals were later blessed with incentive FSI to make a project viable. Developers, and perhaps politicians, did gain but it spoiled the urban economic balance, leaving the whole city hooked to high prices!

Clearly builders are targeting high-end investors to deliver promised returns to private equity (PE) funds. " In order to accommodate the PE investor, property prices rose 43 percent in one year alone. Accordingly, land prices rose by 55 percent and in turn investors as a proportion of home buyers now make up more than 70 percent of the Mumbai market," said Kapoor.

Third, the crux of the problem is this: A market driven by free-flowing capital will only address the needs of the investor and not the genuine buyer and nor will it ever address the affordability problem.

Private equity should only be restricted to capital-intensive assets such as commercial and hospitality, while residential should only work on sales proceeds, says Kapoor. It is this private equity investment in the unregulated real estate sector that has resulted in the sharp rise of billionaire wealth in India.

According to an article titled 'Where Do India's Billionaire's Get their Wealth' published in the Economic and Political Weekly, 43 percent of the total number of billionaires, accounting for 60 percent of billionaire wealth in India, had their primary source of wealth from rent-providing avenues: think sectors like real estate, infra and construction, "because of the pervasive role of the state in giving licences, reputations of illegality, or information on monopolistic practices."