By Balazs Koranyi and Francesco Canepa FRANKFURT (Reuters) - European Central Bank President Mario Draghi acknowledged on Thursday that economic growth in the euro zone was likely to be weaker than earlier expected due to the fall-out from factors ranging from China's slowdown to Brexit The region's economy is already suffering its biggest slowdown in half a decade, raising questions over whether the ECB will be able to increase interest rates for the first time in a decade later this year as its current guidance indicates. The ECB left that guidance and interest rates unchanged at its meeting on Thursday. 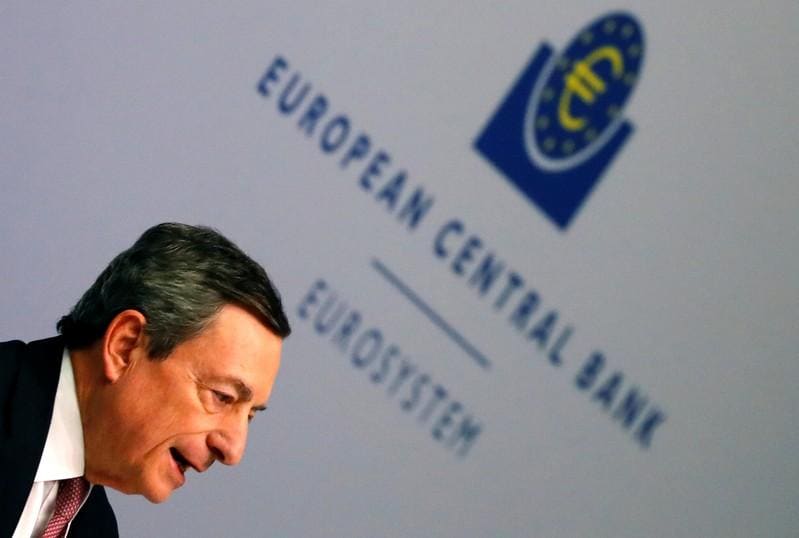 The region's economy is already suffering its biggest slowdown in half a decade, raising questions over whether the ECB will be able to increase interest rates for the first time in a decade later this year as its current guidance indicates.

The ECB left that guidance and interest rates unchanged at its meeting on Thursday. But Draghi's downbeat comments, including a reference to "downside" risks, will fuel market speculation that the bank will delay any rate hike, mirroring a more cautious approach by the U.S. Federal Reserve, and may offer new cheap loans to banks.

"The risks surrounding the euro area growth outlook have moved to the downside on account of the persistence of uncertainties," Draghi told a news conference, citing trade and geopolitical threats and emerging market volatility.

"The near-term growth momentum is likely to be weaker than previously expected."

His comments pushed the dollar to a more than five-week high against the euro. The single currency was 0.45 percent lower against the dollar at $1.1329, after falling as low as $1.1308, its weakest since Dec. 17.

Despite citing the rising risks, Draghi nonetheless reeled off reasons for not changing policy now, notably the strength of the region's labour market and rising wage growth, which he said would help push underlying inflation up over the medium term.

"The key factor to assess is the persistence of the uncertainty," he said, adding he was confident that those uncertainties -- ranging from the outcome of Brexit to China's slowdown and trade protectionism -- were being addressed.

"The Governing Council will give itself more time to assess whether all these risk factors have affected confidence and we are going to have another discussion in March when we will also have the new (growth) projections."

Draghi said the Governing Council was unanimous both in acknowledging the growth slowdown and the factors causing it but some policymakers were less optimistic than others about the economic outlook.

With the ECB already owning a quarter of the euro zone's outstanding governing debt, analysts were expecting it to turn to other instruments to keep credit flowing.

A new round of cheap multi-year loans to banks, known as Targeted Long-Term Refinancing Operations (TLTRO), was widely seen as the first port of call.

"We do expect an announcement in March that (T)LTROs will be extended, most likely via two-year, variable rate operations," Frederik Ducrozet, an economist at Pictet Wealth Management, said.

Draghi said on Thursday TLTROs had been raised by several policymakers but no decision had been taken.

Having ended a landmark 2.6 trillion euro ($3 trillion) bond purchase scheme just weeks ago, the ECB said on Thursday it still expected to keep interest rates at record lows "through" the summer, sticking with its long-standing guidance even though markets now see a much later move.

Investors see a rate hike only in mid-2020 while a Reuters poll of economists predicted the first rise in nearly a decade in the fourth quarter.

"When markets place the first rate hike in 2020, they are using the state contingent part of our forward guidance...and it shows that they have understood our reaction function," Draghi said.

With Thursday's decision, the ECB's deposit rate, now its main benchmark, remains at -0.40 percent while the main refinancing rate, its key rate during normal times, stands at 0.00 percent.

Germany, France and Italy, the euro zone's biggest economies, barely grew in the fourth quarter of 2018 and survey data showed on Thursday business activity across the euro zone expanded at the slowest pace since 2013 at the start of this year.

Draghi said on Thursday that the ECB did not see recessions as likely in Germany or Italy but the reference to downside risks meant the central bank had now given up its facade of optimism and joined the Federal Reserve in signalling a more cautious stance.

Some policymakers have in the past objected to changing the risk assessment since such a move would raise expectations of policy action and the ECB is not yet prepared for such a move just weeks after ending its biggest stimulus scheme.

"With today’s meeting, the ECB has joined the crowd of concern," Carsten Brzeski, an economist at ING, said. "The return of a downside risks to the growth assessment does not, yet, signal any policy changes but only a slight easing bias."