By Balazs Koranyi and Francesco Canepa FRANKFURT (Reuters) - The European Central Bank launched a 750 billion euro (709.5 billion pounds) emergency bond purchase scheme after an unscheduled meeting on Wednesday, attempting to stem a spiralling economic and financial crisis. With much of Europe in lockdown amid the coronavirus outbreak, economic activity has come to a near standstill and markets have been in a tailspin, foreshadowing a deep recession on par with the downturn seen in the 2008 global financial crisis. 'Extraordinary times require extraordinary action,' ECB President Christine Lagarde said. 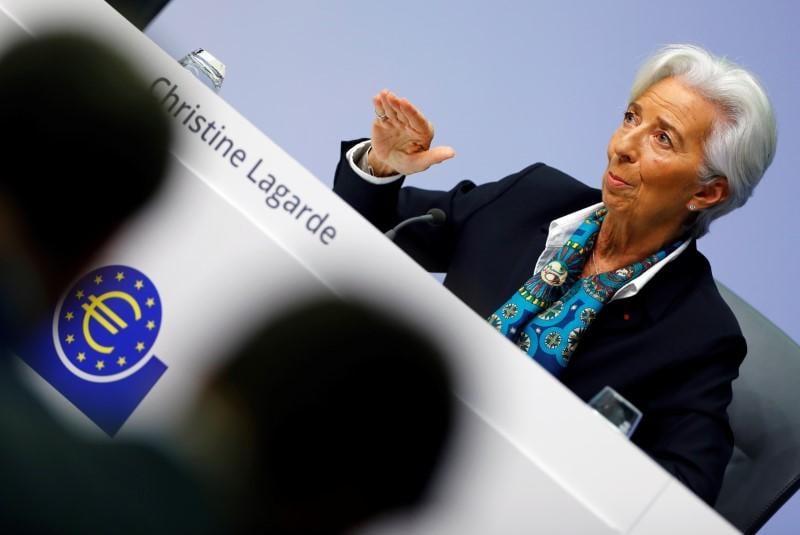 With much of Europe in lockdown amid the coronavirus outbreak, economic activity has come to a near standstill and markets have been in a tailspin, foreshadowing a deep recession on par with the downturn seen in the 2008 global financial crisis.

"Extraordinary times require extraordinary action," ECB President Christine Lagarde said. "There are no limits to our commitment to the euro. We are determined to use the full potential of our tools, within our mandate."

The bond purchases will continue until the "crisis phase" of the epidemic is over and non-financial commercial paper will also be included for the first time among eligible assets, the ECB said.

Although the ECB's purchases will be done according to each country's shareholder in the bank, the so-called capital key, the ECB said it would be flexible and may deviate from this rule, a hint that it will not tolerate a surge in yield spreads between euro zone members.

The purchases will also include for the first time debt from Greece, which has been shut out of ECB buys because of its low credit rating.

However, the ECB left its minus 0.5% deposit rate unchanged just as it did last Thursday, another sign that policymakers may now see a further cut doing more harm than good.

Meeting in a regular session last Thursday, the ECB approved a large stimulus package but the measures disappointed investors, prompting some to question the bank's commitment to former ECB boss Mario Draghi's pledge to do "whatever it takes" to save the euro.

With bond yields on the bloc's periphery soaring and the spread between Italian and German ten-year debt doubling in just a few days, pressure has been mounting on the ECB to do more.

Panic selling pushed 10-year Italian yields above 3% briefly on Wednesday, raising concerns about the sustainability of its debt, before ECB purchases and verbal intervention pushed it back to around 2.3%.

Additional measures from Frankfurt may not of course fix the issue -- aggressive rate cuts and far greater bond-buying by the U.S. Federal Reserve haven't calmed sentiment.

U.S. stocks deepened their selloff on Wednesday and the Dow erased virtually the last of its gains since President Donald Trump's 2017 inauguration, as the widening repercussions of the coronavirus pandemic threatened to cripple economic activity.