By Balazs Koranyi and Francesco Canepa FRANKFURT (Reuters) - The European Central Bank is all but certain to keep policy unchanged on Thursday but may acknowledge a sharp slowdown in growth, raising the prospect that any further policy normalisation could be delayed. The ECB last month ended a landmark 2.6 trillion euro ($2.96 trillion) bond purchase scheme and maintained its guidance that an interest rate hike is likely late this year. But growth appears weaker than thought just a few weeks ago, suggesting that its next move could even be an easing of policy rather than a tightening 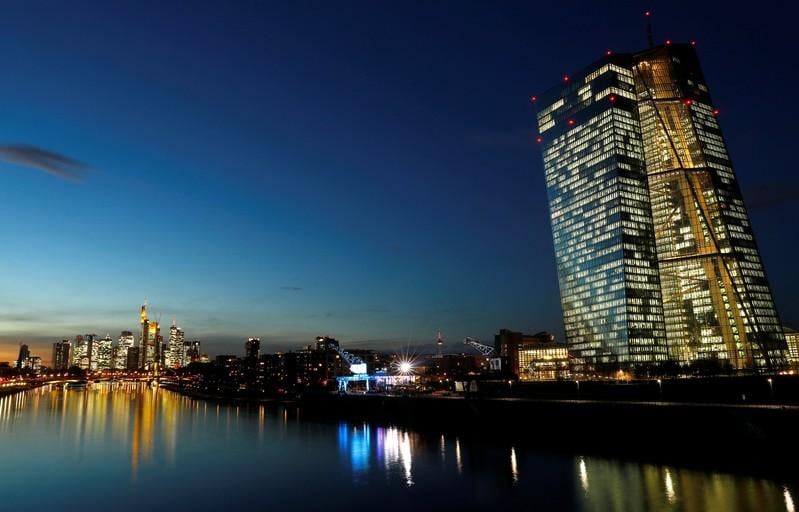 FRANKFURT (Reuters) - The European Central Bank is all but certain to keep policy unchanged on Thursday but may acknowledge a sharp slowdown in growth, raising the prospect that any further policy normalisation could be delayed.

But growth appears weaker than thought just a few weeks ago, suggesting that its next move could even be an easing of policy rather than a tightening.

Germany, France and Italy, the euro zone's biggest economies, barely grew in the fourth quarter and ECB President Mario Draghi has already acknowledged that the slowdown could be longer than expected, setting up the ECB for a dovish meeting.

With much of its firepower depleted, Draghi will use his few remaining tools sparingly, suggesting Thursday's meeting will be more about words than action.

At most, Draghi could downgrade the bank's economic assessment, arguing that growth risks are now tilted to the downside. He could also provide clues about new loans to banks, called Long-Term Refinancing Operations or LTROs, likely to come in the spring.

"In such a fluid environment, when net asset purchases have just ended and the ECB has not yet achieved its inflation goal, Mario Draghi will want to get ahead of a deterioration in confidence to avoid it becoming self-fulfilling," Deutsche Bank said in a note to clients.

"Even if the balance of risks does not formally change, we would expect a sufficient shift in tone to signal the same thing," Deutsche added.

The problem with downgrading the risk assessment is that such a change in the bank's guidance would naturally raise expectations of policy action.

But the ECB is not yet ready to tweak its stance, so any change in the guidance would risk creating an impression that policy is not in sync with policymakers' assessment of the economy.

Draghi could also opt to stick with the bank's December formulation that growth risks are still broadly balanced, even if they continue to shift to the downside.

The ECB announces its policy decision at 1245 GMT and Draghi will hold a news conference at 1330 GMT.

The problem is that a growth dip, seen as temporary just a few months ago, shows no sign of going away.

Manufacturing contracted near the end of 2018, export growth slowed and sentiment indicators are falling towards multi-year lows.

A predicted rise in underlying inflation has also failed to materialise and employment growth is slowing, a worrying sign for wages and inflation.

All this suggests that the euro zone is now growing at or even below trend, so inflationary pressures may take longer to build, testing the credibility of the ECB, which has undershot its price growth target since early 2013.

Some of the weakness may be temporary, like the struggles of the German auto industry to adjust to new emissions standards, investor caution ahead of Brexit or the drag on sentiment from protests against French President Emmanuel Macron.

But sluggish external demand is likely to be more persistent, with China's economic struggles likely to exacerbate the slowdown.

If such a drag on growth persists, the ECB will be pressed to signal record low rates for even longer, providing more stimulus by delaying a hike.

It could also offer long-term loans to banks on more generous terms and may tweak its guidance on how long it plans to invest cash from maturing bonds back into the market.

Policymakers can afford to wait before taking more concrete steps, hoping for growth to pick up in the coming months and letting markets do its work for now by shifting rate hike expectations as data disappoint.

Investors now see a hike only in mid-2020, keeping borrowing costs low, even without explicit commentary from the ECB.

"If, however, we move from a risk of a technical recession in some countries, our baseline, to a protracted downturn with knock-on effects on the labour market and possibly financial stability, then the ECB would be forced into something more drastic," Bank of America Merrill Lynch said.

"‎We don't think the ECB is there, especially not in the midst of a succession debate for several board positions, which probably incentivises a lot of candidates to take a centrist stance."