By Francesco Canepa and Balazs Koranyi FRANKFURT (Reuters) - European Central Bank President Mario Draghi all but pledged to ease policy further as the growth outlook deteriorates and even hinted on Thursday at a reinterpretation of the ECB's inflation target, the cornerstone of its entire policy framework. Officials told Reuters after the meeting that an interest rate cut in September appeared certain, while government bond purchases and a revamped policy message were also likely. 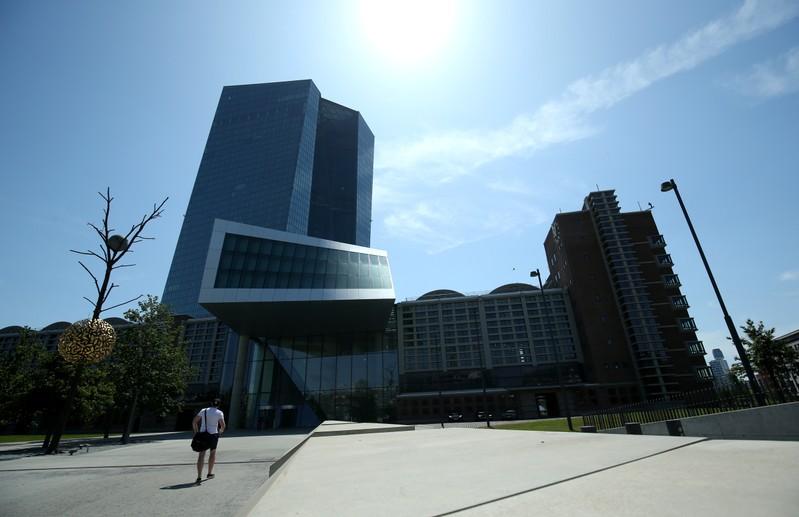 FRANKFURT (Reuters) - European Central Bank President Mario Draghi all but pledged to ease policy further as the growth outlook deteriorates and even hinted on Thursday at a reinterpretation of the ECB's inflation target, the cornerstone of its entire policy framework.

Officials told Reuters after the meeting that an interest rate cut in September appeared certain, while government bond purchases and a revamped policy message were also likely.

Euro zone inflation has undershot the ECB's target for the past six years -- most of Draghi's eight-year term -- and he said the outlook looked bleak as a global trade war hit Europe's export-focused manufacturing sector.

That threatened to infect a so-far resilient domestic economy that had not yet fully recovered from the bloc's debt crisis.

The ECB has targeted an inflation rate of 'close to but below' 2% for 16 years but Draghi said that, after the prolonged shortfall, the target was considered to be symmetric - or to extend on both sides of 2% - and there would be no cap at 2%.

He said some policymakers were even advocating a wholesale change to the inflation target for the first time since 2003.

"We don't like what we see on the inflation front and symmetry means basically there is no 2% cap," Draghi said.

A source said policymakers had attended a policy seminar this month where they were presented with the option of targeting an average inflation rate over time.

Allowing inflation to run above 2% for some time to compensate for missing the target could be seen as a de facto increase to the target, a move some policymakers warned against at June's ECB meeting, according to published minutes.

After the bank kept rates unchanged on Thursday, Draghi said it was devising a stimulus package, possibly for September.

In a precursor to a rate cut, the ECB said it saw rates at present or lower levels through mid-2020, a subtle change to its previous pledge to keep rates unchanged through next June.

Draghi added that the ECB could also compensate banks for even lower rates by offering a multi-tier deposit rate. That would shield them from what is effectively a charge imposed on excess reserves they hold securely at the ECB.

Of those tools, a cut in the ECB's deposit rate had the broadest consensus, while a tiering system still left some governors unconvinced, according to sources who spoke on condition of anonymity.

They added that a resumption of the ECB's 2.6 trillion euro ($2.90 trillion) bond-buying programme was also a possible option, with more government bonds the first item on the shopping list.

The case for ECB stimulus is supported by weak economic data, particularly in foreign trade and manufacturing, the engine of the euro zone economy's recent growth run.

"There is far and wide nothing to be seen of the second-half recovery hoped for in many places," Commerzbank economist Joerg Kraemer said. "Germany is in a grey area between a marked growth slowdown and a recession."

But whichever measures the ECB opts for will come with complications and have only limited potency, since the bank has already exhausted much of its firepower in the wake of the euro zone debt crisis that peaked in 2012.

While policymakers say they have leeway to adjust their rules, critics of the bank's asset purchases, who have already launched several legal challenges, would be almost certain to take the ECB back to court.

"It is doubtful that this will succeed in bringing the inflation rate in the euro zone close to 2%," said Isabel Schnabel, a member of the German government's economic advisory council. "At the same time, the risks to financial stability continue to rise."