By Francesco Canepa and Balazs Koranyi FRANKFURT (Reuters) - The European Central Bank formally ended its 2.6 trillion euro crisis-fighting bond purchase scheme on Thursday but promised to keep feeding stimulus for years into an economy struggling with an unexpected slowdown and political turmoil. In a precarious balancing act, ECB President Mario Draghi signalled both confidence about growth and concern over rising uncertainty, justifying the end of asset purchases after four years and the promise of lengthy support 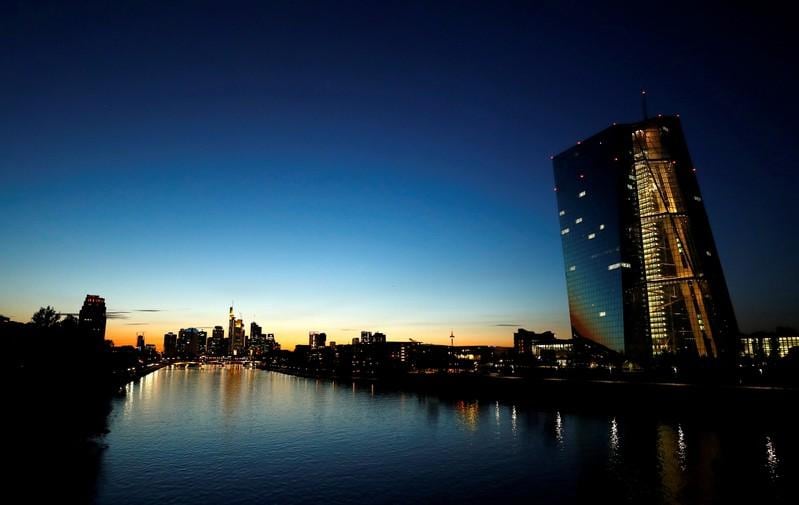 FRANKFURT (Reuters) - The European Central Bank formally ended its 2.6 trillion euro crisis-fighting bond purchase scheme on Thursday but promised to keep feeding stimulus for years into an economy struggling with an unexpected slowdown and political turmoil.

In a precarious balancing act, ECB President Mario Draghi signalled both confidence about growth and concern over rising uncertainty, justifying the end of asset purchases after four years and the promise of lengthy support.

Some ECB policymakers wanted him to adopt an even more cautious tone on the euro zone's economic prospects but all stood behind the decision to dial back the stimulus, two sources told Reuters.

The ECB's problem is that growth is weaker than expected even just weeks ago, while the outlook is clouded by the threat of a global trade war, the prospect of a hard Brexit and Italy's budget standoff with the European Commission.

But quantitative easing has run its course and any extension would have hit the ECB's credibility after it flagged the scheme's end back in June.

In the end, the ECB tweaked the wording of its statement to reflect the increased economic concerns but kept its reference to balanced risks.

"Risks surrounding the euro area growth outlook can still be assessed as broadly balanced," Draghi told a news conference after a meeting of the ECB's Governing Council.

"However, the balance of risk is moving to the downside owing to the persistence of uncertainties related to geopolitical factors, the threat of protectionism, vulnerabilities in emerging markets and financial market volatility."

The ECB lowered its growth and inflation projections for next year, forecasting a steady slowdown in the coming years as the effect of the stimulus wanes and growth returns to the currency bloc's natural potential at about 1.5 percent.

That may still be optimistic. Growth figures, particularly from the bloc's biggest nations, continue to disappoint, suggesting that a dismal third quarter was not an anomaly, as some argue.

"Given how much the downside risks have mounted and how long the ECB has been mentioning the risks without changing its risk assessment, it almost seems like the ECB has a blindspot for downside risks," Nordea economist Jan von Gerich said.

Draghi stuck close to the bank's argument that the drivers of growth remain in place and that the slowdown is merely a return to normal after an exceptional run.

He also argued that for much of the last four years, the ECB's asset purchases had been the only driver of the recovery, suggesting a slowdown is a natural consequence of the ECB's retreat.

For an EXPLAINER on life after QE, click on:

Draghi also offered some concrete measures of support and hinted that more may come, keeping markets relatively calm and even weakening the euro a touch with his dovish communication of a hawkish decision.

The ECB promised to keep rates at current record lows at least through next summer and Draghi made no attempt to change market expectations that a first post-crisis interest rate rise will come only in early 2020.

He also said the ECB would keep investing cash from maturing bonds back into the market for an "extended period" after the first rate increase, vague wording that gives the bank plenty of flexibility.

While markets see reinvestments going for the next three years, Draghi said policymakers were intentionally noncommittal.

New long-term loans to the banking sector were also discussed at the meeting, though not at great length, Draghi said, indicating that the ECB was keeping this option on the table if lenders need more liquidity.

Previous long-term loans expire only in mid-2020 and the ECB is expected to decide early next year whether to roll them over.

"All in all, the ECB has stopped the autopilot and has returned to monetary policy by sight. For now, the ECB is keeping as many cards to its chest as possible to keep a maximum degree of flexibility," ING economist Carsten Brzeski said.