Eating out at a 5-star hotel? You may soon be forced to pay by card only

Never mind that eating out has gotten more expensive thanks to the government raising service taxes to 14 percent from the current 12.36 percent, but you may soon have to start paying by card only  if you have incurred bill of over Rs 5,000 while eating out at a four or five star hotel.

The government is looking to promote use of plastic money and restrict cash payments to check black money in the system. One of the proposals is mandatory payment by credit or debit cards if a bill exceed beyond a specified limit.

The finance ministry is setting up a committee to suggest measures to incentivise credit or debit card transactions and one of the measures being proposed is all payments of above Rs 5,000 in a five-star hotel will have to be made by cards only,finance secretary Rajiv Mehrishi is quoted as saying in the Financial Express.

Harsh Mariwala, chairman of Marico is all for the move and hopes the government will extend the proposal to  all outlets where the rich shop.

Payments at five star hotels only thru credit card ,hope govt implements same beyond luxury hotels to all outlets where rich shop 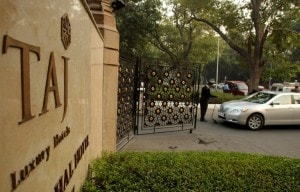 Finance Minister Arun Jaitley during his budget speech had said one way to curb the flow of black money is to discourage transactions in cash.

"Now that a majority of Indians has or can have, a RuPay debit card, , I, therefore, propose to introduce soon several measures that will incentivise credit or debit card transactions, and disincentivise cash transactions," Jaitley had said.

He also  announced a spate of measures in the budget to curb domestic black money.

He said: “a new and more comprehensive Benami Transactions (Prohibition) Bill will be introduced in the current session of the Parliament...This law will enable confiscation of benami property and provide for prosecution, thus blocking a major avenue for generation and holding of black money in the form of benami property, especially in real estate.”

A report in Times of India says that the committee may take cue from  the Special Investigative Team on black money, which had proposed that the government put a limit on cash holdings for private use and include provisions for confiscation of cash held beyond prescribed limits.

The Income Tax Act would  also be amended to “prohibit acceptance or payment of an advance of Rs20,000 or more in cash for purchase of immovable property while quoting of  permanent account number(PAN) has been made mandatory for purchase or sale exceeding the value of Rs1 lakh."

But as Firstpost editor-in-chief R Jagannathan pointed out, "How will any taxman know if I have paid more than Rs 20,000 in cash when I buy property when reported transactions may anyway be undervalued to avoid stamp duty? Will this be done by intrusive checks of bank accounts or by aggressively querying property sellers and buyers?