For Prime Minister Narendra Modi, ease of doing business is a prestige issue. Will the World Bank ranking give him a chance to celebrate and counter the critics?

India has moved into the top 100 rankings in the World Bank's 'Doing Business 2018' and is among the top 10 improvers in this year’s assessment by implementing 8 out of 10 reforms. The Narendra Modi government has indeed reasons to celebrate the improvement in the World Bank rankings since the structural reforms it has initiated such as GST has been duly acknowledged. This improvement in rankings reflects certain important areas such as paying taxes (118 from 172 last year), getting credit (29 from 44), bankruptcy proceedings (103 from 136) etc. However, a closer look at the individual segment rankings also shows that improvement in certain other critical areas is not up to expectations. For instance, when it comes to starting business ranking has slipped by one notch to 156 from 155 last year and trading across borders to 146 from 143 in the last year. Unless areas such as land and labour reforms are addressed, the ground level situation for businesses won't change.

World Bank vice-president (South Asia region), Annette Dixon said, “India has embarked on a strong reform agenda to improve its business environment. The significant jump this year is a result of the Indian government’s consistent efforts, over the past few years. Due to the number of reforms undertaken by the government, India’s ranking has gone up.”

India in top 100 ranking for the first time

According to the latest World Bank’s ‘Doing Business 2018: Reforming to create jobs released today, India for the first time has moved into the top 100 in the ‘Ease of doing business’ segment.

World Bank's 2018 ease of doing business rankings, set to be released later in the day, is likely to bring good news to the Narendra Modi government for a few obvious reasons. These include hopes of quicker resolution of stressed assets with the progress on the Bankruptcy code, a simpler, unified tax economy promised by the GST regime among other policies to facilitate the business environment. All along, this government has presented its policy steps as enabling factors to create an investor-friendly economy. If the World Bank takes note of these policy steps, India's rankings could move up in a notable manner this year. But, regardless of what the rankings from multilateral institutions indicate, there is certainly more work needs to be done to facilitate an improved business environment. Most importantly, the government needs to work on land and labour reforms without delay as these are two major areas of concerns for any company wanting to set up factory in India. Also, streamlining the GST process at the earliest is key.

The World Bank released a fact sheet on the substantive changes India implemented 2016/17. Here are the areas where India has seen a change:

Dealing with construction permits: India reduced the number of procedures and time required to obtain a building permit by implementing an online system that has streamlined the process at the Municipality of New Delhi and Municipality of Greater Mumbai.

Protecting minority investors: Protections for minority investors were strengthened by increasing the remedies available in cases of prejudicial transactions between interested parties. This reform applies to both Delhi and Mumbai.

Paying taxes: In both Delhi and Mumbai, paying taxes was made easier by requiring payments to the Employees Provident Fund to be made electronically, and introducing administrative measures that make it easier to comply with corporate income tax regulations.

Resolving insolvency: India made resolving insolvency easier by adopting a new insolvency and bankruptcy code that introduced a reorganization procedure for corporate debtors and facilitated the continuation of the debtor’s business during insolvency proceedings. This reform applies to both Delhi and Mumbai. 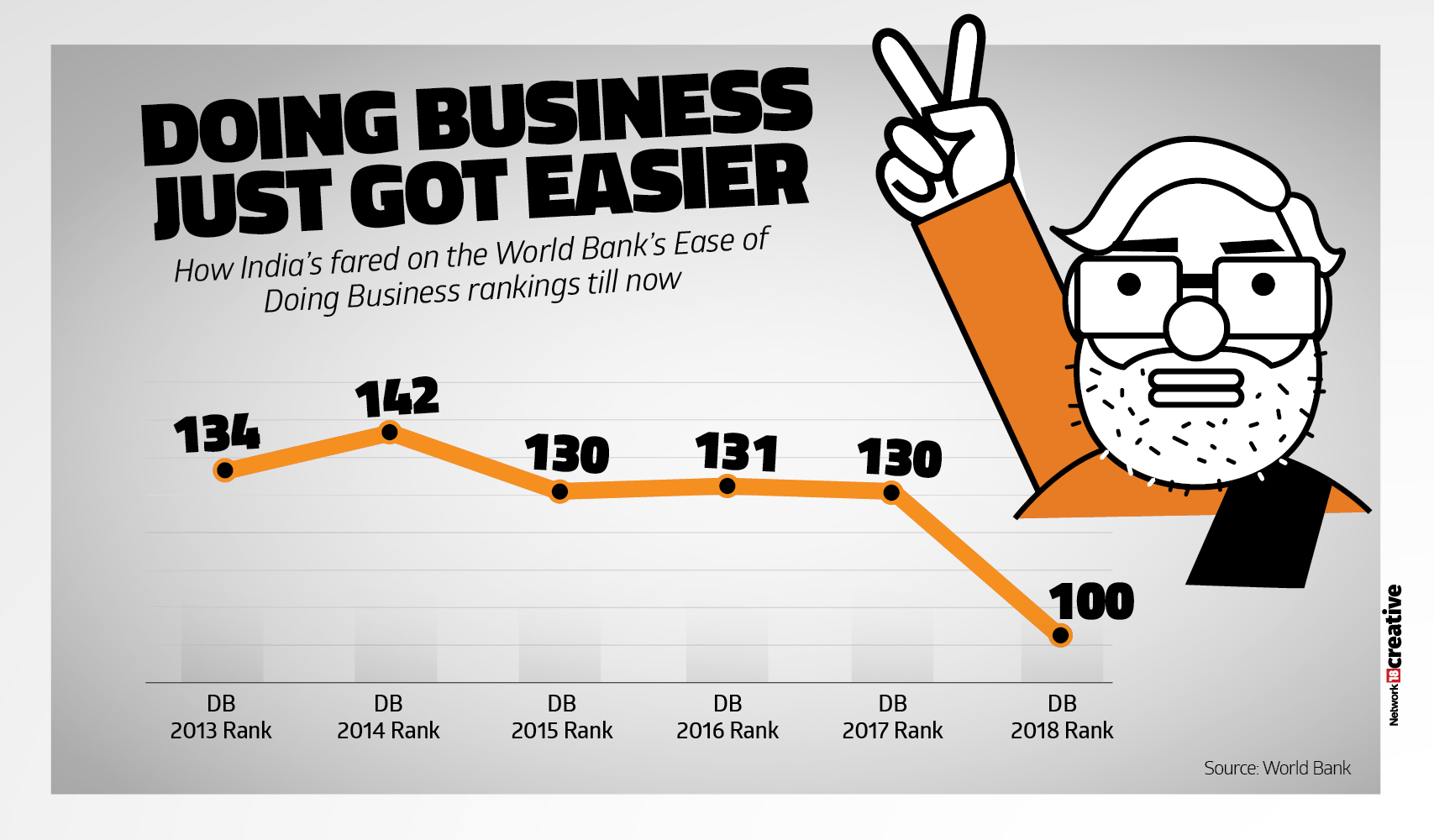 India is one of the top-10 improvers across the world this year: World Bank vice-president Annette Dixon tells ANI

The results are for the world to see. There has truly never been a better time to #MakeInIndia. @EODB_India @CimGOI pic.twitter.com/lVNIhUeqCs

Demonetisation not considered in ease of doing business 2018

The World Bank’s survey didn’t consider the Demonetisation factor and it wasn’t measured in this index. Read the report here.

Narendra Modi on the ease of doing business ranking

Historic jump in ‘Ease of Doing Business’ rankings is the outcome of the all-round & multi-sectoral reform push of Team India. pic.twitter.com/DhrEcuurgi

Over the last 3 years we have seen a spirit of positive competition among states towards making business easier. This has been beneficial.

It has never been easier to do business in India. India welcomes the world to explore economic opportunities our nation has to offer!

Guided by the Mantra of ‘Reform, Perform & Transform’ we are determined to further improve our rankings & scale greater economic growth.

Impact of GST on rankings may take 2 to 3 years: World Bank vice-president

On the impact of GST, World Bank vice president (South Asia region), Annette Dixon said that GST was a complicated reform to have rolled-out. Steps taken by the government this year may take 2 to 3 years to show results. This factor will be considered next year or after that.

"There is scope to jump up from rank 100," Jaitley said in the presser. There is reason to believe we have further capacity to improve, he added saying that when the NDA first came to power, Prime Minister Narendra Modi said that India can immediately reach the top 50 ranks. "I think this is believable," Arun Jaitley said, believing that India can expedite the process of India raising the bar in the rankings.

We were ranked 142 in 2014 and 130 last year in ease of doing business World Bank list, Jaitley said, highlighting how significant India's jump in the metric was. The World Bank report says India is one country which has been undertaking structural reforms, Jaitley said in a category where India has been ranked fourth. India has also seen betterment in protecting minority investors, the finance minister informed. As for resolving insolvency, India moved from rank 136 to rank 103. He also said that India jumped 53 places to 119 in ease of paying taxes. Considering how GST was implemented on 1 July, Jaitley pointed says that there is scope for India's rank to improve in this category even further in the future.

Will the World Bank's ease of doing business ranking for 2018 give a relief to the Narendra Modi government, which is drawing flak from within the BJP and outside for messing up the economy?

If the media reports, citing highly placed sources, are to be believed, it will. The country is likely to have jumped 30 places to hit 100th spot in the ranking that takes 190 countries into account, said recent reports.

The World Bank's rankings will be released on Tuesday 7:30 pm. Finance minister Arun Jaitley will also hold a press conference following the release of the report.

A report in The Hindu newspaper said the rise in the ranking is due to the changes in areas such as ‘starting a business’, ‘dealing with construction permits’, and ‘resolving insolvency’. Last year, when India moved just one notch up, the ranking in these areas were 155, 185 and 136.

“The low-rank last year galvanised India to act. There was an explicit order from the Prime Minister (Narendra Modi) to ensure faster reforms to improve India’s rankings,” a source has been quoted as saying in the report. According to this source, Mumbai and Delhi responded well to the government’s exhortation to better the environment, thus resulting in the jump.

“The successful implementation of the insolvency code and the goods and services tax (GST) has given a big boost to India’s business environment,” a top government official has been quoted as saying in another report in The Economic Times.

However, it has to be remembered that even the 100th position is a far cry from what Prime Minister Narendra Modi's initial wish. He had said that his aim is to take the country to the top 50 rankings in the World Bank report.

Ironically, the news comes at a time when small businesses are struggling with the goods and services tax, the indirect tax reform that the government implemented from 1 July. The government has tweaked the norms many times already in a bid to help the small traders tide over the cumbersome procedures.

Prior to that in November 2016, the government's shock demonetisation of Rs 500 and Rs 1,000 notes also had dealt a body blow to some of the cash-intensive small and medium businesses. The move had sucked out 86 percent of the currencies under circulation, resulting in a cash crunch that crippled the economy.

Both the moves have pulled down the GDP growth in the first quarter of the current financial year to the three-year low of 5.7 percent, prompting political leaders and economists from BJP and outside to slam the government.

Prime Minister Narendra Modi and his ministers will use any jump in ease of doing business ranking to counter the critics, whatever the ground reality is.

IPL 2021 Auction Live telecast channel list and live streaming details: When and where to watch

Here's all you need to know regarding the IPL 2021 auction which is slated to begin on 18th February in Chennai.