Dollar down vs euro after upbeat German data; sterling strong

By Saqib Iqbal Ahmed NEW YORK (Reuters) - The dollar slipped against the euro on Tuesday after a better-than-expected German economic sentiment survey boosted the common currency, while sterling hit a eight-month high against the greenback ahead of Thursday's British general election. 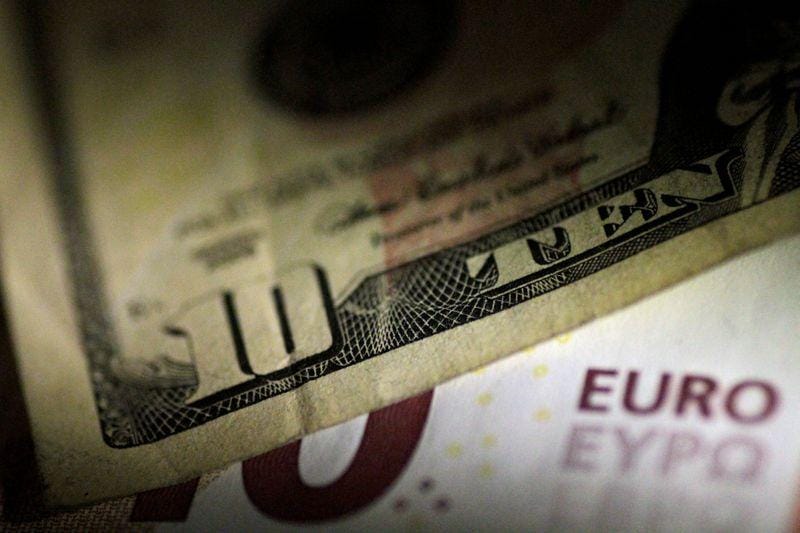 NEW YORK (Reuters) - The dollar slipped against the euro on Tuesday after a better-than-expected German economic sentiment survey boosted the common currency, while sterling hit a eight-month high against the greenback ahead of Thursday's British general election.

The euro was 0.28% higher at $1.1093 after the ZEW research institute's monthly index on economic morale among German investors showed the mood improved far more than forecast in December, with an unexpected rise in October exports boosting hopes for an upturn in Europe's biggest economy.

"The current assessment remains deeply in negative territory but did improve and beat expectations," he said.

The boost to the euro was unlikely to significantly change its direction against the greenback, John Doyle, vice president of dealing and trading, at Tempus Inc in Washington, said.

The common currency is down about 3.3% against the dollar this year.

Currency market moves on Tuesday were fairly muted as investors awaited developments from central bank meetings in the United States and Europe and as a Dec. 15 deadline for the next wave of U.S. tariffs on Chinese goods fed caution in global markets.

"The dollar is in familiar ranges, which is the new normal," said Doyle.

Investors are almost certain the Federal Reserve will leave rates unchanged when its two-day meeting ends on Wednesday, while the European Central Bank is likewise expected to keep interest rates steady on Thursday.

Investors were also awaiting the outcome of Britain's general election.

"Central bank meetings and the UK election are the biggest risk events this week so we see volatility picking up a touch starting tomorrow afternoon," he said.

U.S.-China trade talks remain in flux with little certainty about whether Washington will impose the new round of tariffs if the two countries are unable to agree on a limited trade deal by Dec. 15.

Sterling was up 0.42% at $1.3198, its highest level since late March, cementing recent gains as traders shrugged off weak economic growth data and kept an eye on the final days of campaigning before Thursday's election.