Last year, on 8 November, Prime Minister Narendra Modi announced the obsolescence of two high value paper currency, Rs 1,000 and Rs 500 notes, constituting 86 percent of the total cash money in circulation, at a short notice of barely four hours with an objective to unearth and dispose black money and control corruption in the economy. While the measure has been widely disputed and criticised in terms of being able to achieve its stated objectives, the ‘unintentional’ effects of the policy were felt across all sectors, especially the informal sectors including agriculture.

Over the last one year, a lot has been written and debated about the effects of demonetisation on agriculture. However, before assessing the impact of demonetisation on this particular sector, it is important to highlight that agriculture as a sector has been facing a distress situation over large parts in the last two decades, beginning somewhere in the middle of 2000s. While the reason for such distress in agriculture could be singularly directed towards the neglect of the sector by the policy regimes since the beginning of the 1990s, manifested in terms of reduced public investment in the sector, lowering import duties and reducing trade barriers and thus exposing the domestic farmers to the fluctuating prices of the global markets without providing adequate support, the consequences of such policies were manifested in several indicators.

The period has been marked with increased farmer’s indebtedness and a rapid increase in farmers’ suicides in large parts of the country, especially in states like Maharashtra, Andhra Pradesh, Karnataka and also in relatively agriculturally better off states such as in Punjab. The declining returns to agriculture were clearly linked to rising input costs and declining prices of agricultural commodities. Much of these are well documented in the scholarly works of economists, journalists and public policy experts working in these areas. 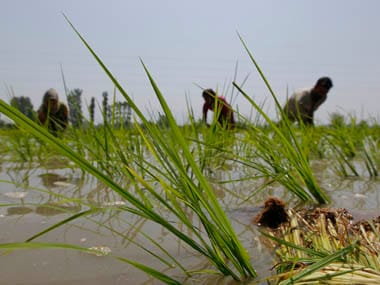 Last year, however, the monsoon were favourable after two consecutive drought years and a bumper crop and higher returns were expected in most parts of the country. The note-ban was announced at a time when the farmers had just harvested or were about to harvest with an expectation of returns that would also allow a better rabi season, compared with 2015-16. However, the ensuing cash crunch due to demonetisation led to certain breaks in the supply chains within the rural and agricultural markets resulting in overnight plummeting of the commodity prices.

Given the nature of the agricultural markets, a large part of the transactions are cash-based and thus the note-ban followed by a cash crunch came as a sudden jolt to the sector in terms of disrupting the regular transactions in the commodity and seeds markets. There were several reports of falling prices of potatoes, onions, tomatoes and many more in different parts of the country. First-hand reports were pouring in about farmers leaving their unsold harvest by the roadside, destroying their own harvests, or simply leaving the crop un-harvested due to severely declining prices.

According to many economists, the timing of the policy dealt a ‘body blow’ to the traditional agro-commercial capital. Harish Damodaran, a noted columnist for  Indian Express, highlighted that even though farm output for the last quarter of 2016-17 was 2.3 percent higher year-on-year, the fall in prices by 2 percent over the same period, resulted in the value of agricultural production rising just 0.3 percent. In sum, the expectations of making good returns took a beating as a result of demonetisation thus once again placing the farmers, traders as well as the landless agricultural labourers back into financial troubles despite a good harvest. These were also manifested in a series of farmers’ protests demanding for loan waivers, spread across several states, especially BJP-ruled states, in Madhya Pradesh, Maharashtra, Rajasthan, Chhattisgarh and so on.

In this backdrop, in which the ill-effects of demonetisation are still being felt by the agricultural sector, relief to the farmers and agricultural labourers have become absolutely essential. Certain basic measures such as fulfilling government’s promise of procurement prices at 50 percent higher than total cost, increasing direct procurement by the government, implementing MSPs as floor to the market prices and thus regulating the domestic prices to a certain extent would go a long way to help fight the declining prices of the agricultural commodities. It is also important to support the farmers in terms of ensuring access to institutional credit, both short term and long term, relieve the farmers of the burden of indebtedness with a holistic plan of loan waiver and not through the existing adhoc approach. It is also important to prioritise agriculture in the next Union Budget in order to provide greater allocations towards crop insurance, boosting irrigation facilities and higher allocation to Rashtriya Krishi Vikas Yojana.

(Author works at the Centre for Budget and Governance Accountability, New Delhi and can be reached at sona@cbgaindia.org; views are personal.)