By Lucia Mutikani WASHINGTON (Reuters) - U.S. consumer sentiment increased in early September, with Democrats more upbeat about the economy's outlook compared to Republicans ahead of the Nov. 3 presidential election 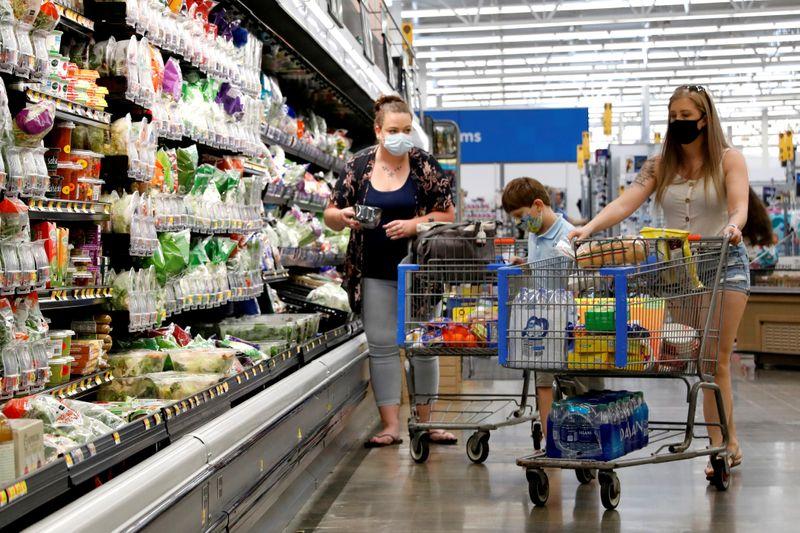 WASHINGTON (Reuters) - U.S. consumer sentiment increased in early September, with Democrats more upbeat about the economy's outlook compared to Republicans ahead of the Nov. 3 presidential election.

The survey from the University of Michigan on Friday, however, showed President Donald Trump, a Republican, and his Democratic Party challenger, former Vice President Joe Biden, in "a virtual tie" when assessing consumers' responses between July and September on which candidate they thought would win the election, not whom they favored or how they intended to vote.

"The September gains were primarily in the outlook for the economy, and it was Democrats that posted gains in economic prospects while optimism about the economy weakened among Republicans," the University of Michigan Surveys of Consumers chief economist Richard Curtin said in a statement.

The University of Michigan's consumer sentiment index rose to 78.9 in the first half of this month from a final reading of 74.1 in August. The index remains 22.1 points below February's level. Economists polled by Reuters had forecast the index edging up to a reading of 75 in early September.

Though consumers believed Trump would be better for the economy, 40% did not expect either candidate would have an impact on their personal finances.

The improvement in sentiment is welcome amid signs that the economic recovery from the COVID-19 recession is stalling, with nearly 30 million people on unemployment benefits six months after the pandemic started in the United States. Retail sales and production at factories slowed in August.

The moderation in activity comes as government money to help businesses pay wages and the unemployed get by is running out. That was underscored by a separate report from the Conference Board on Friday showing its measure of future U.S. economic growth increased 1.2% in August after advancing 2.0% in July.

The Conference Board said last month's small gain in the leading economic index "suggests that this summer's economic rebound may be losing steam heading into the final stretch of 2020."

Stocks on Wall Street were trading lower. The dollar slipped against a basket of currencies. U.S. Treasury prices were mixed.

"In the absence of another round of fiscal support, consumers attitudes will remain more cautious, which could restrain spending and the pace of the recovery going forward," said Rubeela Farooqi, chief U.S. economist at High Frequency Economics in White Plains, New York.

A third report from the Commerce Department on Friday showed the current account deficit soared to its highest level in nearly 12 years in the second quarter as the COVID-19 pandemic weighed on the export of goods and services, offsetting a shrinking import bill.

The current account deficit, which measures the flow of goods, services and investments into and out of the country, jumped 52.9% to $170.5 billion last quarter. That was the biggest gap since the third quarter of 2008 when the economy was working its way through the Great Recession.

Data for the first quarter was revised to show a $111.5 billion shortfall, instead of $104.2 billion as previously reported. Economists had forecast the current account gap increasing to $157.9 billion in the second quarter.

The current account gap represented 3.5% of gross domestic product in the April-June quarter, the biggest share since the fourth quarter of 2008.

The Commerce Department's Bureau of Economic Analysis, which compiles the data, said the decline in transactions resulted "in part from the impact of COVID-19, as many businesses were operating at limited capacity or ceased operations completely, and the movement of travelers across borders was restricted."

"While more recent data already show a firm pick-up in trade, the scale of the drop means it will take some time for a full recovery," said James Watson, a senior economist at Oxford Economics in New York.

In the second quarter, exports of goods and services dropped to $444.7 billion, the lowest since the first quarter of 2010, from $605.6 billion in the January-March period. There were sharp declines in the export of petroleum, civilian aircraft and motor vehicles and engines.

Imports of goods and services dropped to $609.6 billion, the lowest level since the third quarter of 2010, from $732.0 billion in the first quarter. The decline mostly reflected decreases in imports of motor vehicles, parts and engines, as well as petroleum.

The amount of money leaving the country also fell last quarter, with declines in interest on loans and deposits. Private sector fines and penalties, as well as government transfers like international aid also declined last quarter.