By Rajesh Kumar Singh CHICAGO (Reuters) - Deere & Co's shares hit an all-time high on Friday after the company lifted its full-year earnings forecast and posted a much smaller-than-expected decline in quarterly profit, on the back of replacement demand and higher adoption rates for precision agriculture technology. 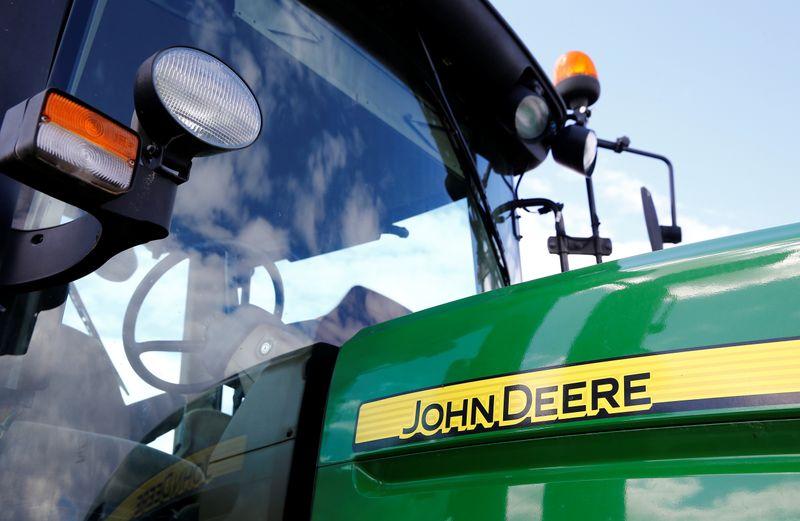 The world's largest farm equipment maker said it now expects net income of about $2.25 billion for the full year, higher than the earlier estimate of $1.6 billion to $2 billion. Operating cash flow for the year is estimated to be $2.8 billion, up from the $1.9 billion to $2.3 billion projected in May.

Deere said the lingering economic uncertainty is also driving farmers to invest in technology to reduce their costs and enhance productivity. Sales of the company's planters and sprayers under the early order program were higher this year from a year ago.

"We see significant levels of investment in solutions that have the highest demonstrable impact on improved customer economics," Cory Reed, president of Deere's production and precision ag division, told analysts on an earnings call.

However, demand for large farm machines is expected to be down from last year.

The Moline, Illinois-based company said it will restart share repurchases that were stopped in mid-March even as it plans to hold additional liquidity for an indefinite period to deal with business uncertainty.

In response to the coronavirus fallout and a prolonged slump in the U.S. farm economy, agriculture equipment makers including Deere have cut production to prevent a supply glut and have kept a lid on costs.

This has tightened supplies and driven inventories to below the 10-year average, allowing companies to protect their pricing power. That along with cost cuts helped Deere, in the latest quarter, cushion the impact of lower sales on its profit.

Quarterly profit came in at $2.57 per share. Equipment sales fell 12.4% on a year-on-year basis, nearly half the pace expected by Wall Street, to $7.9 billion.