By Silvia Aloisi DAVOS (Reuters) - The International Monetary Fund has cut its global growth forecasts for the second time in three months. 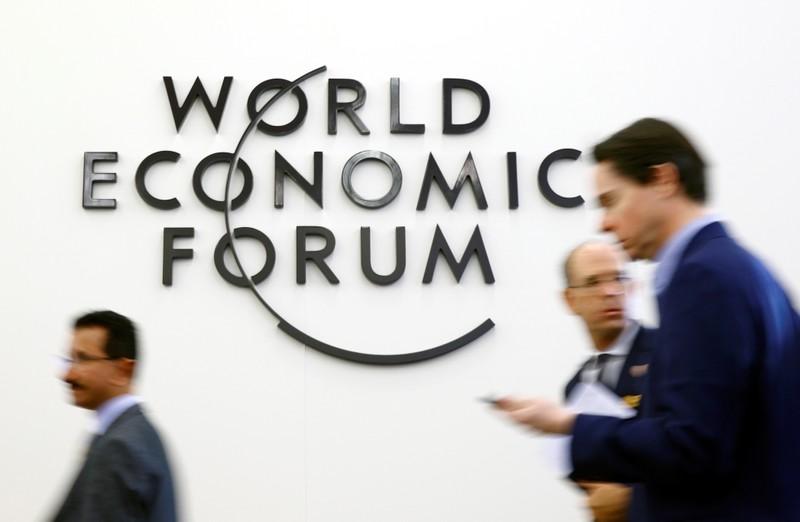 DAVOS (Reuters) - The International Monetary Fund has cut its global growth forecasts for the second time in three months. Central banks in the U.S. and Europe are reversing a decade of ultra-loose monetary policy. Trade tensions between Washington and Beijing are hurting investor sentiment worldwide.

And a flurry of crises, from Brexit to the U.S. government shutdown, are keeping top world leaders away from Davos as they have more urgent problems to solve at home.

No wonder the mood at the World Economic Forum this year is decidedly somber, in striking contrast to the widespread optimism that dominated the annual Alpine meeting of the rich and powerful just 12 months ago.

"Going back a year or so there was abnormally large positivity as we went into the year. It's amazing how a year later that barometer has definitely taken two or three nudges down," Standard Chartered's Chief Financial Officer Andy Halford told Reuters in an interview.

Ray Dalio, founder and chairman of Bridgewater Associates, the world's largest hedge fund, offered a particularly dark view of the global outlook, saying the current climate bears a striking resemblance to market conditions during the final years of the Great Depression in the late 1930s.

"We will be in a slowing economic environment. Europe, the U.S., China - all of those will be experiencing a period of slowing," he said.

"What scares me the most longer term is that we have limitations to monetary policy, which is our most valuable tool, at the same time as we have a greater political and social antagonism. The next downturn in the economy worries me the most," he said.

Jes Staley, the chief executive of Barclays, said the general consensus had turned from "excessive optimism to heavy concern," pointing to the rise of geopolitical uncertainty and the reversal of monetary easing as the two main worries on people's minds.

"The U.S.-China issues, the UK-Europe issues, all this political uncertainty...It seems as if the centre is holding together less politically than what we had in the past," he told Reuters TV.

But among the overarching gloom and doom, financial leaders were putting on a brave face and trying to see the glass half-full.

Citigroup Chief Executive Michael Corbat said market fears about an escalation of the trade dispute between the United States and China might be overdone.

"We actually published a piece this morning saying that there is a potential surprise to the upside around getting to a trade deal that might be better than people expect," he told Reuters.

U.S. President Donald Trump has vowed to increase tariffs on $200 billion worth of Chinese imports on March 2 if China fails to address intellectual property theft, forced technology transfers and other non-tariff barriers.

His Secretary of State, Mike Pompeo, voiced optimism on Tuesday for a good outcome in upcoming trade talks with China and said a superpower conflict between the two nations could be avoided.

Corbat said the market sell-off at the end of 2018 was disconnected from the empirical evidence in the United States and economies around the world.

"Going into the new year, we have seen a pretty significant rebound in various sectors... You've seen earnings coming out, and of the companies that have reported so far over 75 percent are above analyst consensus," he said.

"I think you are seeing people now potentially moderating from recessionary fears to slowdown, (trying to understand) what's that slowdown going to look and feel like," he said.

Standard Chartered's Halford said the Chinese economy was slowing in part because of the trade tensions but still growing at a pace that would make most other countries "truly envious".

"Overall, if you look at the profitability of businesses globally they are still by historical standards going pretty well, and generally speaking consumption patterns around the world are still holding up," he said.