CCI gets complaint against Flipkart, other e-retailers

New Delhi: Fair trade regulator CCI has received a complaint against online retailers including home-grown giant Flipkart for alleged unfair business practices and will soon take a call on probing the matter.

The complaint has been received against these online trading entities weeks after an uproar over Flipkart's massive discount sale which had raised concerns of anti-competitive practices. 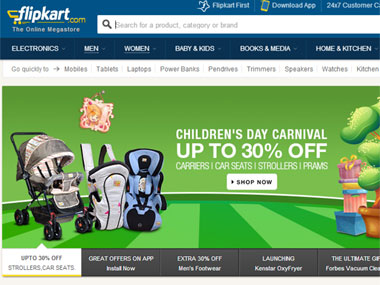 A senior official said that the Competition Commission of India (CCI) has received a complaint against online trading companies, including Flipkart, and a decision would be taken soon on whether the matter should be probed further.

The government had also said last month that it will look into the concerns and take a call on whether more clarity is required on e-commerce retail business, after concerns were raised about sale exercises undetaken by Flipkart and others.

Flipkart's 'Big Billion Day' sale on 6 October, that offered steep discounts on various products, had raised concerns among small and big traders that such campaigns would badly affect players in the traditional retail market.

"We have received many inputs. Lot of concerns have been expressed. We will look into it," Commerce and Industry Minister Nirmala Sitharaman had said at that time.

In recent times, many e-commerce portals have been coming out with steep discount sales.

Flipkart had said that its 'Big Bilion Day' sale saw 1.5 million people shopping at its portal. It also claimed that products worth over Rs 600 crore were sold in just 10 hours under the scheme.

Among others, traders body CAIT had demanded the Commerce and Industry Ministry take steps to monitor and regulate online businesses.

The Confederation of All India Traders had also sought a probe into the business model and trade practices of e-commerce companies to find out how they are offering huge discounts during the ongoing festive season.