By Alexis Akwagyiram and Chijioke Ohuocha LAGOS/ABUJA (Reuters) - Civil servant Amos Dam is frustrated after waiting two hours to enter a bank in Nigeria's capital Abuja. He is one of about 20 people sitting on plastic chairs under a canopy to protect them from the sun on a pavement between a busy road and the bank. 'It has become much more tedious trying to carry out any transactions in the bank,' said Dam, referring to the impact of social distancing measures reducing numbers inside branches to halt the spread of the new coronavirus. 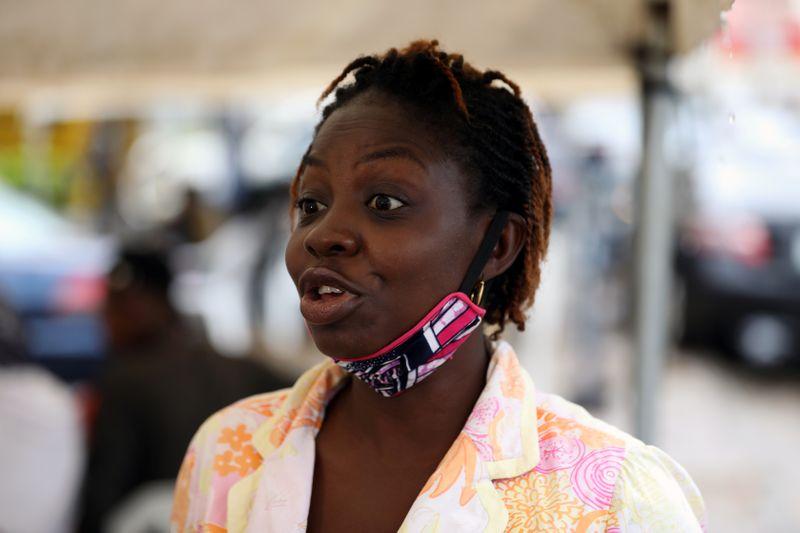 LAGOS/ABUJA (Reuters) - Civil servant Amos Dam is frustrated after waiting two hours to enter a bank in Nigeria's capital Abuja. He is one of about 20 people sitting on plastic chairs under a canopy to protect them from the sun on a pavement between a busy road and the bank.

"It has become much more tedious trying to carry out any transactions in the bank," said Dam, referring to the impact of social distancing measures reducing numbers inside branches to halt the spread of the new coronavirus.

The pandemic has increased the use of digital banking services in Nigeria where restrictions on the amount of dollars that can be withdrawn have also contributed to long waiting times since some people require multiple trips to get foreign currency.

A new breed of digital banks, without physical branches, say they have had a boost due to the pandemic.

Kuda Bank, a digital only bank launched in August 2019 with 500 customers, said it tripled its daily adoption of customers in a trend that began during lockdown in Nigeria's main cities - Lagos and Abuja - from late March until early May.

The bank's chief executive officer Babs Ogundeyi said it had taken on around 3,000 customers a day from April, compared with just under 1,000 a day before.

"We expect the growth to remain," said Ogundeyi, adding the pandemic forced many to overcome concerns about the safety of online transactions in a culture where a fear of financial internet scams has made people wary of abandoning cash.

Uzoma Dozie, CEO of Sparkle, a digital bank launched in June 2019, said the digital only business model was more cost-effective.

"Seeing the impact of COVID and the fact that we might see a second wave or other pandemics tells us that we need to build resilience into our businesses, and that means being digital," he said.

He said, however, the lenders collaborated with "bricks and mortar" banks for the use of cash machines.

Local bank Fidelity said 87% of transactions in the second quarter of this year were made on its digital platforms, compared with 82% in the whole of 2019.

Peter Mushangwe, a banking analyst at ratings agency Moody's, said Nigerian banks were "pursuing digitalization quite vigorously" in a bid to attract more deposits to increase the proportion of their income from fees as income from interest makes up around 70% of their total income.

Outside the bank in Abuja, breathing in traffic fumes, Dam said he was there because an electronic cash dispenser failed to provide cash but his account had been debited.

He said he preferred using banking apps but that wasn't stress-free due to poor internet connectivity.

"When the bank network is bad ... one transaction could take you the whole day," he said.