By Stephen Nellis (Reuters) -Qualcomm Inc, the world's biggest supplier of mobile phone chips, said on Tuesday it had named its president and chip division head Cristiano Amon as its new chief executive. Amon, who has been with the San Diego-based company since 1995 and became president in 2018, will replace outgoing CEO Steven Mollenkopf, effective June 30. 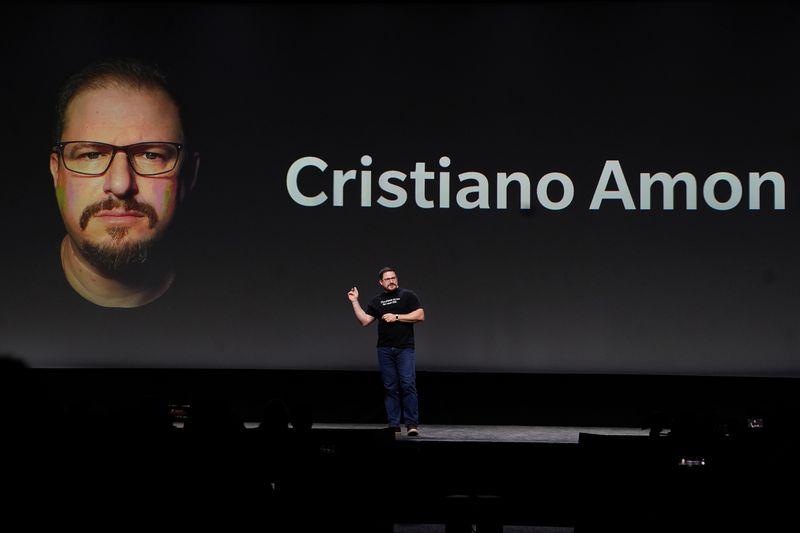 (Reuters) -Qualcomm Inc, the world's biggest supplier of mobile phone chips, said on Tuesday it had named its president and chip division head Cristiano Amon as its new chief executive.

Amon, who has been with the San Diego-based company since 1995 and became president in 2018, will replace outgoing CEO Steven Mollenkopf, effective June 30.

In recent years Amon has overseen the company's chip division, which supplies processors to most Android phones and modem chips that help Android devices and Apple Inc's iPhones connect to wireless data networks.

A strong proponent of 5G, the new generation of faster wireless networks, he has led Qualcomm's push to put 5G chips into low and mid-priced handsets. He has also guided the company's expansion into new areas such as 5G infrastructure equipment, automotive computers and personal computers.

"We have been at the forefront of innovation for decades and I look forward to maintaining this position going forward," said the 50-year-old, a native of Brazil who restores vintage muscle cars in his spare time.

But Amon, who also played a role in Qualcomm's licensing division as company president, will face some tough challenges as CEO, such as how to deal with Qualcomm's heavy reliance on intellectual property from Arm Ltd for its processor chips.

Arm is in the middle of a $40 billion takeover by Nvidia Corp, which has a brewing rivalry with Qualcomm in chips for artificial intelligence.

Amon could be forced to find a replacement for Arm's intellectual property if Qualcomm concludes that depending on a competitor creates too much long-term risk.

Qualcomm has already started using more of its own intellectual property in chips for artificial intelligence and is using an Arm alternative called RISC-V in certain parts of its phone processors.

Qualcomm designs chips but outsources their manufacturing, largely to Taiwan Semiconductor Manufacturing Co in Taiwan and Samsung Electronics Co Ltd in Korea. U.S. lawmakers recently approved a program to bolster domestic semiconductor manufacturing. Amon said Qualcomm, which has huge sway with chip factories because of its sales volume, plans to retain its outsourcing strategy but would consider future U.S. factories.

"We're one of the few companies that actually have multi-sourcing on the leading node. And we expect to be that way," he told reporters during a press conference. "We actually look very favorably on more foundry investment, including in the United States. That's very good for Qualcomm and very good for the industry."

The current CEO, Mollenkopf, is himself no stranger to challenges, having guided Qualcomm through three crises: A hostile takeover attempt by Broadcom Inc, an antitrust challenge by the U.S. Federal Trade Commission and a protracted legal battle with Apple.

Qualcomm prevailed in all three cases, and the 52-year-old, who has been with the company for 26 years, leaves with its shares riding at nearly three times their value during the depth of the crises.

"Steve navigated through unprecedented circumstances during his tenure, facing more in his seven years as CEO than most leaders face in their entire careers," said Mark McLaughlin, chair of Qualcomm's board.

Mollenkopf will remain with Qualcomm as an adviser for a period of time, the company said.

(Reporting by Munsif Vengattil in Bengaluru and Stephen Nellis in San Francisco; Editing by Pravin Char and Lisa Shumaker)