China's builders are hurting - Beijing may feel the pain

By Brenda Goh NANTONG, China (Reuters) - Cai Zhonghui has worked in China's construction industry all his adult life, graduating from a labourer to owning a company with 100 workers building factories and roads around eastern China. 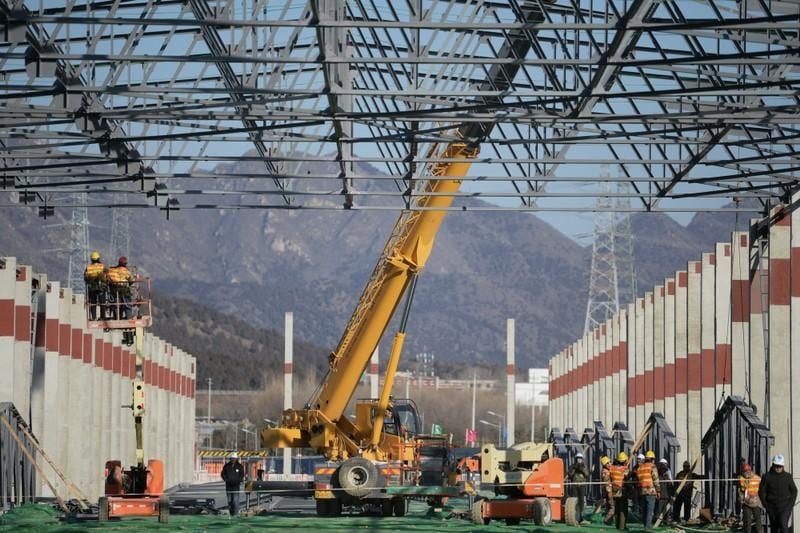 NANTONG, China (Reuters) - Cai Zhonghui has worked in China's construction industry all his adult life, graduating from a labourer to owning a company with 100 workers building factories and roads around eastern China.

Cai says the industry is now facing the toughest challenges he has seen, squeezed by high materials costs, tougher regulations and tighter access to credit, making him cautious about taking on new projects.

That caution reflects a broader threat to Beijing as it looks to stimulate a slowing economy with increased infrastructure approvals: private builders – the backbone of the sector - are less willing to take projects on due to higher risks and lower profits.

"In the past, once there was an opportunity, we would rush to grab the work. But now we're more choosy: Are we able to undertake it? Do we really want to do this? We want to lower our risks," Cai, a wiry and sprightly 63-year-old, told Reuters at his office in the eastern Chinese city of Nantong.

The builders' concerns come at a time when China's broader infrastructure and property industry, a key driver of its economy, is in flux.

While investment as a proportion of China's economy has been trending down as services and consumption rise, it still contributed to about one-third of the country's economic growth last year.

China poured billions of dollars into building roads, rail-lines and other infrastructure to prop up the economy during the global financial crisis in 2008 and has routinely returned to use it as a driver of growth. However, analysts say that its effectiveness has been increasingly dulled with rising debt risks and inefficient projects.

Beijing began tightening approvals for infrastructure projects last year and ordered an overhaul of its public-private partnerships programme as part of its efforts to tackle debt risks.

Infrastructure spending growth slowed to 3.7 percent in November, near its lowest level in two decades, from levels of over 20 percent last year.

And downward pressure on the economy is increasing, China's statistics bureau said on Friday.

Larger listed builders are feeling the pinch. A Reuters analysis of the earnings of 82 listed Chinese construction and engineering firms found total debt grew at its slowest rate in at least six years between July to September, illustrating the difficulties they face in obtaining financing.

These companies include Jiangsu Zhongnan Construction Group <000961.SZ>, which saw its total debt contract by just over 10 percent over the period. Like a large number of Chinese companies, its controlling shareholder has in recent months been pledging its shares to finance firms to raise cash.

Meanwhile, third-quarter revenues rose at their lowest pace in six quarters, underlining the pressure on sales.

State-owned giants such as China Communications Construction Corp <601800.SS> <1800.HK> and China State Construction Engineering Corp <601668.SS> build the country's largest projects but work also filters down to private firms, which make up about 90 percent of China's 86,000 construction firms, according to the China Construction Industry Association.

Adding to those strains are China's effort to clean up the environment, which builders say has pressured some materials producers to shut plants and others to stop work when pollution levels are high, curbing output and pushing up prices.

Prices of materials, which can account for about 60 percent of a building's cost, have risen 29 percent between the first quarter of 2016 to the third quarter this year, according to Joe Chan, Head of China East at consultancy Arcadis.

Cement production, for example, has dipped, driving Chinese firms to start importing from places like Vietnam which saw cement exports to China jump by over half this year.

"The situation is new for the cement industry for China," said Raluca Cercel, an associate at consultancy CW Group, who estimates average cement prices have risen to over $50 a tonne from less than $30 a tonne in 2016. "Supply is definitely declining faster than demand is."

"Now the cement companies are choosing who they want to supply to," he told Reuters. "This has meant that our work can't progress on schedule, which causes delivery problems which in turn can become a liquidity issue."

The government is taking steps to mitigate these pressures.

Since July, it has restarted greenlighting a number of large railway and airport projects as a trade war with the United States threaten to trigger a sharper slowdown.

Beijing has also said it will relax restrictions to allow local governments to sell special bonds to pay for projects and has pledged more financing support to cash-strapped firms.

The National Development and Reform Commission did not respond to a request for comment.

However, industry insiders said they believe the pressures will last for at least another year and any funding from the Beijing will take some time to filter down to smaller firms. State firms, which tend to have easier access to capital, will likely shoulder the lion's share of the work in the meantime.

Cai, for instance, is now looking elsewhere for profits. He has set up a separate company to trade construction materials, taking advantage of ties he has with cement suppliers and the high prices.

"Trading is still risky," he said. "However it saves on labour and is less troublesome."