By Tom Polansek CHICAGO (Reuters) - The U.S.-China trade war is spooking potential investors in soybean crushing plants planned for Wisconsin and New York state, developers said, casting doubt on the future of a sector that had been a rare bright spot in the U.S. farm economy. Crushers in the United States have been posting near-record profits by snapping up cheap and plentiful soybeans no longer purchased by China and making soymeal and soyoil for export to Europe and Southeast Asia 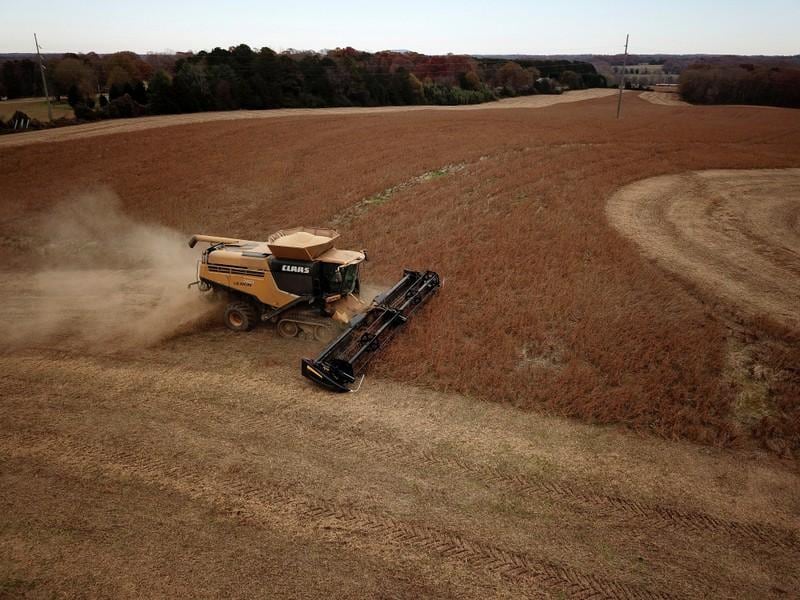 CHICAGO (Reuters) - The U.S.-China trade war is spooking potential investors in soybean crushing plants planned for Wisconsin and New York state, developers said, casting doubt on the future of a sector that had been a rare bright spot in the U.S. farm economy.

Crushers in the United States have been posting near-record profits by snapping up cheap and plentiful soybeans no longer purchased by China and making soymeal and soyoil for export to Europe and Southeast Asia.

But margins are not predictable as the United States and China attempt to resolve their trade differences before a March 2 deadline, adding another puzzle as investors parse out the costs and impacts of a trade dispute between the world's two largest economies.

WSBCP LLC, or the Wisconsin Soybean Crushing Plant, is struggling to find backers for the state's first soy processing facility because of uncertainty in agricultural and financial markets over the trade conflict, said Phil Martini, chief executive of industrial contractor C.R. Meyer & Sons Co, who is overseeing the project.

"I'm not a mental giant, but it doesn't take one to think people are uncertain about what's going on," Martini said.

"The crush margin is very good but it can go the other way."

China bought about 60 percent of U.S. raw soybean exports last year in deals worth $12 billion, but has mostly been buying beans from Brazil since imposing a 25 percent tariff on American soybeans in July in retaliation for U.S. tariffs on Chinese goods.

U.S. President Donald Trump and his Chinese Counterpart Xi Jinping agreed on Dec. 1 not to impose additional tariffs for 90 days, a truce that spurred Chinese purchases of a few million tonnes of U.S. soybeans this month.

It is unclear when or if Beijing will remove its soy tariff, a move that would spur more deals and lift U.S. soybean prices in a boon to U.S. farmers and a blow to crushing margins.

Construction on the $150 million plant in Waupun, Wisconsin, is set to begin in 2019, with a projected opening in 2020, according to a June statement from the city, which owns the land where the facility would be located.

Martini said it remains to be seen whether the timetable needs to be postponed. He is also looking for livestock producers to commit to buying the plant's products.

Kathy Schlieve, Waupun's economic director, said the project would likely be delayed because the investor pool is not finalised.

"It's different dynamic and we're really trying to understand that," Schlieve said about the trade war.

The uncertainty is a turnaround from last year when farmer-owned agricultural cooperatives were building new soybean crushing plants at the fastest rate in two decades after several years of large crops.

But after months of soybean futures prices

"There isn't a lot of extra money out there to invest in something like that," said John Heisdorffer, an Iowa farmer and chairman of the American Soybean Association.

The trade war also prolonged the search for investors for a $54 million soybean crushing plant that St. Lawrence Soyway Company is planning for Massena, New York, near the border with Canada, CEO Doug Fisher said.

Fisher tried to win over investors worried by the trade war with charts and graphs showing how the conflict improved margins for U.S. crushing plants.

"These tariffs with China rattle them, when in fact they have increased crush plant profits," Fisher said.

As of Wednesday, the company had raised about 85 percent of the total, Fisher said.

St. Lawrence Soyway's plant is projected to process soybeans into feed for dairy cows. The livestock industry has also been hit by Chinese tariffs on dairy products and pork, though.

"As those farmers are not doing as well, their ability to buy meal at higher prices is not there," Fisher said.