By David Lawder and Makini Brice WASHINGTON (Reuters) - Chinese Ambassador to the United States Cui Tiankai said on Tuesday that Beijing was ready to resume trade talks with Washington, but blamed the U.S. side for frequently 'changing its mind' on tentative deals to end U.S.-China trade disputes 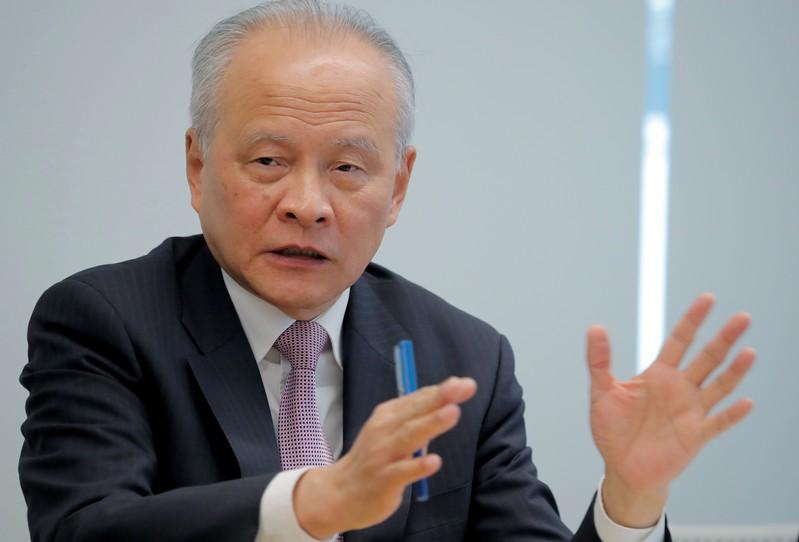 By David Lawder and Makini Brice

WASHINGTON (Reuters) - Chinese Ambassador to the United States Cui Tiankai said on Tuesday that Beijing was ready to resume trade talks with Washington, but blamed the U.S. side for frequently "changing its mind" on tentative deals to end U.S.-China trade disputes.

"China remains ready to continue our talks with our American colleagues to reach a conclusion. Our door is still open," Cui said in an interview on Fox News Channel.

No further trade talks between top Chinese and U.S. negotiators have been scheduled since the last round ended in a stalemate on May 10, the same day U.S. President Donald Trump sharply increased tariffs on $200 billion worth of Chinese goods and took steps to levy duties on all remaining Chinese imports.

Negotiations between the United States and China have soured dramatically since early May, when Chinese officials sought major changes to the text of a proposed deal that the Trump administration says had been largely agreed.

Asked about this reversal, Cui turned the tables and said it was U.S. negotiators that had abruptly backed away from some previous deals that had been tentatively agreed over the past year.

In June 2018, U.S. Commerce Secretary Wilbur Ross held negotiations with Chinese Vice Premier Liu He on an offer by China to increase its purchases of U.S. goods by around $70 billion, U.S. officials said at the time. But U.S. President Donald Trump did not accept the offer, choosing instead to begin imposing tariffs on Chinese goods.

The United States is seeking sweeping changes to China's trade and economic policies, including an end to forced technology transfers and theft of U.S. trade secrets. Washington also wants curbs on subsidies for Chinese state-owned enterprises and increased access to U.S. markets.

"Everybody knows Huawei is a privately owned company. It is just a normal Chinese private company," Cui said. "So all the action taken against Huawei are politically motivated."