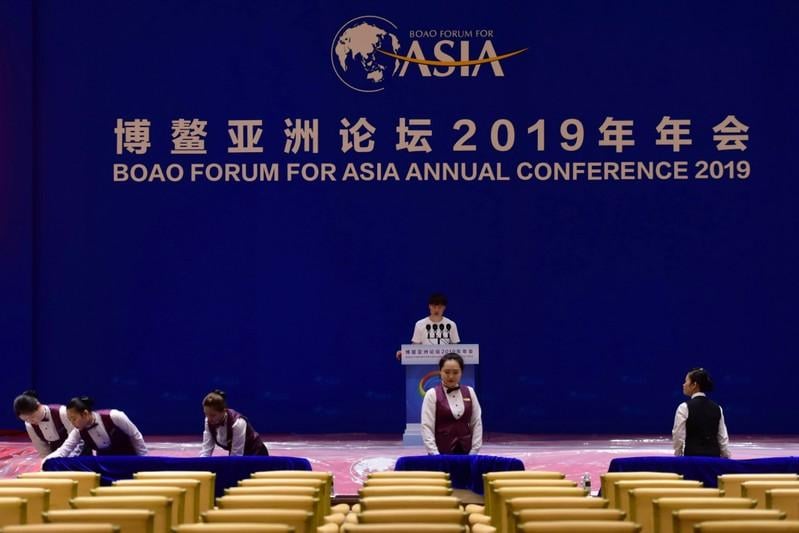 By Kevin Yao and Dominique Patton

The government will also work on more favorable policies for foreign investors to trade Chinese bonds, Li said in a speech at the annual Boao forum held on China's southern island of Hainan.

"We are quickening the full opening of market access for foreign investors in banking, securities and insurance sectors," he said.

Li's remarks add to speculation that China may soon announce new rules that will allow foreign banks and insurance firms to increase their presence in China.

China has pledged to further open its massive financial markets to foreign investors since last year amid a trade war with the United States. Foreign businesses have long complained that liberalisation has been too narrow and implementation spotty.

Sources told Reuters on Wednesday that the United States and China have made progress in all areas under discussion in trade talks, with unprecedented movement on the touchy issue of forced technology transfers as China had put proposals on the table that went further than in the past, but sticking points remain.

Li said the business scope of foreign banks, as well as market access for credit rating companies, bank card settlements and non-bank card payments, will all be "expanded sharply", with restrictions on the scope of foreign securities companies and insurance brokers expected to be removed.

"Such measures will be implemented this year in a relatively forceful way," he said.

Li said China will also announce policies to help foreign investors to invest in and trade China's bonds, just before Chinese bonds' inclusion in the Bloomberg Barclays Global Aggregate Index, one of the most widely tracked in the world, scheduled to start on Monday.

But global investors' access to hedging instruments continues to be restricted, and clarification on tax collection policy is needed, ASIFMA, a financial industry lobby, noted in a report last week.

Li said China will also issue more favorable rules for foreign acquisitions of Chinese listed firms. Beijing is drafting rules related to a new foreign investment law that was passed earlier this month. The rules are expected to be completed this year.

Beijing will revise and shorten a "negative" list of areas where foreign investment is restricted, and will publish it before the end of June, Li said.

NO TRUST DEFICIT WITH U.S.

In a meeting with foreign and Chinese business executives on Thursday afternoon, the premier said he doesn't think there is a deficit of trust between China and the United States.

"We need to prevent a trust deficit from occurring - otherwise the damage it could do to U.S.-China relations is incalculable," said Li, adding that trade frictions remain a sticky point.

China must protect intellectual property, otherwise there is no hope for the nation's transformation, Li said.

U.S. Trade Representative Robert Lighthizer and Treasury Secretary Steven Mnuchin arrived in Beijing on Thursday and are scheduled to have a working dinner with Vice Premier Liu He.

Talks are expected to last for a full day on Friday.

Li said China will cut "real interest rate levels" and lower financing costs for Chinese companies, but did not elaborate on which interest rate he was referring to. Li had made similar comments in a speech earlier this month.

Positive changes in China's economy in March exceeded the government's expectations, he said.

China's industrial firms posted their worst slump in profits since late 2011 in the first two months of this year amid slowing demand at home and abroad.

Analysts at Capital Economics said they believe the benchmark lending rate will be cut in the weeks ahead, though sources have told Reuters such a move may be a last resort if the economy does not show signs of responding to previous support measures.

Other China watchers say policymakers may be waiting for March and first-quarter data in mid-April for a better picture of whether conditions are starting to stabilize, and how much additional policy easing may be needed.

Li said he could not rule out the possibility that there would be some fluctuations in the world's second-largest economy this year, but added that earlier policy steps were gaining traction.

However, Chinese policymakers, including Li, have stressed that Beijing would not resort to "flood-like" stimulus that would unleash huge amounts of cheap credit, out of concern that could add to a mountain of debt.

The central bank has not cut benchmark rates since the last downturn in 2015, but it has been guiding financing costs lower since last year through various means including liquidity injections.

China's economic growth cooled to 6.6 percent last year, the slowest pace in nearly 30 years, and analysts polled by Reuters expect a further pullback to 6.3 percent in 2019.