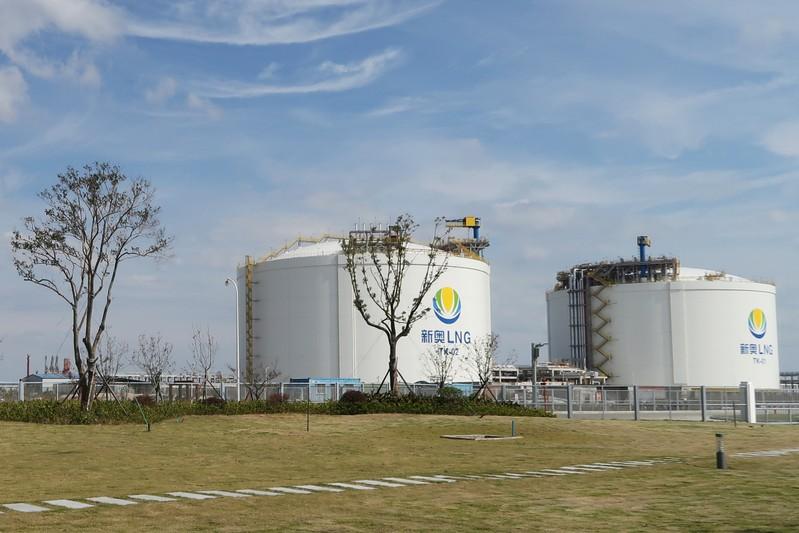 By Meng Meng and Dominique Patton

BEIJING (Reuters) - Industrial gas demand in North China is showing signs of a sharp slowdown as small manufacturers shut their doors or buy less gas, unable to cope with a drop-off in export orders and costs related to Beijing's pollution control and reform measures.

The contract talks come only six months after the deals were done with CNOOC. The unexpected fall-off in demand from hundreds of small factories from a key industrial region could end up forcing Asian LNG spot prices even lower.

"The manufacturing sector and other small industrial producers have shrunk after a year-long crusade targeting their emissions, as well as supply-side reform, leading to weakness in industrial consumption of gas," said Wang Haohao, an analyst at energy consultancy Longzhong.

A manager at one of the top dealers taking supplies from CNOOC's terminal in Tianjin said he booked less than half the gas to be delivered in October than he did in May because of the weaker demand from his customers.

The dealer is likely to pay a hefty penalty at the end of the year for not taking agreed volumes from CNOOC, said the manager, who asked not to be named.

Among the manufacturers buying less gas this year is a ceramics factory in Yilin in Shandong province. The factory's owner said he has already halted one of three production lines and plans to lay off 500 workers.

Gai said he is facing his toughest year in 20 years of business, blaming Beijing's campaign to switch users from coal to gas - which makes gas prices volatile - falling export orders, and frequent forced shutdowns in response to heavy smog.

A manager at a national gas dealer said his firm has been losing at least 100 yuan per tonne of LNG sold into the spot market since Oct. 10, after agreeing in March to buy more than 200,000 tonnes of gas from CNOOC a year at fixed monthly prices.

His customers include chicken farms, steel mills and plastic tool factories across central and eastern China.

October prices with CNOOC had been agreed at 4,660 yuan a tonne but spot prices are currently at 4,440 yuan, according to a daily wholesale LNG price index for China, produced by industry publication http://www.yeslng.com

The national dealer trucks LNG from CNOOC's Tianjin import terminal to commercial customers beyond the reach of pipelines.

About 8.2 million tonnes of LNG were delivered this way to industrial users in China last year, according to analyst Wang, about 20 percent of the nation's total LNG imports.

Nearly two-thirds of the LNG tanks that store the fuel for small factories in eastern Shandong province, the country's industrial heartland, have been abandoned after local gas distributors received fewer orders from end-users, Wang said.

Reuters has not been able to independently confirm the shut down of these LNG storage tanks.

The drop-off in local demand poses a potential headache for CNOOC, which operates a 2.2 million-tonnes-per-year LNG import facility at Tianjin.

Following last year's cold winter and gasification programme in which millions of households and factories were moved from coal to gas, CNOOC has been busy this year filling new storage tanks.

And to be sure, overall gas demand in China is still rising, as cities switch from dirty coal to clean-burning gas to fuel winter heating in homes.

But as industrial demand slips and forecasts indicate a mild winter, this could leave CNOOC and other LNG importers stuck with excess supply and unable to offload more import cargoes.

Lacklustre demand from China's import terminals would in turn likely put more pressure on Asia's spot LNG market, where prices are already down by more than 11 percent from their 2018 peak in June, amid plentiful supplies and the expectations of a warmer winter across North Asia.

CNOOC Gas and Power Group, which operates the Tianjin terminal, did not respond to a request for comment.