St. Louis (Reuters) - Tight U.S. labor markets could bring unemployment rates for blacks and Hispanics more in line with that of whites, another reason for the Federal Reserve to stop raising interest rates, St. 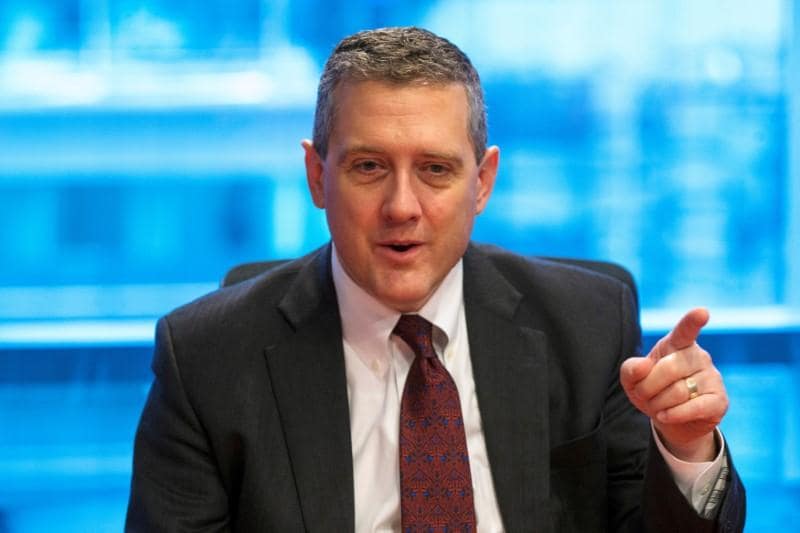 "Unemployment is at a low level, but you also have African American unemployment, Hispanic unemployment," still one to two percentage points greater than the national average, Bullard said. "You could get those unemployment rates down, more consistent with the rest of the society."

Bullard's comments address a central puzzle faced by the Fed as it debates how much further to raise interest rates during a continued economic expansion.

Unemployment at 3.8 percent is below what Fed officials consider "full employment," and is projected to drop. While positive for workers, that has posed a dilemma for central bankers whose core economic model would imply that inflation should take off with the labor market at capacity and the economy growing above potential.

Fed Chairman Jerome Powell at his quarterly press conference earlier this month endorsed that view of the world, saying the Fed's plan for continued gradual rate increases was a way "to navigate between two risks...One would be moving too quickly - inflation never gets back to target if we do that. And the other is moving too slowly, and then we have too much inflation."

Yet Bullard - restating a point often raised under former Chair Janet Yellen - said that with no acceleration in inflation anywhere in sight, the Fed should err on the side of letting labor markets continue to improve.

"I am an inflation hawk...but we are not in that situation right now," he told reporters at an investment conference here. "To say that because you are going to get to a low unemployment level inflation is going to explode, there is no evidence for that."

While many policymakers continue to assume inflation will reappear if unemployment falls low enough, economists are also looking for evidence that it may not.

Bullard, for example, has suggested that central banks have been so effective at setting inflation expectations, unemployment could dive even lower without higher inflation - possibly to the benefit of racial and ethnic groups that suffer higher unemployment.

The national unemployment rate is 3.8 percent, but it is lower for whites at 3.5 percent, and higher for blacks at 5.9 percent and Hispanics at 4.9 percent.