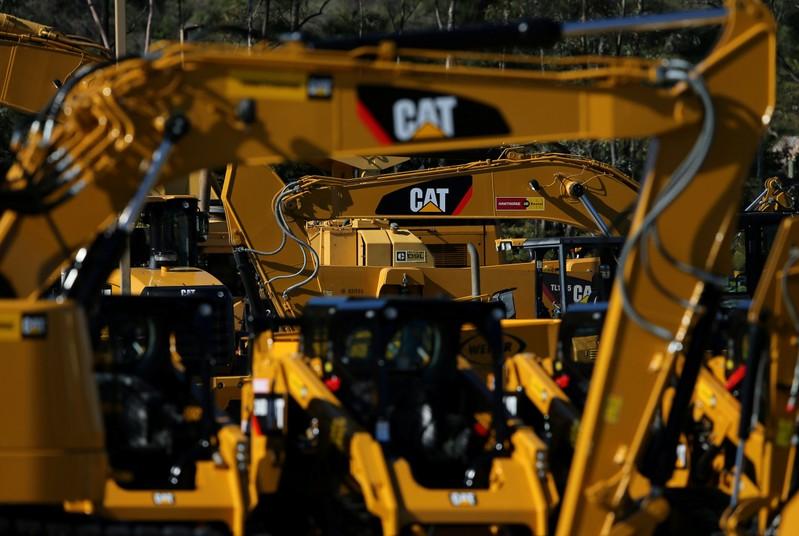 Industrial bellwether Caterpillar now expects construction equipment sales in China, the world's second-largest economy, to be flat this year. China, which accounts for up to 10 percent of company sales, last week reported its slowest economic growth in nearly three decades.

Caterpillar posted a decline in construction equipment sales in the Asia-Pacific region in the latest quarter due to the cooling China demand.

Since China is one of the world's largest commodities importers, its slowing economy is having a ripple effect on global commodities prices, which can also hurt the company's equipment sales in the mining and oil and gas industry, for example.

Caterpillar downplayed the slump in China, citing a "very strong" performance a year ago, but did not break out sales. Chinese construction demand was up 40 percent in 2018 after doubling in 2017.

Caterpillar forecast 2019 adjusted profit of $11.75 to $12.75 per share, compared with the average analyst estimate of $12.73, according to IBES data from Refinitiv. Sales for the year are expected to increase modestly.

Chief Financial Officer Andrew Bonfield said profits this year will be weighed down by a higher U.S. tax rate and increased freight and material costs.

"We expect favourable price realization to be mostly offset by cost headwinds," he told analysts on a conference call.

Caterpillar, a proxy for global economic activity, benefited in the past year from what the International Monetary Fund called the strongest global growth surge since 2010.

However, a tariff war between the United States and trade partners including China has stoked fears of a global slowdown.

The tariffs cost the company over $100 million last year. No relief was expected from higher import duties this year, the company said.

Lawrence De Maria, a William Blair analyst, said the 2019 forecast was "indicative of slowing growth and a maturing cycle that implies peak markets, and effectively may put a lid on any cyclical industrial rally for now."

In the quarter, the Deerfield, Illinois-based company reported an adjusted profit of $2.55 per share, well below the average analyst estimate of $2.99, according to IBES data from Refinitiv. Total sales and revenue in the quarter rose 11 percent year on year to $14.34 billion.

Manufacturing costs shot up by 3 percentage points in the fourth quarter from the third quarter.

An increase in the provision for credit losses and write-offs in its financial products segment also cut into fourth-quarter earnings for the world's largest heavy-duty equipment maker.

The company posted lower-than-expected earnings for the first time in ten quarters, helping propel a sell-off in broader stock markets. The Dow Jones Industrial Average. was down 1.2 percent.

Chief Executive Officer Jim Umpleby told investors on the call that the company was closely monitoring costs and was in better shape to handle any market downturn.

Volatile oil prices brought down Caterpillar's order book in the last quarter by about $800 million from the September quarter.

The company expects volatile oil prices to hurt its energy and transportation business this year. However, it anticipates that higher commodities prices will continue to drive capital expenditures in the mining industry, underpinning demand for heavy construction and quarry machinery.

Caterpillar spent $5.8 billion in shares buybacks and dividend payments and $1.17 billion in capital expenditure in 2018. It ended the year with a cash balance of $7.9 billion.

(Reporting by Rajesh Kumar Singh in Chicago and Rachit Vats in Bengaluru; Editing by Sriraj Kalluvila and Jeffrey Benkoe)