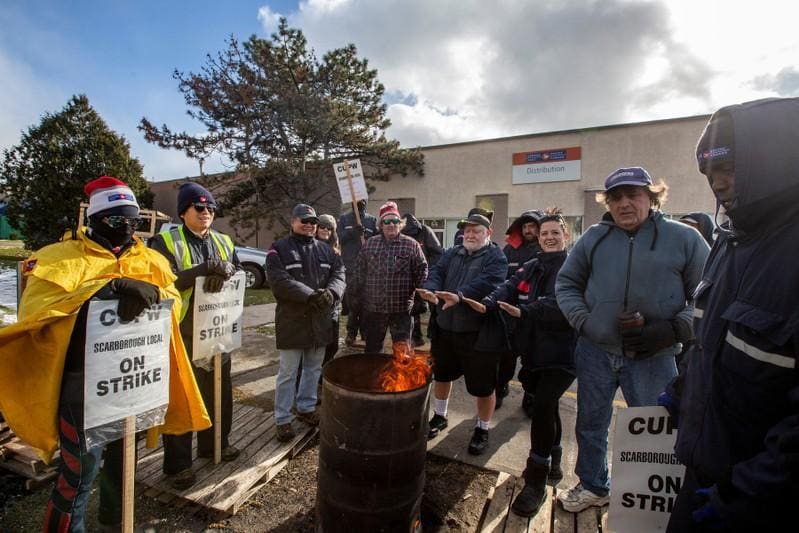 TORONTO (Reuters) - A month-long strike by Canada's dominant mail operator ahead of the holiday shopping season has led online retailers to turn to pricier couriers and warn of delays that could make customers think twice about online shopping.

The strike by Canada Post employees, who deliver two-thirds of e-commerce orders in the country, is weighing on Canadian retailers trying to step up their online business to compete with the likes of Amazon.com Inc and eBay Inc.

Some retailers such as Canada Goose Holdings and Lululemon Athletica have turned to couriers like United Parcels Services and FedEx Corp to maintain timely deliveries, according to their websites, while others, including Amazon, have warned of delays.

Profit margins of retailers could come under pressure from use of courier companies, although in some cases bigger retailers may be able to negotiate more favourable terms, analysts say.

Canada Goose, Lululemon, UPS and FedEx did not immediately respond to Reuters queries regarding the impact of the strike on demand. Amazon is monitoring the situation, and potential delivery delays are reflected at checkout, a spokesman said. He added that Amazon uses a variety of carriers.

Retailers are hoping a government pledge on Tuesday to introduce a bill in parliament to resume mail services will help rescue this year's holiday shopping season. The legislation, if passed, would force employees back to work even if they do not reach agreement with Canada Post.

"It's a matter of averting the crisis before it becomes full-blown," said Karl Littler, spokesman for the Retail Council of Canada (RCC), adding that parcel volumes double over the holiday season.

A quarter of Canada Post's total package volume comes in November and December, the group said last week. The carrier this week warned of hundreds of unloaded trailers, a number disputed by the union.

While couriers and other delivery services will help bridge a gap, it will mean added costs, particularly for smaller retailers.

Despite the disruption, eBay's early Black Friday sale on Wednesday saw strong demand from Canadian buyers who are planning around the disruptions, Stairs said.

If delivery disruptions persist, brick-and-mortar businesses and services could benefit. "For e-commerce operators, if the strike and service disruptions persist through Christmas, it's an unambiguous negative," said Brian Madden, portfolio manager at Goodreid Investment Counsel, who holds some Canadian retail and FedEx shares.

Ed Sonshine, CEO of RioCan REIT, one of Canada's biggest property trusts, expects a modest increase in traffic at its malls if the strike isn't resolved by next week. If delays continue, some customers may turn to online purchases that don't require delivery, such as gift cards or experiential gifts such as event tickets, which could either postpone revenues or dent earnings, Goodreid's Madden said.

Still, the effect is unlikely to be dramatic, he added. "A certain amount of boxes are going to need to appear under the Christmas tree," Madden said. "There's a certain baseline amount of retail purchasing that can and will and must go on because it's Christmas."